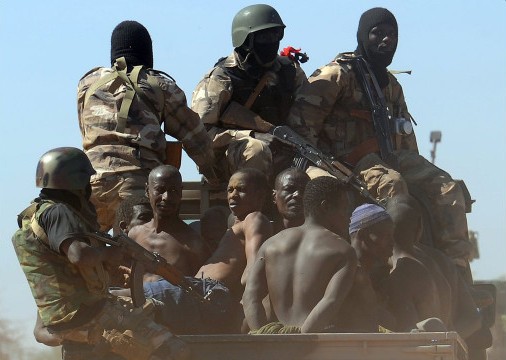 By Zoe Gorman
When extremists began taking over the north of Mali and proclaimed the jihadist state of “Azawad,” the international community thought it could take its time. Media attention to an ongoing security, humanitarian and economic crisis is dissolving as French forces withdraw from the troubled region. Few Americans can point to the arid West African nation the size of Germany on a map. But Saturday, as Malian musicians Amadou and Mariam began playing pleas for peace — presented as indie rock melodies infused with Afro-beats — thousands of New Yorkers at Brooklyn’s Prospect Park started to take notice.

Before the crisis, Mali granted more record label contracts than any country in Africa. Famed for an Afro-fusion that mixes traditional instruments and styles with modern ones, northern and central Malians suffered a ban on all music, in addition to beatings, amputations and stoning at the hands of Al Qaeda in the Islamic Maghreb and Ansar Dine. But judging from Saturday’s attentive, cheering crowd — who did not seem to mind being addressed in French — music might be Mali’s greatest weapon yet.

“The corrupted in politics…The dictators in politics, it’s not okay. We don’t want them,” the band sang out in French.

The blind husband-wife duo geared the concert set list and commentary to raising awareness about Mali’s broken political system and ethnic woes. Once Mali’s greatest aid partner, the United States has withdrawn a rough billion in development projects and aid programs since March 2012’s regime-toppling military coup, on the basis that the US will only send immediately critical, life-saving aid to countries governed undemocratically. As Mali scrambles to pull together elections next month, USAID is carefully considering which programs to reinstate. Amadou and Mariam’s politically charged US tour could inspire private American donors to fill in some of the gaps.

Part of Celebrate Brooklyn’s free summer concert series, the event featured simple, catchy vocal melodies, bluesy guitar riffs, and two superb drummers — one playing by hand, the other jamming on a rock kit that substituted traditional drums for toms. Mixing French, local Bambara and occasionally English, Amadou and Mariam sang stories from life in Mali’s capital, Bamako with call-and-response vocals interspersed with upbeat, rhythmic riffs. The band is not new to advocating for peace — they played at the 2009 Nobel Peace Prize Concert — but since the Mali crisis, their songs are striking closer to home.

While the duo has earned spots on world music charts and a Grammy Nomination, most of its fan base resides in Africa and Europe, where the group’s first album to be released in the US, Dimanche à Bamako (2005), already charted second in France. In an effort to cultivate a larger audience in the US, the band collaborated with New York guest artists such as Santigold on its most recent album, Folila, while maintaining its traditional strengths by excluding a Western drum get for djembe and doumdoum drums and adding Malian string instruments such as the n’goni and kora. On Saturday, the band stuck to electric guitars.

The concert espoused social activism and crisis resolution at every turn and provided perspective from both sides of a conflict recurring since droughts in the 80s, which threatened the northern nomadic lifestyle, called into question the Malian and Nigerien governments’ neglect to develop the Sahel region. The internationally acclaimed guitarist opener, Bombino is a member of the very ethnic group rebelling in the north of Mali, although he hails from neighboring Niger. Bombino sang of geopolitical struggles of the Tuaregs in the group’s language, Tamasheq. Garbed in traditional headwear popular in the Sahara, the budding legend flaunted superb blues-rock guitar soloing over repeated Arab style chord upstrokes and chanting.

The guitar has been a powerful instrument for social change among the Tuareg. Bombino first taught himself to play when relatives brought guitars back from the frontlines of the 1990s Tuareg rebellion and later studied within Niger’s Tuareg political party. During the 2007 Tuareg rebellion in Mali and Niger, Nigerien government forces killed two of his band members, and he fled to exile in Burkina Faso. Eventually, he was allowed to return to Niger but has also travelled the world advocating for Tuareg rights and respect for traditions in children’s education. His most recent album, Nomad, topped the Billboard World Music album and iTunes World charts.

Ethnic differences were a non-issue for these artists when it came to performing together — underlining the general population’s desire for peace in West Africa.

In fact, the concert demonstrated music’s ability to find common ground among people from all walks of life. The crowd, composed of swaying West African natives, French New Yorkers, Brooklyn families, Yale professors and music enthusiasts young and old gathered together to take part in this celebration of cultural tradition and innovation.

The message woven into the fusion-style music told New York that, in the face war, extremism, military coups and a politically stagnant state, the people of Mali could adapt and endure, preserving cultural strengths while adopting modern capacities. When it came to music, perhaps Al Qaeda was right to be afraid. Because somewhere amidst the audience’s invigorating pulsing to amplified guitars, African percussive rhythms and multi-lingual lyrics, these artists managed — for a fleeting moment — to give West Africa the spotlight it deserves.
Zoe Gorman contributed this piece.