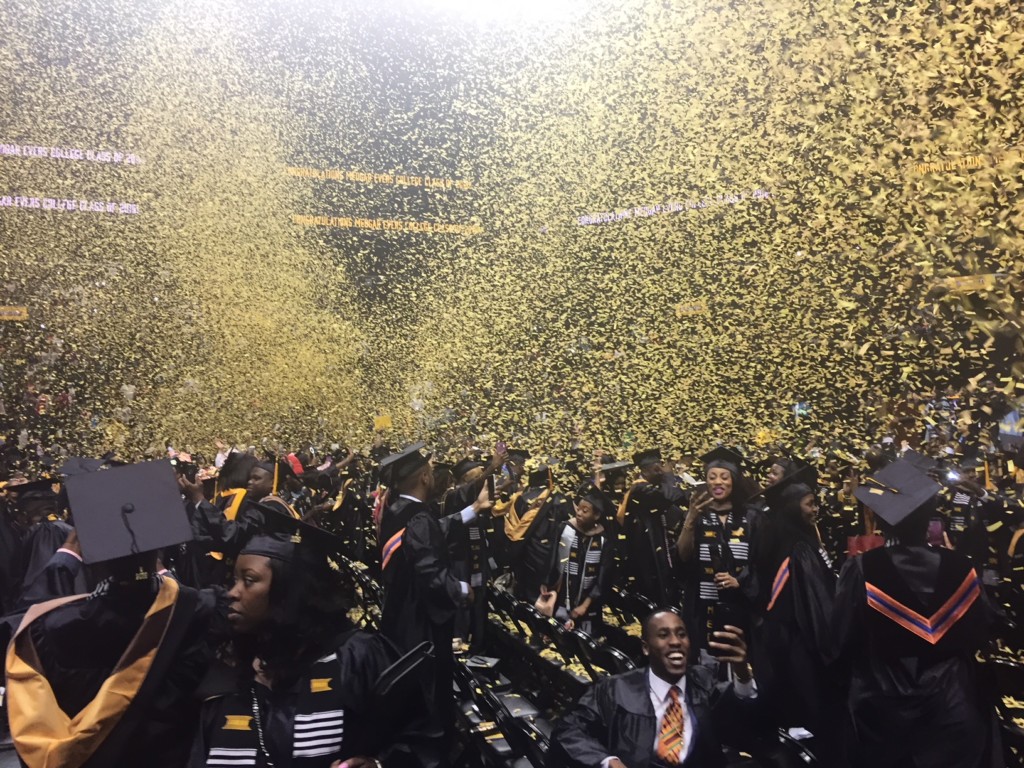 In 1989 Douglas Wilder of Virginia became the first African American to serve as governor of a state in the United States. Apparently unfazed by that record, Wilder famously said “being first doesn’t mean a thing except if there is a second”

Wilder’s record-breaking achievement and sentiment manifested again in 2006 when Deval Patrick of Massachusetts was elected governor and he served from January 2007 to January 2015.

Being the second ever African American Governor in the United States, Patrick understands that the struggle of the black race was far from over, hence his advice to fellow Americans to commit to public service.

“Pass it on”, the former governor told his audience at the 47th commencement address of Medgar Evers College of the City University of New York held at the main arena of the Barclays Center in Brooklyn, Monday.

Patrick enjoined the graduands and spectators to strive to “lift others up as you climb”, citing the importance of helping others like many Americans who sacrificed so much for the current generation.

Obviously, the graduands who are mostly people of color possibly represent a collection of firsts to attend college in their different families. On the basis of that assumption, the former governor maintained that the graduating class of 2018 needed to make their leadership count in their communities.

We cannot lose the thread that holds us together, Patrick said and emphasized that “any success we achieve today is not ours alone; It has been possible because others helped you, an echo of “you didn’t build that” that Obama’s critics used against him in 2012 reelection campaign.

His speech made reference to the current national discourse that mostly runs counter to the founders’ creed – E Pluribus Unum (“Out of many, one”) and warned of the temptation to measure success by the number of social media followers or other online endorsements. Whether this is a jab at President Trump’s preoccupation with twitter is not clear.

He spoke of the need for civic literacy and embrace to public service with all its challenges – a situation that has the potential to improve civil discourse and participation in the polity. Patrick’s speech echoed themes in the book Bowling Alone in which the American political scientist, Robert Putnam lamented the breakdown of community in the American civic life.

Earlier in his address, the President of the College, Dr. Rudolph F. Crew touted impressive milestones recorded by the school within his tenure notably the implementation of a strategic plan to improve retention and increase graduation rates in the college.

Other speakers at the event included Dr. Augustine Okereke – the Provost and Senior Vice President, Academic Affairs of the College and other faculty members.

Observing the graduates, it clearly shows that the college needs a more diversified student body so that it doesn’t appear to be a college exclusive for people of color. Admittedly, the school bears the name of black civil rights leader of his time but it will certainly be delighted even in his grave to learn that the racial justice and inclusive society he fought for is finally being achieved when young men and women become color blind in their educational aspirations.

The triumph of Medgar Evers and other black people will be the day when all children – white, black, brown, blue enroll in this college on a nearly equal ratio. After all, Martin Luther King Jr. dreamt of the day “my four little children will one day live in a nation where they will not be judged by the color of their skin, but by the content of their character”.

Highlights of the commencement ceremony included the award of certificates to all 1200 graduating class of 2018 spanning several fields. The commencement speaker, Mr. Patrick received an honorary doctorate degree in Law while the President, Dr. Crew was bestowed with a unique honor from The Falcons New York – an elite club of African immigrants.

Dr. Crew received the title of Okosisi – (a rare accolade bestowed on outstanding achievers in the Igbo nation of South East Nigeria) to acknowledge the president’s strong leadership.