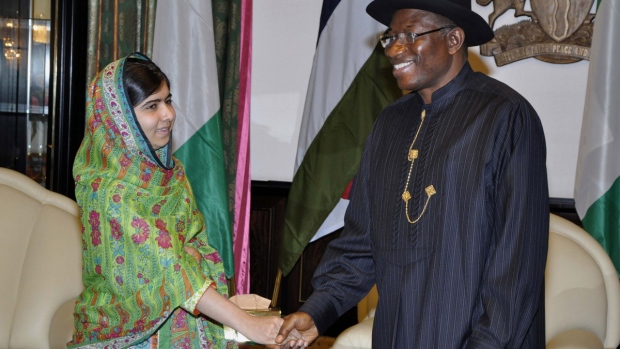 “Nothing kills a bad product faster/quicker than good advertising” is a popular advertising adage. The adage means that good advertising makes people aware of a product, but if the product isn’t any good, then it will be rejected by consumers.

In a 1965 interview with the Wall Street Journal, renowned advertising guru, the late Bill Bernbach put it more succinctly when he said that “great advertising can make a bad product fail faster; it gets more people to know it’s bad”.

It is with this lens that I view the ongoing controversy about engaging a Washington DC based Public Relations firm and the young child prodigy, Malala Yousafzai to help massage Nigeria’s image abroad.

The Pakistani teen who survived a Taliban assassination attempt in 2012 marked her 17th birthday Monday with a visit to Nigeria and urged Islamic extremists – Boko Haram to free more than 200 schoolgirls under the group’s captivity.

According to news reports, Levick—the PR firm purportedly hired by the News Agency of Nigeria to revamp Nigeria’s image in the wake of President Jonathan’s bashing in the international media acknowledged that while it had no hand in arranging for Malala’s visit to Nigeria, the PR firm assisted in bringing parents of the kidnapped girls to meet with Malala Yousafzai, who has become an international symbol for women’s rights.

This is classical double speak common in public relations and international diplomacy. It also reveals how the company is sensitive to the challenges of advertising a product that is so conflicted. Even without a reliable opinion survey, it is certain that a majority of Nigerians is opposed to the $1.2 million dollar image making deal between Levick and the Nigerian government.

Twiiter is abuzz with derisive comments about the deal with the hashtag #SomeoneTellLevick that began trending in Nigeria in response to an image laundering deal between Washington, DC-based public relations firm, Levick, and President Jonathan.

The deal is currently receiving serious scrutiny in the Nigerian media. The popular upstart online newspaper – The Cable recently x-rayed the image making firm and exposed its past dealings. In a recent publication entitled “Five facts about Levick” cable pointed out the notoriety of the company in swimming in troubled waters and with a reputation for salvaging image of deeply unpopular countries. The fear however, is that the deal in Nigeria might degenerate to a situation whereby a public relations firm may need to hire a firm to clean its image after the details of its deal with Nigeria become very clear to the public and the world.

Using the Pakistani Malala Yousafi to salvage the image of the government actually backfired because the girl’s visit to Nigeria revealed that Jonathan was yet to meet with parents of the kidnapped girls. I watched on BBC television as one of the parents expressed outrage at the ignominy with which the government treated them so far. In her view, the story would be different if the kidnapped children belonged to prominent Nigerians such as senators and top government functionaries.  The president would have visited them, she said. It is because we are powerless, the distraught woman lamented. What a public relations disaster! For months, the president and his advisers did not deem it necessary to show some empathy in a public sense by visiting the homes of the parents of the kidnapped kids. Even if it is just a photo opportunity to show the world and Nigerian citizens that the government cares. Now it turns out that Malala got a 17th birthday gift from President Jonathan who then promised to visit the families of the kidnapped girls. It is a victory for the brave Pakistani rights activist but an exposure of the government’s insensitivity to the hopes and aspirations of its people. Imagine for a moment how Barack Obama or Bill Clinton would have handled the situation. Sure, either president would have gone to visit those homes and hugged the parents in a classic show of emotion and concern. This should be instructive to Levick. The company has a lot of training to do for Nigerian leaders to learn how to humanize themselves and show emotion on TV cameras. PR 101 for Nigerian leaders!

Another aspect of the deal that is troubling is the fact that New Agency of Nigeria is put in the front as the agency that facilitated the deal. The firm is doing the job News Agency of Nigeria (NAN) is supposed to do better if they got $1.2 million. Early this year, I lost contact with Edwin Okafor the head of New York Bureau of NAN and upon inquires I learnt he was recalled to Nigeria for reasons related to lack of money. His departure also coincided with the period Nigeria was president of United Nations General Assembly and that meant that Prof. Joy Ogwu, Nigeria’s top diplomat did not have news coverage with Nigerian lens. To date, NAN has no correspondent in North America because of shortage of resources but the same NAN could hire a PR firm for $1.2million to do exactly what NAN was established to do. A contradiction indeed.

Everything considered, the Malala Yousafi visit to Nigeria was good diplomacy that once more brought the attention of the kidnapped girls to the world. As I mentioned in a previous write-up, the short attention span in the media remains a challenge because it blows like wind and the cameras pan away from the pressing issue to multi-faceted issues demanding attention in the world. Earlier, the “bring back our girls” slogan became an international media buzz only to fizzle out after some time and the girls are still in captivity. It is good to have good image especially for organizations and governments but organizations and governments cannot achieve good image by creating or sustaining practices that are antithetical to public acceptance. To build an international image, a country must first build a good domestic image. As far as image making for Nigeria is concerned, Levick may find it difficult to make something out of a whited sepulcher.