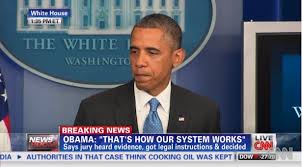 George Zimmerman’s acquittal in the murder of the unarmed teenager, Trayvon Martin is an example of those instances the courts may give you justice but not peace. Yes, Zimmerman got a non-guilty verdict from the criminal justice system but an overwhelmingly guilty verdict in the court of public opinion, further exacerbating the age-old tension between morality and law. Politics and ideology aside, almost everyone are in unison in condemnation of the murder of Trayvon.
Many Americans including The President of United States, Barack Obama added their voices to the senseless murder.

Indeed, the murder of the 17 yr old teenage black boy Trayvon Martin, and the verdict left me and many other black parents aching. It is really a cause for pained sadness to anyone to see the flagrant disregard of human rights inherent in some of these gun-toting laws. I have read many commentaries in the media and internet that are eloquent and deeply centered in the heart. Indeed, most of them are powerful in the way we need this conversation to be rooted in strength, sadness and determination.

This homicide touches me personally because I have 2 teenage black boys and want to share the ache and in sharing, clarify it and support the integrity of it. I pray that this event, this tragic loss will serve as the beginning point of a new world. It is time for all of us to move together. I am just one person, but there are a lot of “ones”. We will make the change we need together, beginning now, and this will be a fitting monument for young (late) Mr. Martin.

I don’t know what you should say to your sons, or your daughter. You are all fine fathers and will find the right words to tell your children but most of all empower them with self confidence, compassion, empathy and courage. Be fearless and gentle, is all I can come up with. Fearless through faith…per fidem intrepidus, gentle and wise. Like dad. This young man’s death was not in vain as he has brought forth awareness to Americans that racism still exist no matter how much we deny it. To trivialize this reality and deny its existence is wrong. It is disingenuous and fallacious. It undermines this nation’s ability to make peace with each other. However, remind them that not all white people are racists, those that are, are few.

Tryvon’s death will not go unnoticed…it will come to mean something and hopeful change the way people look at one another. Remember the only way Trayvon will rest in peace is if we somehow come to peace with his death. One by one we will make a difference in our world and Trayvon has already done so.

The judicial system did more than fail. The system never intended to protect Trayvon Martin. It intended to allow George Zimmerman to kill him. Allowing the use of deadly force so long as a person “believes” their life is in danger has little to nothing to do with self-defense. It is a justification to pull the trigger. Deadly force does not have to be present, only the “belief” that it is present. The burden of proof for such condition is essentially non-existent. Just like “He was going to kill me with his umbrella” or some such nonsense. What has happened with this insane stand your ground laws is that they have taken gun ownership to its ultimate end. The gun crowd is creating a world where not only can anyone own any type of weapon, and not only can they carry it anywhere, they get to pull the trigger whenever they feel they need to, regardless of the actual conditions facing them.

No, the system did not just fail Trayvon Martin. It has failed all of us, black parents especially, and put all our lives at risk….just because some powerful Americans misunderstood the written clauses in the 2nd Amendment of the US constitution. They treat the US constitution like they do their bibles…pick and choose the lists they like, invent the rest and claim Jesus said it. There is a silent and deeply pained screaming against this hypocrisy. It is time for that often silent but fair and reasonable majority to scream against these laws and this inequality in the judicial system. Glad that the President of the United States, President Barack Obama has added a powerful voice to this. Pas it on.

Pax vobiscum …peace be with you all.