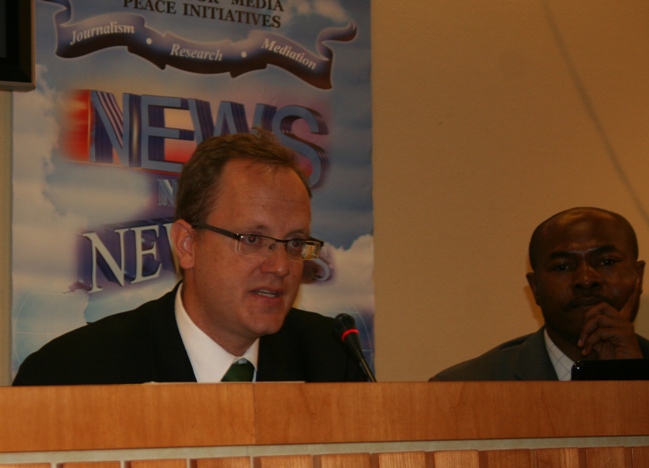 Will Stevens speaking at the CMPI Dialogue in New York

I bring you greetings from Secretary of State John Kerry and Assistant Secretary of State for African Affairs, Ambassador Greenfield. Also to mention that President Obama and Secretary Kerry appointed former Senator Ross Feingold as US special envoy to the Great Lakes. That speaks to the special attention that the Obama administration is paying to solving the difficult problem of the region. Senator Feingold has 18 years in the Senate and chairman of the subcommittee for Africa in the US Senate.
I’m going to talk about a broad swath of US policy towards Africa. I want to talk more about messaging. I really like the name of the organization – Center for Media & Peace Initiatives. I want to talk about media which is really what I do. It is my job to communicate about our policy; our policy to the media and to interested parties like you and to foreign governments. So I work in the public sphere which isn’t what a lot people associate with public diplomacy. When people think of diplomacy, they think of back room deals etc and that doesn’t work anymore. There is no more back room deals anymore as we are learning; there are no secrets any more as we read on Washington Post. My job is becoming increasingly challenging. It used to be that someone will decide a policy and come to us and say “go tell people this; make it sound good; go spin it. Now they come to us and we say wait a minute and we say if you want to do this how is it going to play out in the public? So we want to talk about the role of the public sphere in diplomacy, peace, and conflict.
Before I do that I want to relay an anecdote from one of my personal heroes – former Secretary of State Collin Powel who was US top diplomat when I joined the Foreign Service; he swore me in as Foreign Service officer. He relayed in one of his books on leadership an amazing story of what I consider the value of an effective message. He was visiting NASA in the 1960’s as a young military officer. He was there and started a conversation with someone who was working there and the guy was cleaned up a little bit. And Powel asked him what your job is? And the guy said “I’m a janitor”. He asked further: What do you do? And the guy said he was helping put a man in the moon. That man who we may consider to be doing a menial job understood his mission and his mission was the mission of the organization. This was correctly communicated to him and it was understood by him that keeping the floors clean was essential to the engineers to devise a solution to build a rocket that will get a man into the moon. It was that simple! Those kinds of simple messaging are the ones that can be taken home most easily.
We learned in business schools about messages being specific and having goals. It also works in our messaging about policies. A good and powerful message has the ability to unite stakeholders and focus attention. It helps us work together and this is incredibly important to talk about foreign policy goals. These are big goals- goals that involve the collective effort of an entire community, country, multi-lateral organizations, aid organizations, the private sector, NGO’s etc. We have to have clarity on the message; its objective, and what our role is in the success of that goal. So when we do that we talk about three things that we have responsibility as communicators. I think we are often communicators; just as there are no more secrets, there is no one that has communication jobs anymore; they communicate every day. To talk about three things we try to do: we inform, we engage and if we are successful in the first two we influence.
That is how we define our policies; how we define it and how are we are able to best articulate these policies. Every day I go through this very difficult process and I have lost some hair since I started work in this office a couple of months ago.

Being excerpts of a presentation by Will Stevens, Chief of Public Affairs, Africa Bureau, US State Department at the CMPI Dialogue in New York. Details of his presentation are contained in the report of the conference due to be released soon.