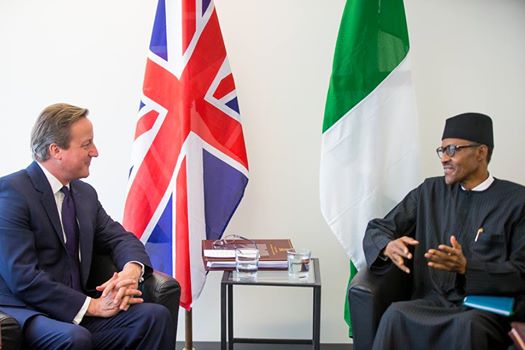 In one of those rare moments of truth, Prime Minister of United Kingdom, David Cameron described Nigeria and Afghanistan as “fantastically corrupt” in a conversation with the Queen prior to last week’s anti-corruption summit in London.

“We’ve got some leaders of some fantastically corrupt countries coming to Britain… Nigeria and Afghanistan, possibly the two most corrupt countries in the world,” he was overheard saying in a hot microphone gaffe that was clearly undiplomatic.

President Mohammadu Buhari in a response to the charge during an interview with CNN’s Christiane Amanpour acknowledged the Prime Minister’s honesty in the assessment of Nigeria’s profile in relation to the scourge of corruption in the world. Unlike a senior Afghan official who denounced Cameron’s characterization as “unfair”, Buhari put aside political correctness and admitted that he leads a bunch of corrupt people. However, in another reaction, Buhari spoke of how embarrassing Cameron’s comments were to Nigerians and framed the Prime Minister’s views as tainted with colonial rhapsody.

The truth is that corruption is a global problem and not just a Nigerian problem, hence the rationale to convene a global anti-corruption summit in London – the capital of Western financial system that supervises international financial shenanigans. If Nigeria is “fantastically corrupt; Britain must be quixotically corrupt.

Instead of disparaging remarks about Nigeria’s scale of corruption, it is instructive for Cameron to consider the biblical injunction to “get rid of the log in your own eye; then you will see well enough to deal with the speck in your friend’s eye”. Britain is corrupt and so do the United States although the scale cannot be compared with what goes on emerging countries. As the Panama Papers leak indicated Prime Minister Cameron’s father was implicated in offshore investments in tax havens that are largely British Overseas Territories. The Economist, the influential UK-based publication in a ‘crony capitalism’ corruption index compiled last week, ranks Britain higher than Brazil and the USA. Crony capitalism is a term used to describe an economy in which success in business depends on close relationships between business people and government officials. In the report, The Economist suggested that in the wake of globalization, “there had been a surge in billionaire wealth in industries that often involve cozy relations with the government, such as casinos, oil, and construction”. Also in the United States, the 2009 celebrated case of Abraham Madoff’s Ponzi scheme defrauded fellow Americans about $50 billion dollar in scam investments.

The difference between corruption in emerging countries and advanced democracies is that while ordinary citizens in poor countries engage in elementary corruption to feed their families and pay school fees for their children, the elite in richer countries not only enable corrupt practices in poor countries and their countries not to attain basic needs of life but for ostentatious living. While corruption cannot be excused under any circumstances, Cameron’s disgraceful comment about the scale of corruption is equivalent to the way the menace is viewed in Nigeria. For example, a clerk in the civil service faces punishment for misusing the money meant to buy cleaning soap for the office, but the Permanent Secretary is not punished for taking thousands of naira in kick back or for employing fellow citizens to serve the same government. In the same way, it seems that richer countries choose to ignore the extent of corrupt behavior in their countries and choose to focus more on poorer countries, lump everyone in one box, and inadvertently undermine the psyche of people struggling to climb the ladder of opportunity.

No matter how corruption is analyzed, it is a global problem and tackling it requires collective global effort instead of labeling any country with disparaging comments like Cameron did to Nigeria and Afghanistan. In his speech at the London anti-corruption summit appropriately titled “Why We Must Tackle Corruption Together”, President Buhari pointedly urged the international community to move faster on the dismantling of safe havens for the proceeds of corruption and the return of stolen funds and assets to their countries of origin.

In what appears like a mea culpa, Cameron reechoed Buhari’s exhortation and admitted that the West shared in the responsibility for pervasive corruption in the world. In his view, the fact that stolen money finds its way into London and New York and dumped in banks, real estate, and in murky businesses underscores the culpability of the West. The Prime Minister’s thinking is supported by the revelations in The Panama Papers that showed that people around the globe have been using anonymous, offshore shell companies and other entities in order to hide their business and assets from authorities. Some bad actors – like drug cartels, terrorist cells, or some wealthy individuals – have used shell companies and offshore accounts to evade taxes, launder money, or finance terrorist activity.

Today, foreign companies owned about 100,000 properties in England and Wales and that more than 44,000 of these were in London. The figure is obviously higher in the United States and such transfer of ill-gotten wealth is largely responsible for the high cost of real estate in mega cities in the West with unintended consequences to the average middle class family that is often priced out of the market.

Happily, the Obama administration and UK government say the commitment of both countries to transparency couldn’t be stronger. While Washington proposes legislation to require shell companies to report information about their real owners to the Treasury Department, the Westminster government is introducing a code of conduct for professionals such as accountants, solicitors and estate agents who enabled corruption, either knowingly or unknowingly. Although these steps are commendable, it is regrettable that it might not go beyond the boisterous administrations of Cameron and Obama who is almost out the door. The reality is that entrenched interests in the West – mostly the oligarchs and plutocrats thrive on the stolen money from poor countries directly and indirectly. They have everything to lose if corruption is eliminated and everything to gain if the status quo is maintained.

It is this kind of despair and hopelessness in the fight against corruption that makes Buhari’s rather comical response to Cameron’s “fantastically corrupt” gaffe poignant. President Buhari told the world he wanted ‘action’ by Britain to hand back stolen assets hidden in London rather than an apology for the disparaging remarks made by the Prime Minister. Indeed, African countries are familiar with the insults and indignities from former colonial governments. What will make a difference this time is to match action with words. It is hard to believe that the secret services of Britain and United States do not have ideas about money stashed away in their countries by former and present African leaders. The courage to reveal and repatriate that kind of hidden wealth will test the resolve of Western leaders who continually advocate anti-corruption prescription to emerging countries.

The Orphaned American Voter in 2016?