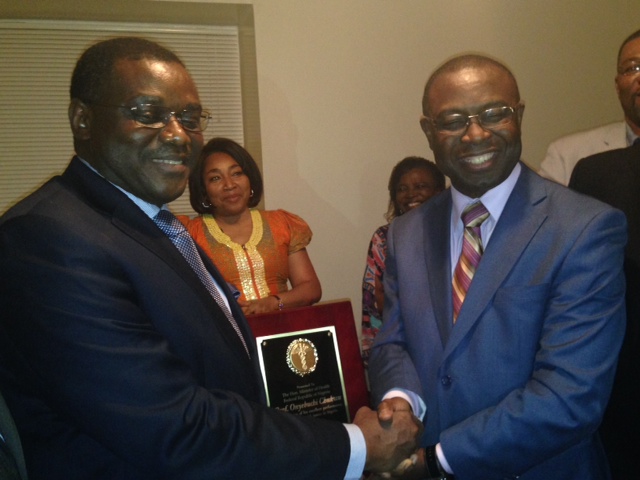 According to Dr. OnyebuchiChukwu, his country has completely eradicated Ebola and is currently providing strong support to make the disease a thing of the past in Africa and around the world.

The Minister spoke at a reception in New York organized by the Falcons – an elite group of Nigerian-American professionals in the US during his visit to address the United Nations on Nigeria’s committed effort in fighting the disease.

“So far as there is one Ebola disease in the world, no one is free, no matter where you might be” the Minister said.

Dr. Onyebuchi used Nigeria’s experience with Ebola to illustrate his point: “Ebola was brought to Nigeria by a visitor who flew into the country and given the fact that every country has airports, it is possible that infected persons could also migrate to other countries to spread the diseases and this is why the eradication of the disease should be a collective international effort” the minister told his audience.

The elated Nigerian Health Minister was proud to announce that there is “no single case of Ebola” in the country and paid glowing tribute to President Goodluck Jonathan and other members of the health team to devising effective strategies to put a stop to the spread of the disease.

In the words of Prof. Onyebuchi Chukwu, “the country’s success in eradicating Ebola is a testimony to the resilience of Nigerians and evidence that the country could do great things if it chose to do it” but often refuse to do the right thing.

The visiting physician who was trained in Nigeria used the opportunity to burnish the country’s credentials in terms of reforms taking place under the Jonathan administration. “Things are changing; it is no longer business as usual” Onyebuchi Chukwu maintained.

The minister decried the incidence of conspicuous consumption in the country, pointing out with regret that Nigerians had the habit of consuming more products than they produced adding that any nation  focused more on consumption of foreign products without commensurate effort at producing would hardly go far.

From procurement system to the introduction of national identity card scheme, the minister stressed that the country was set to stem the scourge of corruption and sharp practices that have undermined the credibility of the country in the comity of nations.

He implored Nigerians living abroad to join hands with the government to change the face of the country through introducing workable innovations in the country, saying that the president acknowledges the value of Nigerian talents abroad.

Among speakers at the event included Comrade Emma Idima, a Bronx resident who aspires to represent Isuikuato/Umunnochi constituency in the Federal House of Representatives in next year’s election in Nigeria, Dr. Uchenna Ekwo, President of Center for Media & Peace Initiatives, Dr. Augustine Okereke, the Vice President for Academic Affairs and Provost of Medgar Evers College of the City University of New York who presented a plaque of appreciation on behalf of members of the Falcons Club.

Exchanging views with the legislative aspirant, the minister wished Mr. Idima well in his campaigns but reminded him that some Nigerians who returned from foreign countries to participate in partisan politics had often disappointed the electorate and expressed the hope that Idima would not fall into the temptation of political malfeasance when elected.

The minister was accompanied to the occasion by top officials of the Federal Ministry of Health.