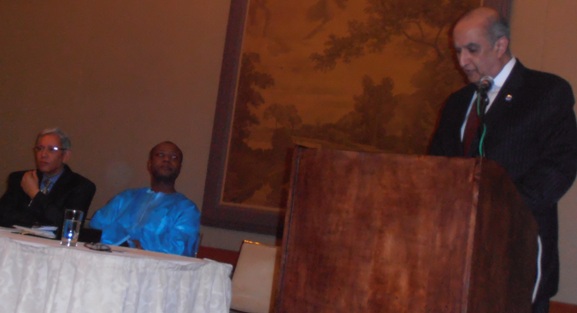 Under-Secretary-General and Special Adviser on Africa Ambassador Maged Abdelaziz says international media’s obsession with negative events and issues in Africa was unhealthy and counterproductive to the continent’s determination towards sustainable growth and development.

Maged was responding to a question on the image of Africa and the need for a virile media system to tell Africa’s story with less drama at a forum in New York organized by Africa Development Institute.
He acknowledged that oddities from Africa often made international headlines and such portrayal has the potential to scare international investors from the continent at time when Africa has posted impressive records in socioeconomic improvements.

The Special Adviser to United Nations Secretary-General on African Affairs explained the goal of the newly revitalized Office of Special Adviser on Africa. According to him, the office advocates on behalf of Africans on matters of investment opportunities and creating the enabling environment for economic development of Africa by networking with relevant business leaders and policy makers around the world.

Maged, an Egyptian extolled the impact of Africans in Diaspora on development across the continent and welcomed the decision of African Union to make Africa Global Diaspora as the 6th regional grouping in the governance structure of the continental organization. The other five structures are groupings representing North, South, East, West, and Central Africa.

The announcement that China built and donated the new headquarters building of Africa Union in Addis Ababa valued at over 200 million dollars did not go down well with some members of the audience. It raised the specter of Africa’s dependence of foreign aid, a trend that has dogged Africa’s true independence from foreign powers.

His Excellency Maged Abdlaziz, Special Adviser on Africa
Obviously, the China’s “gift” to Africa is a Greek gift. With the growing influence of China in Africa’s economy and concerns for re-colonization of Africa, the symbolism of donating a headquarters office building to Africa could not be more disconcerting.
Although Ambassador Maged discussed efforts by Africa to overcome over dependence on foreign aid, he did not address China’s new love for Africa and her resources.

He, however, addressed other colonial vestiges that impair the continent’s growth. For example, he would want to see direct connections among African countries by road and air transportation.
“When I want to travel to Abidjan, there is no reason why I have to go through Paris instead of having a direct flight to Senegal”, the Ambassador said.

Our correspondent also notes that for anyone to make telephone calls to most francophone countries the calls are often routed through France.
USG Maged Abdelaziz at the Africa policy speaker series