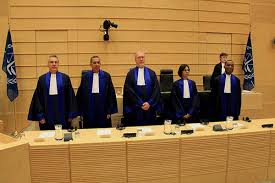 By Lawrence Freeman
Led by the Ethiopian Prime Minister, the Ugandan President, and the Kenyan Parliament, a growing chorus of voices and actions are being taken against the International Criminal Court (ICC) including efforts to have the 34 African nations that signed the Rome Statue treaty, which created the ICC, to remove themselves from the court considered by some commentators to harbor racial prejudices.

Eleven years after the ICC was established in 2002, all eight cases that the ICC has decided to investigate and try involves only African countries.
This movement against the ICC coincides with increasing demands by the West, led by the US, Great Britain, and France to intervene militarily against nations under the pretext of “responsibility to protects-R2P” first called for by Tony Blair. Liberal-hawks in the Obama administration who supported military interventions out of so called “humanitarian” concern exploited R2P for the purpose of overthrowing Libyan President Muammar Kaddafi. This illegal deployment has all but turned Libya into a new “Somalia like failed state;” an ungovernable state dominated by various Al Qaeda linked militias, which has also caused hell throughout the Sahel by providing insurgents with modern weapons from Libyan arms depots.
This anti-ICC counter offensive includes the following:

* September 25, 2013-Hailemarian Dessalegn, Prime Minister of Ethiopia, and rotating chairperson of the African Union, in his address to the 68th session of United Nations General Assembly, accused the ICC of having “degenerated into a political instrument targeting Africa and Africans.” He also criticized the United Nations Security Council for refusing to even respond to a request “to defer the proceedings initiated against President Al Bashir [of Sudan].” He went on to say that the decision of the ICC to try Kenya’s President and Vice President was “adversely affecting the ability of the Kenyan leaders in discharging their constitutional responsibilities.”

*September 25, 2013, Yoweri Kaguta Museveni, President of Uganda in his address to the 68th session of United Nations General Assembly had this to say about the ICC. “The latest manifestation of arrogance is from the ICC in relation to the elected leaders of Kenya. Many African countries supported the setting up of the ICC because we abhor impunity. However, the ICC in a shallow, biased way has continued to mishandle complex African issues. This is not acceptable. The ICC should stop. Our advice to them is from very capable actors who know what they are doing and saying. Kenya is recovering. We know the origin of past mistakes. The ICC way is not the right one to handle those mistakes.”

*September 20, 2013, Dr. Nkosazana Dlamini-Zuma, Chairperson of the African Union Commission, in answering a question at the “Africa Brain Trust” seminar of the Annual Legislative Conference of the Congressional Black Caucus in Washington DC,” said, that the AU asked the UN Security Council to defer the ICC action against Sudanese President Bashir because he was an important factor for peace in all of Sudan. Zuma explained that there cannot be justice without peace and President Bashir was necessary to help bring about peace.

*September 10, 2013, following discussions between the foreign ministers of Kenya, Uganda, Rwanda and Ethiopia, the Ethiopian Prime Minister sent a letter to the ICC arguing that the should allow the cases against Kenya’s President Uhuru Kenyatta, and Deputy President, William Ruto to be tried in Kenya. According to “The EastAfrican”, if the African states who are pressuring UN Secretary General Ban Ki-moon and the Security Council to act on their behalf against the ICC “fail to negotiate concessions…they will consider withdrawing from the ICC en masse.” Africa stat may also decide to bring the issue before the entire body of UN General Assembly.

*September 5, 2013, Kenya’s parliament voted to leave the ICC. However, for this to become official it would have to be signed by President Kenyatta, and would take one year to go into effect. Thus it would not affect the current ICC trials of Kenya’s leaders.

*At the initiative of Ugandan President Museveni, the AU will have an extraordinary Heads of State summit in October for the sole purpose of discussing “Africa’s relationship to the ICC,” where a mass withdrawal of the 34 African nations from the ICC could be on the agenda.

The creation of the ICC was never lawful and remains in violation of the sovereignty of nation states. It would be more than appropriate for Africa nations to instigate its demise. It has existed far too long already.