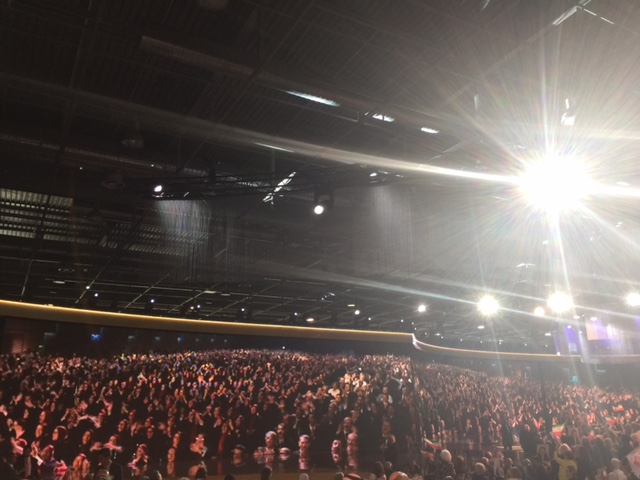 Maryam Rajavi, Leader of National Council of Resistance of Iran.

For 38 years, the theocratic regime in Teheran held sway in the vitally important Middle Eastern country of Iran and cultivated enmity with the citizens and most parts of the world due to complete disregard of democratic values of media freedom, rule of law, and respect for human rights.

At the annual gathering of the Iranian people and friends in Paris, France, speakers took turns to denounce Iran’s opaque behavior, repression of its citizens and export of extremism and terrorism around the world.

Several panel discussions that featured mostly US foreign policy and military elite highlighted the danger posed by Iran to Middle East and the whole world. In the assessment of nearly two-dozen former officials of both Democratic and Republican administrations in the US, as well as some former European political leaders, Iran is the agent provocateur in the Middle East turmoil for many years.

While Struan Stevenson, former President of the European Parliament’s Delegation for Iraq is convinced that Iran was behind every conflict in the Middle East, General Jack Keane, former Vice Chief of Staff, United States Army, believes that the “guilt feelings about past policy mistakes of US in the region” was responsible for the Obama administration’s policy of accommodation towards Iran. The containment policy of previous US administrations towards Iran in expectation of change, he argued, was misguided and not yielding results. General Keane who is also the Chair of Institute of War compared diplomatic overtures towards Iran with Samuel Johnson’s comment on second marriages in which Johnson referred to as “triumph of hope over experience”.

Admittedly, humans are always overly optimistic about outcomes in big and important matters but, the military expert denounces the Iran nuclear deal as an optimistic groupthink that will not yield any change in behavior by the Clerical regime in Teheran. Instead, the largesse from that deal has emboldened the Mullah to consolidate power and aspire towards more dominance in the region.

US Senator Joe Lieberman, a Democrat argued that while improvement in relations between Iran and US is good, it should not come at all costs and regardless of what the Mullahs did. In his view, the so-called reforms in Teheran are at best “transactional and not transformational”.

The prospect of a truly transformed Iran is possible where the citizens are allowed to elect leaders instead of cronies selected by clerics. For all the appearances of democratic election that occurs in Iran, the center of Power – the Supreme Leader Ali Khamenei and inner circle determine the outcome and not the citizens as the world is made to believe.

With the intensity of the opposition led by a woman, a genuine democratic alternative is emerging. The status quo in Iran has no place for women but the emerging consensus is that women are central to the growth and sustenance of democracy all over the world. Iran cannot be different.

It is in this connection that the tenacity and shrewdness of Iran’s opposition forces should be taken seriously. In a simultaneous rally in Paris and Albania televised around the world and broadcast in real time between the two locations, the cheering crowd of tens of thousands saw women’s leadership in action as Maryam Rajavi outlined her vision of a new democratic Iran. Listening to Ms. Rajavi were delegations from five continents – the clearest evidence yet that the whole world is united against the dictatorship in Iran and supports what may be the greatest show of solidarity for the oppressed people of Iran in exile.

But, can change in Iran come from outside or inside? Achieving support for internal change from within and providing the opposition groups outside Iran with hope and sustenance should be the strategy to install genuine democracy in Iran. The world must help in the just cause of the people of Iran. After all, the world defeated apartheid in South Africa with internal and external mobilization.

If the National Council of Resistance of Iran should succeed in its bid to oust the male chauvinistic-regime of the Mullahs, Ms. Rajavi would likely become the first female democratically-elected leader of Iran, a feat rarely achieved in a predominantly Islamic State. Benazir Bhutto was the first female Prime Minister of Pakistan and the first woman to govern a Muslim majority.

Given the nature of women, it is unlikely that a female leader in Iran will support terrorism or elimination of innocent lives to stay in power. Corruption is also likely to reduce and there will likely be greater commitment to the impoverished Iranian who struggles to eke a living in the midst of excessive oil wealth. A gender-sensitive administration in Iran will likely be more accountable to the people. Within the many years of its struggle, the National Council of Revolution of Iran must have been used to the scrutiny of the media and will likely reflect such experience in Iran should it replace the current regime in the foreseeable future.

Moreover, a new leadership in Iran will forge regional stability and harmony that were lost since the 1979 revolution that brought the present Ali Khamenei regime. Turki bin Faisal Al Saud of Saudi Arabia spoke eloquently of the historical and geographical ties that held the region together that were broken by the current Iranian regime that imposed a misguided Shiite interpretation of Islam.

The Saudi Prince extolled the mutual history of the two countries that helped in the development of human civilization but a little disingenuous in his criticism of Iran’s recent election as a sham. At least, Iran’s election displays a semblance of participation even if not legitimate but Saudi Arabia has never held an election let alone being a charade of an election. The proverbial “when you point an accusing finger, the other four points at you” is instructive. Those who call for equity must come with clean hands.

In the final analysis, democratic nations of the world should unite to wrestle power away from the oppressive regime in Teheran that has no regard for peace and ensure that ultimately a popular sovereignty dictated by the Iranian people prevails.

Compassion, Empathy as cure of Trumpism