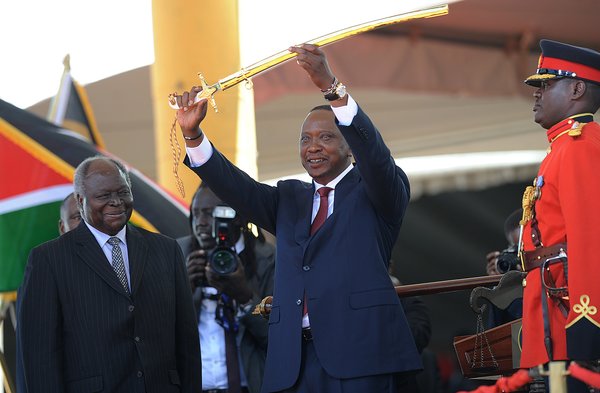 By JEFFREY GETTLEMAN
Africa’s match towards democracy took another step today as Uhuru Kenyatta, son of Kenya’s first president, was sworn in as the nation’s fourth head of state amid a full day of pageantry, with the who’s who of Africa in attendance.
But there was a certain subject that no amount of sunshine or triumphant cannon fire could blast away: the International Criminal Court, which has charged Mr. Kenyatta with crimes against humanity.
Several speakers at the event took a swipe at the external intervention in African politics. Uganda’s president, Yoweri Museveni, saluted Kenyans for what he called “the rejection of the blackmail of the International Criminal Court,” which he said was steered by “arrogant actors” to “install leaders of their choice in Africa and eliminate those they don’t like.”
Mr. Kenyatta’s running mate, William Ruto, who was sworn in as deputy president and who has also been charged by the international court with crimes against humanity, then repeated widely criticized comments made by a senior American official.
“It was said that choices have consequences,” Mr. Ruto said, referring to what many observers said was a ham-handed warning by Johnnie Carson, who recently stepped down as the assistant secretary of state for Africa, in the run-up to the elections. “And look at the consequences,” Mr. Ruto said, with a huge grin, suggesting that the warning had backfired, driving more supporters to the polls. “We won in Round 1.”
Prosecutors at the International Criminal Court have accused Mr. Kenyatta, 51, of using his vast family fortune to bankroll death squads during the chaos that exploded after Kenya’s presidential election in 2007. Mr. Kenyatta has insisted that he is innocent and that the accusations are based on gossip.
But it seems no matter how forward-looking he wants to be, his presidency, at least in its early days, is going to be dogged by what happened in the past. Several Western countries, including the United States, have signaled that they will keep their distance from him because of the graveness of the allegations, though they may have a hard time doing that because Kenya is one of the West’s most important allies in Africa.
The American ambassador to Kenya, along with other Western envoys, did attend the inauguration. But even that was interpreted by some Kenyans as a snub, because the Kenyan news media reported that China, for instance, had sent a high-level delegation from Beijing, and of course many African countries sent heads of state.

Mr. Kenyatta made a thinly veiled reference to the court in his inauguration speech, saying that “Kenya will strive to uphold our international obligations” but that these obligations must be based on “mutual respect.” He also delivered a long list of things he planned to do: give laptops to schoolchildren, fight wildlife poachers; abolish health center fees and extend electricity.
He congratulated the nation for carrying out the most complicated election in its history, and for showing patience when the outcome was delayed by problems with the vote count. He also emphasized that he wanted to extinguish Kenya’s ethnic-based politics, which often erupt in violence.
“We will not settle for a perfunctory peace that is disrupted every five years by an election cycle,” he said. “Rather, we are calling and working toward a permanent peace.”
The swearing–in ceremony, held in a packed stadium in Nairobi, capped an exhausting election period that started months ago when the country’s leading politicians split into rival camps. On March 4, millions of Kenyans streamed to the polls, some waiting for 10 hours on their feet to cast ballots.
Election officials declared Mr. Kenyatta the outright winner, narrowly avoiding a runoff, but the second place finisher, Raila Odinga, who just stepped down as prime minister, cried foul, pointing to widespread breakdowns in the election commission’s computer systems. He then challenged the results, but Kenya’s Supreme Court upheld Mr. Kenyatta’s win.
In a sign that feelings were still raw, Mr. Odinga skipped the inauguration, saying he wanted to “rest” in South Africa. One of his aides said Tuesday that Mr. Odinga did not want to bestow legitimacy on an election that he still believed had been rigged.
But other African leaders were there in force, squinting in the sun, watching an honor guard stand stiffly on the parade ground, beads of sweat trickling down their faces. Among the dignitaries were Goodluck Jonathan, Nigeria’s president, topped with a Fedora; Salva Kiir, president of South Sudan, in his signature black Stetson; and Mr. Museveni wearing a finely tailored suit and a floppy bush-fighter hat.
At the end of the festivities, after the cannon smoke had cleared and the brass horns went quiet, Mr. Kenyatta ascended the steps of an antique convertible Land Rover and made a victory lap around the stadium. He was just a high school student when his father, Jomo, died in office in 1978.
Additional Reporting from New York Times’JEFFREY GETTLEMAN