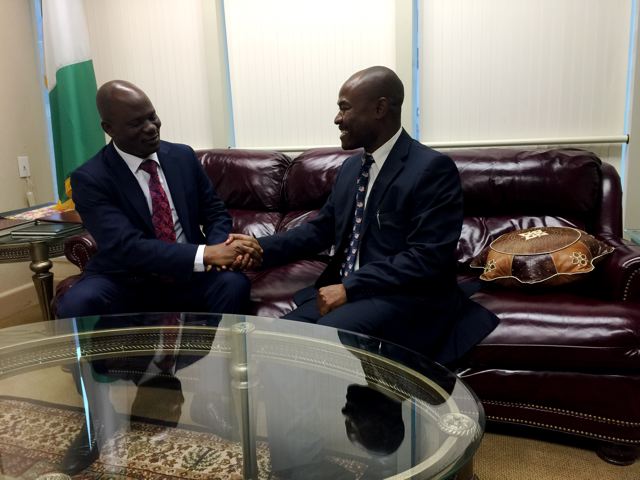 Consulate General of Nigeria in New York plans to establish a modern library within the sprawling Nigeria House located in the heart of Manhattan, New York City.

The library when established will serve as a resource center for international researchers, policy makers, investors, and others interested in learning about Nigeria- Africa’s largest economy and most populous.

The Consul General of Nigeria, Mr. B. B. M. Okoyen announced the plan while exchanging views with Dr. Uchenna Ekwo, President of New York -based Center for Media $ Peace Initiatives, during a courtesy visit.

Mr. Okoyen spoke of efforts to integrate Nigerians residing in the United States with unfolding socioeconomic changes underway in the West African country.

According to the Consul General who assumed office two months ago, his leadership is developing a comprehensive directory of Nigerians in the U.S. and their background with the goal of identifying their skills needed for development in Nigeria

“There are lots of Nigerians educated and skilled in the U.S. whose talents are sorely needed back home”, Mr. Okoyen told his guest.  Similarly, the top diplomat noted that some Nigerians who are stranded either because of certain infraction or other issues should know that his office got their back. The consulate, he said, should be able to assist interested Nigerians in America who wish to resettle back home to contribute to the nation’s progress.

In the view of Mr. Okoyen the consulate stands to protect all Nigerians in America regardless of social status, stressing that he plans an outreach to the Nigerian population in the U.S.

He acknowledged that the activities of a few unpatriotic Nigerians were impediments to the image of the country and urged foreign investors interested in doing business in Nigeria to always source information through official channels rather taking short cuts that are often fraught with fraud. “Most people who are scammed often ignore official channels and embrace short cuts with sugar-coated deals”, the diplomat noted.

The consul general solicited the cooperation of Center for Media & Peace Initiatives to help in promoting the good image of Nigeria in the United States by show casing the potentials of Nigeria and her peoples.

In his remarks, president of the Center, Nigerian-born Dr. Uchenna Ekwo extolled Nigeria’s progress in the wake of the political change that is taking place in the country exemplified by the historic shift of power from an incumbent president to an opposition party.

“Without doubt”, Dr. Ekwo noted, ” the world welcomed the change in Nigeria”

He therefore called on the country to seize the moment to reduce certain stereotypes of being Nigerian in a foreign land   “Nigeria’s exemplary defeat of Ebola and a successful election in spite of doomsday predictions were recent evidence to demonstrate the country’s resilience”, the public policy expert stated.

Dr. Ekwo promised the support of CMPI to enable the consulate to achieve its goals, calling himself an “unofficial ambassador of Nigeria around the world”.