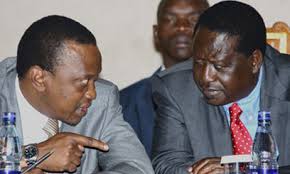 By Uchenna Ekwo
As Kenyans await the outcome of this year’s presidential election, one of the major candidates Raila Odinga has signaled a repeat of the violence that followed the 2007 election if he did not win.
“If I lose, of course it will be because of blackmail and intimidation,” Mr Odinga said in an interview with the Financial Times at his ancestral home in western Kenya and “there would be dire consequences worse than last time”.
“I know that they [my rivals] are putting plans in place to try to rig these elections, but I have warned them the consequences may be worse than last time around. The people will not stomach another rigging.”
Given the danger that any protests against results could turn deadly, as they did last time, his words are sure to raise some alarm.
Moreover, this is exactly the mindset that continues to undermine a flourishing democracy in many African countries. How would anyone in his correct senses and not to talk of a statesman of Odinga’s standing make such utterances considering the huge loss in blood and treasure that Kenya experienced in 2007?
That bloodshed brought the country to the brink of collapse. More than 1,100 people were killed and 660,000 displaced in ethnic clashes – the worst in the country’s 50 years of independence.
To put the present presidential contest in historical perspective, the fathers of the two leading contenders – Raila Odinga and Uhuru Kenyatta were outstanding nationalists who fought for the liberation of Kenya from Britain nearly 50 years ago. Oginga Odinga, father of Raila and Uhuru’s father Jomo Kenyatta who became the first post independence president of Kenya were political allies but parted ways eventually.
Since the two political families helped to bring independence to the East Africa country by working together to uproot British colonial government, destiny and providence demand that the younger offshoots of Kenya’s political dynasties should bring Kenyans together and avoid fratricidal bickering. Uhuru and Raila must sow the seed of a new Kenya just like their parents Jomo and Oginga sacrificed for the freedom enjoyed by Kenya citizens today.
Even with the ethnic divide between the Luo’s and Kikuyu’s, both politicians must rise above ethnic cleavages and look at the larger picture of the prosperity and well being of Kenya, once a model of Africa’s democracy.
A number of world leaders including Kofi Annan had implored all Kenyans to make sure that the election does not degenerate into violence like the one in 2007. Other diplomats and rights campaigners are imploring losers to accept the result this time, or take their grievances to the courts rather than to the streets.
How the outcome of the election is respected will ultimately depend on the two protagonists – Uhuru and Raila. They must see the election as sports: if you lose, you can win the next time.
This is why we see the alarm bell sounded by Raila as troubling. There could only be two outcomes in the election: win or lose. Thinking of dire consequences if he lost raises some concerns about his confidence of victory. It will be more positive to think about what he would do if he won instead of scaring Kenyan citizens into remembering the images of 2007 they would rather forget.
Kenyan citizens must reject any attempt to subject the country to unwarranted violence because of the egos of some selfish politicians. The democratic process must be allowed to take its full course. All complaints can be handled by the judiciary – the constitutional arbiter of electoral disagreements.
Sadly, media reports say Chief Justice Willy Mutunga, whose job it is to swear in the new president and preside over any legal challenges, has complained of death threats and state interference in the run-up to the vote.
As it is, all the democratic structures in Kenyan face unprecedented challenges. But, the country is not alone in this quagmire because even the United States considered the bastion of democracy also has unimaginable threats to the health of her democracy. That said, Kenyans must take solace in the fact that the country belongs to them and they have a choice as to what becomes of the country’s future.
Dr. Uchenna Ekwo is a professor of Public Affairs and Administration, Rutgers University, Newark, New Jersey with research interest in Africa’s political economy.