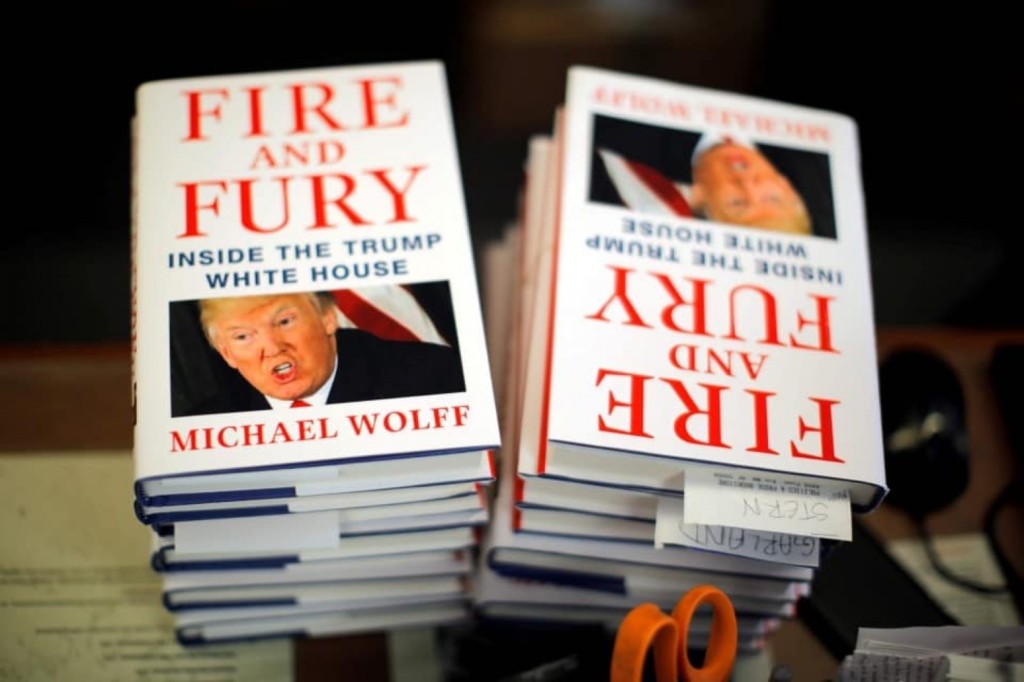 When President Donald Trump threatened in August last year to unleash “fire and fury” against North Korea if it endangered the United States, little did he know that journalist Michael Wolff would use his exact same words as a book title to detonate a literary missile that sent shock waves and panic in the White House? The fallout of the book also distracted the administration from recent gains of the Trump presidency by fueling questions about Trump’s competence as President of the United States.

Fire and Fury: Inside the Trump White House is a glimpse of the inner workings of the first year of the Trump administration. In many hours of interviews, top White House aides told Wolff their unvarnished views of President Trump and confirmed the rumors of the bizarre behavior of America’s chief executive.

In response, the Trump White House, as expected launched an attack on the book calling it a ‘fiction and piece of fantasy’. The author was not spared either. The presidency mounted personal attacks on Michael Wolff and described him as a discredited journalist. Some journalists also pilled on Wolff and alluded to his sloppiness as a reporter in the past. In fact, Trump even gloated in the criticisms of Wolff by the same journalists he had attacked in the past as peddling fake news.

While questioning the credibility of the book and its author is fair game, it should be noted that the White House aides notably the former Trump Chief Strategist, Steve Bannon haven’t denied their quotes in the book. The author was granted access to the White House to conduct interviews with staff and even the President. To that extent, it is disingenuous to dismiss the book as fake news or fiction. Yes, the book could be described as a collection of fact and fiction – faction, but its underlying thesis about the chaos in the Oval Office supports what political leaders in Washington and observers around the world discuss quietly.

The unintended consequence of the full-throttled bashing of the book by the White House was to make it popular and turn the author into an instant celebrity and millionaire. The book topped Amazon’s bestseller while every news outlet in the United States and around the world sought interviews with Author Michael Wolff. In acknowledging the free publicity given to this book, Wolff jokingly asked to “send candy to Mr. President.”

What could have been the best response of the White House to such an explosive book that literally set fire and furry on the administration? Keep quiet? No! The reality is that you don’t put out a fire with fire or pour gasoline on a raging fire. By President Trump injecting himself so strongly in condemning the book, it increased public attention to a book and author that otherwise would have passed as just ordinary. In a hyper-partisan atmosphere amid the unpopularity of Trump among voters, Wolff’s book no doubt provided fodder for the president’s detractors. Perhaps, allowing low-level aides to respond to the book would have been better. As one commentator in Fox News Network pointed out, it is difficult to discredit the author when the same White House granted him access to 200 interviews with Trump and some top officials.

However, it must be pointed out that Michael Wolff flouted journalistic integrity by revealing some information obtained in confidence or as off records. Mixed accounts of the quotes in the book and the sources of those quotes suggest that some of the interviewees provided some information as off the record and yet Wolff printed that information on the book. Certainly, this is not the best way journalists should deal with their sources. Maintaining confidentiality of sources is among the basic knowledge in journalism practice because to do otherwise, will close the doors to obtaining valuable information for news or information consumers.

As guilty as Wolff might be in terms of violating journalist-source privilege, let us not forget that it is one of those ethical quandaries journalists face on a regular basis. Does the public interest override shielding information from a source? What’s the prospect of other journalists obtaining confidential information if the source is not sure about disclosing their identity? For example, the former deputy White House chief of staff, Katie Walsh quoted as saying that working with Trump is “like trying to figure out what a child wants” in the book “Fire and Fury: Inside the Trump White House” faces an uncertain future in her new job at a pro-Trump political group and the Republican National Committee following news reports that senior Trump advisers are debating whether to press for her ouster. Already, Steve Bannon has lost his job as Chief Executive of right-leaning Breitbart news organization after his political and financial backers abandoned him.

On the other hand, fellow journalists who are critical of Wolff may be engaged in what can be called professional jealousy. Some media pundits made references to Wolff’s history of journalistic inaccuracies. Some dismiss him simply as a tabloid journalist. The insults and invectives hurled at the author of Fire and Fury: Inside Trumps White House may be as a result of envy because he put together what many journalists whistle about Trump for so long in a book that became an instant success. The attention given to the book and its author is the desire of every journalist.

No doubt, Wolff’ detailed account of the 45th president’s election and first year in office based on extensive access to the White House and more than 200 interviews with Trump and senior staff will inject serious cash into his pocket while pleasing nearly 60 percent of Americans who disapprove of Trump’s job performance.

“Ignorance is a choice”