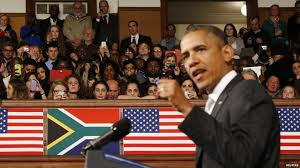 By Uchenna Ekwo
In a speech at the University of Cape Town, South Africa, during a recent visit to Senegal, South Africa, and Tanzania President Obama reminded the world about the paternalistic relationship between Sub-Saharan Africa and the rest of the world. Obama’s speech at the University of Cape Town was similar to the familiar Sermon on the Mount that Africans hear when they host foreign leaders especially the United States. Clinton, Bush and others before them engaged in similar rhetoric.

What, if any, is different this time? Power Africa! Obama chanted as he spoke about new initiatives to provide electric power to African countries. United States, he said, would invest $7 billion in addition to $9billion private sector investment towards the provision of electricity in cities and towns in Africa. The administration’s vision for US-Africa relations puts a premium on economic opportunity, democracy and African-led approaches to development.
President Obama says that America’s relationship with Africa is moving beyond the simple provision of assistance and foreign aid, to a new model of partnership between America and Africa — a partnership of equals that focuses on opportunity, democracy, and peace. He announced that a summit of African Head of States would take place in the US next year to launch a new US/Africa Partnership. Very juicy details and newsworthy comments that made headlines! The challenge is moving from rhetoric to reality.

All too often, world leaders including of course African leaders make pronouncements before television cameras only to be forgotten as soon as the media spotlight is off. Obama’s visit to three African countries may as well become history with all the promises ignored and put in shelves of academic institutions and policy think-tanks.
The summary of all Obama’s policy prescription to improve the condition in Africa is that countries in the continent need help from both industrial powers and themselves as well.

It is in this connection that I thought about suggestions by some development experts who have long called for an equivalent of Marshall Plan to rescue African countries from the brink of socio-economic morass. Let’s consider the state of Europe that gave birth to the Marshall Plan to identify some similarities.

About the middle of the 20th century, United States embarked on a program designed to rehabilitate the economies of 17 western and southern European countries after the Second World War. Similar to the state of Africa today, poverty, unemployment, and ravages of war festered in Europe at the time and there was apprehension on the part of the United States that Soviet Union might exploit the ugly situation to lure Europe to embrace communism—a parallel situation with China’s burgeoning influence in Africa today.

Faced with the prospect of losing Europe to the trappings of Soviet Communism, the then United States Secretary of State under President Truman, a Democrat, General George C. Marshall in his 5th of June 1947 speech at Harvard University outlined a radical proposal to transform Europe to create an enabling environment for democracy to flourish.

“Clearly, this is a wrong approach. While it is good public relations and grandstanding for the administration, it is not going to be productive. The correct and more useful forum to launch US-Africa Partnership that will endure is in the US Congress”

In what later became famously known as the Marshall Plan, the then Secretary of State announced the European Recovery Program that was subsequently approved by the US Congress. The recovery program lasted from April 1948–December 1951. Under the Marshall Plan, the United Sates embarked on the rehabilitation of the economies of war-ravaged European countries of Austria, Belgium, Denmark, France, Greece, Iceland, Ireland, Italy, Luxembourg, the Netherlands, Norway, Portugal, Sweden, Switzerland, Turkey, the United Kingdom, and western Germany. The rescue package amounted to $20 billion (an equivalent of today’s more than $120,000 billion).

While participation in the Marshall Plan was voluntary, it was based on European self-help program and an aggressive financial intervention by the United States. Considering that the Marshall Plan was widely hailed as a success, are there some similarities with Obama’s pronouncements in his recent trip to three African countries?
At every step during his trip, Obama emphasized the need for African leaders and citizens to take their destiny into their own hands and seize the moment, and avail themselves of opportunity provided by the proposed US-Africa partnership. When two parties enter into partnerships, there are some rights, duties, and obligations expected of each partner. The aforementioned Marshall Plan struck the same tone of partnership in which European countries that participated were expected to meet some conditions to match US financial infusion.

The Obama version of Marshall Plan is however different on a wide range of issues. He proposed that he intends to launch the new US-Africa partnership in Washington and plans to invite all Heads of States of African countries for that purpose. Clearly, this is a wrong approach. While it is good public relations and grandstanding for the administration, it is not going to be productive. The correct and more useful forum to launch US-Africa Partnership that will endure is in the US Congress. After all, Congress approved the Marshall Plan and Obama did not mention any effort to bring his plan for the rescue of Africa to the halls of Congress where the control of US financial power actually lies.


If Obama is inviting African leaders to a jamboree just because Chinese leaders do the same, it would not work given the differences between decision making processes in United States and China. US democratic governance activity like most genuine democracies can be messy unlike the Communist regime in Beijing that can make unilateral decisions very easily with less convoluted public policy process. For example, former Chinese President Hu Jintao held several meetings with African leaders under the aegis of the Forum on China-Africa Cooperation. His successor, President Xi Jinping continues on that path and it is yielding fruits considering the depth of China’s involvement in many African countries today.

Perhaps, China’s unilateral partnership with African countries may have jolted the United States to action. Obama, the first US president with an African father, in a bid to contrast with China-Africa partnership noted that the new partnership between Africa and US will be based on equal partnership. I think such a comment is non sequitur and wishful thinking. If the partnership is to be based on equality, why did he propose a pilgrimage of African leaders to pay homage to their ‘master’ – US in Washington to launch the partnership? Are there no neutral grounds such as Portugal where Portuguese sailors initiated the first contact with Africa that started the slave trade that is partly responsible for the continent’s woes? The credibility of the proposed partnership should be matched with similar cooperation agreements between US and other regions of the world such as Israeli/US, China/US, and Middle East/US partnerships etc.

Admitted that African countries do not have strong lobby or advocacy groups in the US Congress, it is understandable why issues about Africa is treated with lip service within the US policy framework. Perhaps, Obama should become a one-man lobby for Africa to push through his initiatives especially the proposal on electric power generation in the continent. In addition, Africans especially those in Diaspora must bring pressure to bear on businesses notably oil companies operating in Africa to influence US lawmakers to embrace a rising Africa.

Another important point to make is that African countries should have the liberty to consider getting on board to Obama’s proposed partnership. The mistake that almost every world leader makes is to consider Africa as one entity, monolithic, and applies one-size-fits-all prescription. There are 54 countries in Africa with different history and peculiar circumstances. A lot of informed and uninformed elite still refers to Africa as a country and not a continent. Ignorance about Africa is even reflected in the recent Obama’s visit to three African countries that made headlines as Obama’s visit to Africa. But when he visited China or England, the trip was not described as Asian tour or European trip. The point being made here is that the Obama administration should understand that not all countries in Africa might be interested in its offer of partnership. However, the administration should set some benchmarks for accepting the offer of partnership and that is one way the countries that choose to participate can take the partnership seriously. In the Marshall Plan, not all European countries participated and the success of the plan reflected on the progress made by those who benefited from it.

Although it is difficult to replicate the Marshall Plan today because of the bleeding financial health of the United States, the distrust of some kleptomaniac African leaders, a changed multi-polar world, the Obama administration can fine tune its approach to Africa to reflect changed circumstances. Extending a handshake to African countries instead of a handout will guarantee a partnership truly hatched and harnessed by friends that share equal status.