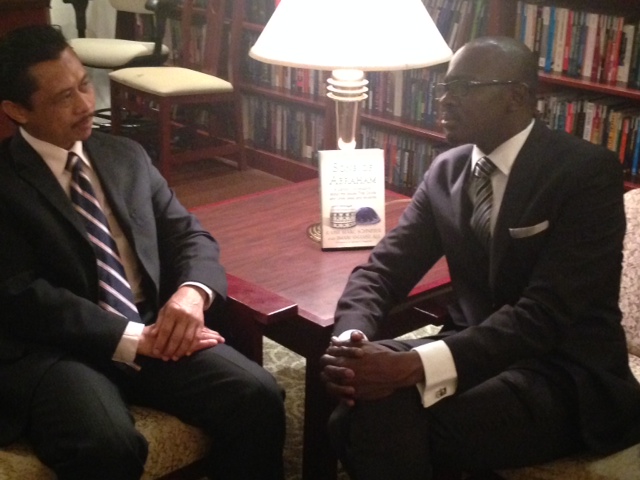 Imam Shamsi Ali (L) and Husseini Y. BabalWaiz of CMPImedia(R) during the interview

In revisiting the controversy that surrounded the media coverage of the proposed mosque near the World Trade Center, Imam Ali regretted that the media portrayal of the planned mosque reinforced existing prejudice against Islam in the United States after the attack of 9/11.

Imam Ali who is also the President of Nunsantara Foundation, a New York-based nonprofit expressed the view during an exclusive interview with CMPImedia correspondent in New York.

To further underscore media’s penchant for stoking conflicts, Imam Ali recalled several incidents where the media would ignore positive and genuine signs of reconciliation but hype the dramatic incidents of disagreements among different religious faiths.

However, Imam remains optimistic that some political and religious leaders recognize that there are more things that bind humanity together than divide. He cited the great leadership demonstrated by former New York Mayor, Michael Bloomberg during the controversy over the proposed building of a mosque near Ground Zero.

Ali recounted his encounter with the former Mayor during the period. According to the Imam, Bloomberg said he supported building the mosque not because of any special love of Muslims but because of his respect for the US Constitution that guaranteed freedom of worship.

Imam Shamsi, who Is also the Imam and director of the Jamaican Muslim Center, Queens in New York admitted that Muslim leaders should be more forceful in communicating the message of Islam arguing that poor communication had fueled public misunderstanding of Islamic precepts around the world.

He rejected the notion that Islam was synonymous with terrorism, radicalism, and undemocratic principles. It is therefore, the challenge of modern Muslim scholars and practitioners to change the ugly perception of Islam perpetrated by few bad eggs in the faith, Imam Ali stated.

The very first step, Ali said, was to focus on the future in a way that Muslim leaders could embark on the education of Muslim youths on the Islamic teachings of forgiveness, tolerance, and tranquility towards members of other faiths.

Imam Shamsi, a UN Chaplain and a strong advocate for Interfaith dialogue, co-authored a book with  a Jewish Rabbi entitled,  “Sons of Abraham”, —a classical work in ecumenism and with a foreword written by President Bill Clinton.

Africa’s ICC Dilemma: A choice of sovereignty or surrender