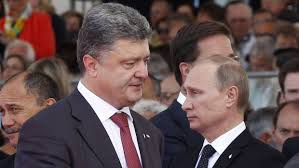 Petro Poroshenko might have emerged from Ukraine’s presidential election that attracted legitimacy and continued grace for the symbol of authority in Kiev but the challenges ahead are immense as exemplified by the mystery surrounding the shooting down of the Malaysian airliner in the country’s airspace with nearly 300 passengers on board.  Petro’s centrist approach of bridging the differences between Russia and the West obviously sustained his victory as he seems to satisfy minimum requirements of internal and external gladiators. The implication is that Ukraine will not pursue NATO membership so as not to anger Russia instead Ukraine will seek to tap the economic opportunities in European Union which have been the demands of the protesters in Kiev.

But the incoming democracy and the political bridge in Petro appeared not enough to calm the nerves in Eastern Ukraine. In contrast, the counter-revolution in the East led by thugs has graduated into civil unrest and Petro’s support for serious military confrontation might produce a protracted war, with long term implication tilting towards guerrilla warfare.  Russia repeatedly denied and withdrew many of her soldiers along the border so as to de-escalate the tension but at the same time maintained remote and calculated links with the Separatists in the East. In addition, Russia believes in brute force and gang star resistance approach and will continue to relate underground with the separatists.

Therefore, what is required of Petro- led authority in Kiev is a superior weapon, one that wins the souls of men and women and people of good conscience.  Non-violent philosophy worked for Gandhi in India, It worked for Martin Luther King Jr in America, a mixture of it worked for Nelson Mandela in South Africa and such can still work for people of Ukraine as it goes with great potency that appeals to the heart. Therefore, to brighten the future of Ukraine, Petro is faced with hard choices, between military confrontation and non-violent approach and any little mistake will take the country back to Dark Age.

If Petro should decide for serious military confrontation, not only will his government loose the mediating powers, but it goes with great consequences as the remains of the Ukraine economy will be damaged. Moreover, this is a war that the West might not be fully committed as the pains of recessions are not yet over. Importantly, the recent European parliamentary election and the rise of anti-EU parties in many countries have contradicted any war proposal at this material time. Should he choose non violent approach, which blends with forces of democracy, he must initiate confidence building measures between Kiev authority and locals of Eastern Ukraine and such reflected in Russia’s vision for Ukraine as she called for political dialogue to quench the fire.   In diplomacy, sometimes, you forget the messenger and opt for the message. Petro needs to parley with the eastern locals.

As Russia is de-escalating, the separatists will also do the same because history tells us that insurgency de-escalates as reasons prevail. Also, Russia has many arsenals to cage Ukraine from gas politics to internal insurgency.  Ukraine will continue to pull attention because of resources attached to the market-size. It requires enabling environment, as the only way of reducing Russia dominance is by offering a sound economic model that guarantees prosperity and future of all Ukrainians.  Finally, such demands sound diplomacy and the necessary skills to walk on a slippery rope. Petro already is on a slippery rope and should ask Tony Blair how he ensured sustainable peace in Northern Ireland.

Petro Poroschenko can only be the bridge he aspires to be when his language and policies reflect a mixture of East and West or at best an aggregate, raising the stake of the easterners in national decision making and interpreting the over-riding global political economy with sense of balance and putting into consideration the internal division that needs to heal and the urgency of reviving the moribund economy.

Robert Madu is a researcher on Ukraine and a freelance journalist. He presented a paper on Ukraine crisis in an international conference at the University of Helsinki, Finland on 9th May 2014. email: robertmadu5@yahoo.com

Anatomy of state of journalism today