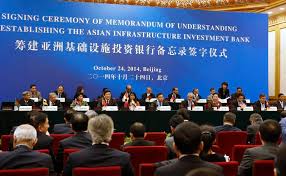 Helga Zepp-LaRouche, leader of the LaRouche Pac, a nonprofit organization in the US has welcomed the New Silk Road project of Asia Infrastructure Investment Bank (AIIB), the China-led multilateral bank. At a recent EIR diplomatic and business meeting in New York to promote the new publication“The New Silk Road Becomes The World Land-Bridge”, Ms. Zepp-LaRouche stressed the importance of infrastructure development in undeveloped regions of the world.

She noted the commitment of AIIB and BRICS countries of Brazil, Russia, India, China, and South Africa towards the eradication of poverty in a short period of time and especially in Asia, where about 700 million people are living below the poverty level. She also said that China wants to make a same economic miracle in that vast desert region just like what it did during last decade.

She compared the efforts to solve the water shortage crisis of US and BRICS countries. For example, while US still grappled with water shortage crisis, China built the Three Gorges dam, and conducted the South North Water Transfer Diversion Program. Also, she mentioned India’s water converting project, which convert 101 rivers into transport channels, which can produce energy three times more than the electricity needed for New York City.

Based on these examples, she emphasized the necessity of US’s cooperation with AIIB. “This New Silk Road Policy and AIIB’s efforts will lead to the mutual benefit of all participating countries,” “Not only to deal with the water shortage and poverty problem, but also to avoid future wars around the world, people should convince US to cooperate with AIIB and New Silk Road Policy,” she said.

And last May, AIIB (Asian Infrastructure Investment Bank) announced that it is expected to be operational by the end of this year. Each founding member-nations had a meeting for the details of the agreement this week. Since Xi Jinping announced the new multilateral bank in 2013, it has been considered as a new threat to US-dominated World Bank and Japan-led Asian Development Bank.

Contrary to expectation, 57 countries from Asia to Europe decided to participate in the new institution and $100 billion capitalization is expected, even though US and Japan didn’t join it. US allies, such as UK, Germany, France and South Korea also joined AIIB but US, Japan and Canada are still staying away from it.

It is quite clear that Japan and US consider this new institution as a rival. Japan announced that it is planning to provide $100 billion for the Asian region infrastructure. Japan said that it is aiming “high quality” infrastructure development such as reducing pollution, rather than non-environmental development like railroad and highway. This statement is considered to imply China’s New Silk Road plan, which is focusing on connecting the vast region from Far East Asia to Eastern Europe.

US and Japan is dominating world’s major multilateral banks. US has 17.7 percent stake in IMF, 16.8 percent in WB. Japan has 15.7 percent in ADB. Most multilateral banks decision making was made by 85 percent approval of the member-nations. So US and Japan actually has the veto power. But in AIIB, It is expected that China will have about 30 percent stake and India, 10 percent. If AIIB starts operation, it will change this world financial order led by US-Japan.

US and Japan keep standing back from AIIB, citing concerns about AIIB’s transparency and China-centric governance. They are concerning that this new challenger, improving tremendously and rapidly, would change the current financial order. But this expectation is quite different from reality. China’s steps during organizing AIIB are breaking US’s prejudices continuously.

First, China’s stake in AIIB will be around 25 percent, delegates who participated in the meeting of AIIB founding nations said. Its share ratio was originally expected to be more than 40 percent at first. At the same time, China announced that it would not pursue its veto power. Giving up its veto power was the key to win European countries’ participation.

Besides these facts, some leaders are admitting the integrity of AIIB’s aim. The main business project which AIIB is planning is the ‘New Silk Road’ project (which is also called as “one belt, one road policy”).  This is the project to develop the Eurasian Land-Bridge from China, Central Asia, Russia, to Europe and another corridor from Central Asia, West Asia, Gulf, to Mediterranean. About 3 billion people of 60 countries are living in this vast region.

While Japan is considering joining with AIIB, US is still standing back from it. Some analysts say that rather than preventing their allies to stay away from AIIB, it might be more efficient for US to let their allies participate in the new bank so that US can have much bigger voice.

There are still unstable factors about AIIB. AIIB said it would be operational by the end of this year. But some experts expect that the operation of AIIB will be next year. Since each member-nations have to take the agreement to their government and get the approval. China wants them to submit the approval by the end of this year but it would be hard because of the political situation of each countries.

There are also some voices concerning about steps towards organizing AIIB.  Jahangir Aziz, head of emerging market Asia economics at JPMorgan, said it was unclear how AIIB would be structured and operational. “We have to wait until the new bank’s structure and governance become stable and successful,” he said.

Although there are some unstable factors, it seems clear that AIIB is aiming the cause which ADB and WB have never considered. This New Silk Road project sounds somewhat unrealistic, but at least it gives a silver lining to undeveloped countries. About half of the population on earth can be benefitted by this project, if it is successful. Rather than concentrating the ‘power game’, US and Japan should consider what the more productive way would be.

Hyewon Lee is a staff writer for CMPI