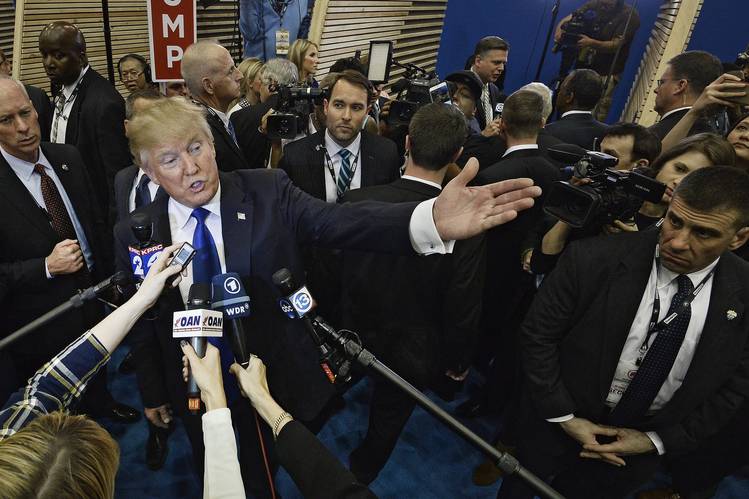 When President Barack Obama told his audience in Ghana during his first visit to Africa as president in 2009 that the continent needed “strong institutions and not strong men” – a veiled reference to the pervasive dictatorship in Africa – little did he know that 7 years later, he would face the prospect of handing over the presidency to a potentially crass bigot and despot. At the last presidential debate, Republican candidate, Donald Trump threatened to jail his opponent, Hillary Clinton, the Democratic nominee if he won the November 8th polls. Jailing political opponents is not a common practice in the United States but it is frequent in emerging democracies and authoritarian regimes. If such threats were made by Robert Mugabe of Zimbabwe, Yoweri Museveni of Uganda, Paul Biya of Cameroon, North Korea’s strongman, Kim Jong-un or other leaders that play by different set of rules, United States will intervene, pontificate, and sermonize.

Although several opinion polls by major news organizations and polling agencies suggest that Donald Trump is unlikely to be elected America’s president next month, his candidacy has revealed the contradiction inherent in dictatorship and leadership.  United States is a country with checkered history of democracy anchored on the rule of law, freedom of expression, and respect for human dignity. Yet, the Republican Party – a party of Abraham Lincoln credited with the abolition of slave trade in the United States nominated Donald Trump, a candidate with a cult following whose every action seems undemocratic. He says he wants to abolish the 14th amendment of the constitution that gives birthright citizenship to anyone born in the US regardless of the nationality of the child’s parents. He also wants to suppress media freedom by invoking long abandoned libel laws that in many instances run afoul of the first amendment to the constitution.  He has proposed what many have called a religious test for people who enter into the United States – an infringement of the constitution that guarantees freedom of religion. He questioned the administration of justice by insisting that an Indiana-born judge with a Mexican descent could not be impartial in a Trump University case pending before the Federal judge, Gonzalo Curiel. The latest string of his undemocratic and unconstitutional outbursts is a revelation that will jail his political opponent, Hillary Clinton because the FBI failed to indict her for the use of private email server when she was the Secretary of State. After an exhaustive review, the FBI and Department of Justice concluded there were not sufficient grounds to indict the former US top diplomat. Apparently unsatisfied with that verdict, Trump told nearly 70 million viewers of the second presidential debate that he would resurrect the case if he became president. It did not end there. He declared that he would appoint a special prosecutor who would ultimately put Hillary behind bars. This is the height of disrespect for due process and rule of law. One person arrogates to himself the power to predetermine the outcome of a case.

Besides undermining the judicial process, Trump also casts aspersion on the integrity of the electoral process. He has begun to sow doubts in the country’s electoral system. He continued to claim that if he didn’t win the presidency, it must have been as a result of a rigged system bent on denying him entrance into the Oval Office. For a very longtime, America’s faith in the electoral system remained unquestionable until the Bush-Gore electoral dispute in 2000 that was settled by the Supreme Court. That court’s verdict left a bitter taste in the mouths of many Americans who believed the Democratic Party candidate in that year’s election, Al Gore, with majority votes, was denied the election via what some analysts called judicial coup d’état. Sixteen years later, Trump backed by strident supporters is sounding an alarm for an unfounded plot to manipulate the election in favor of his opponent. As ludicrous and ridiculous as his claim might be, it fits a pattern of gloom and doom painted by Trump of the United States throughout his presidential campaign. Unknown to the businessman turned politician, his action diminishes the status of the United States by lowering the reputation of a country he plans to lead to the same level with other emerging countries that still grapple with electoral credibility.

Trump’s unsubstantiated claim about plans to rig the US election ignores confirmed evidence about Russian government’s plot to interfere with the 2016 presidential election through incessant hacking of emails of Democratic National Committee and John Podesta – the Chairman of Hillary Clinton Presidential Campaign. The Republican Party’s nominee’s silence on the alleged Russian interference only fuels the speculation about his ties with the Kremlin. So far, he has continued to praise Vladimir Putin of Russia as a stronger leader than Obama and his fascination for North Korea’s leader, Kim Jong-un is palpable. Why is he attracted to dictators? While Psychologists may be in a better position to provide a more accurate explanation, it is possible that his natural inclination is to personalize power, grab power by force, and treat people with contempt. Democracy is about pluralism, due process, and respect for human rights, all values that United States have propagated and defended around the world. The prospect of a Trump presidency might change all that but what that scenario means for the entire world is better imagined than experienced.

The recent tape uncovered by Washington Post, the so called “Access Hollywood Tape” clearly showed the dictatorial impulses of a candidate who might become a US president in the next three weeks. When he brags that he could grab women’s genitals and do anything with women and get away with it because he is a ‘star’, it means that he can invade the privacy of women as he pleases; whether the women wanted it or not. If that demeanor is a guide of what a President Trump would do in the Oval Office, then women- half of the American electorate- will be in trouble because no star is as famous or powerful as the President of the United States.

For sure, American voters would have rejected Bill Clinton prior to winning the White House if they knew the Monica Lewinsky episode would occur 6 years into his presidency. With Trump’s misogynistic and misanthropic behavior well documented and publicized before the November polls, the American voter couldn’t be more informed. In the event of an eventual triumph of Trump in the elections, American voters would have validated sexual crimes and expressed a desire to glorify intolerance, bigotry, racism, sexism, tax evasion, abuse of power, and intellectual, moral, and financial bankruptcy reflected in Trump’s rhetoric. The world hopes that era would never come. It will remain a mirage.

This article was published in October 18,2016 by themiragenews.net