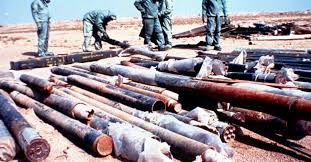 Part II of the series further explores the secrecy behind chemical weapon discoveries and acquisitions in Iraq and the effects of this secrecy on soldiers and civilians. Whereas Part I dealt primarily with Operation Avarice — a CIA initiative to purchase and destroy chemical weapons in Iraq — and it’s concealment from the public, Part II examines more broadly the lack of coordination concerning chemical weapons among intelligence, government and military, the consequences of internal secrecy and potential routes to reconciling conflicting interests in future demilitarization processes.

In the first nine months of 2006, the American military recovered about 700 chemical warheads and shells. Later that year, the military discovered 2,400 rockets at the site of Camp Taji, a former Republican Guard compound East of Baghdad.

But the Senate Select Committee on Intelligence was kept in the dark.

The Army hesitated to document the presence of chemical weapons or give an accurate picture of the weapons’ scope. Reporting chemical warheads ran contrary to a swift mission of demilitarization: If soldiers waited for chemical specialists before detonating explosives, they would delay the removal process — and endanger more lives.

“In the difficult calculus of war, competing missions had created tensions. If documenting chemical weapons delayed the destruction of explosive weapons that were killing people each week, or left troops vulnerable while waiting for chemical warfare specialists to arrive, then reporting chemical weapons endangered lives,” said a New York Times report published in October on chemical weapons in Iraq.

As a result, military officers were ordered to report chemical weapon finds as, “Nothing of significance,” the report said.

According to the United Nations Convention on the Prohibition of the Development, Production, Stockpiling and Use of Chemical Weapons and on Their Destruction, which the U.S. ratified in 1997, “[a State Party] shall destroy chemical weapons only at specifically designated and appropriately designed and equipped facilities,” and must report the quantity of chemical materials destroyed in annual reports. Rapid detonation of warheads containing unknown quantities of chemicals by soldiers untrained in chemical removal violates this convention. Further, the United States waited until 2009 to share its recovery of more than 4,500 chemical weapons with the Organization for the Prohibition of Chemical Weapons, and even then, the data were concealed from the public.

Gaps in Intelligence Within the Military Itself

The military went into the war with a limited understanding of Iraq’s chemical weapon threat, and information about the weapons was not shared among military personnel as the U.S. began to discover and purchase warheads. Iraq gave inconsistent numbers to the United Nations in the 1990s concerning how many warheads it had manufactured or how many had been fired during the Iran-Iraq war. Because the United States did not have a clear picture of how many weapons remained, no target for recapture via Operation Avarice or other means could be established.

“We remain confident,” Charles Duelfer, adviser to the director of central intelligence and a former UN inspection official, said in a report, “that we have not destroyed chemical weapons in the process of destroying Iraqi weapons.”

But this confidence was misplaced. Explosive ordnance disposal technicians now say chemical weapons were detonated alongside non-chemical ones. These blunders were covered up – even from military officers and doctors.

Throughout the U.S. invasion, military personnel found warheads with increasing levels of sarin purity. While the levels had initially peaked at four percent, a 2005 purchase under Operation Avarice showed purity of 13 percent. This difference was significant because a Borak rocket placed in an improvised bomb with this potency could then effectively disperse the sarin nerve agent. In 2006, internal records indicate sarin purity levels found up to 25 percent, so weapons bought under Avarice might have in fact posed a threat. The Times reported exposure of military personnel to sarin of 43 percent purity.

Ignoring the chemical threat had significant advantages when it came to quickly disposing of explosives. But military’s philosophy of turning the other cheek had two grave consequences: Soldiers suffered continued medical negligence and were denied honors and insufficient efforts to destroy all weapons found led to the capture of some by the Islamic State.

The military downplayed the danger of chemical weapons to troops and medical doctors, and this system failed those in harm’s way at multiple stages.

As medical professionals were unaware of the existence of chemical weapons, they were skeptical of chemical burns and ill prepared to treat them. After military doctors identified repeated cases of mustard burns on soldiers and recommended continued evaluation, soldiers were sent back to duty without proper medical follow-up and denied Purple Hearts that would officially recognize their wounds. One army sergeant with mustard burns was reportedly denied hospital treatment and medical evacuation to the United States despite requests from his commander.

Last November, Defense Secretary Chuck Hagel agreed to revisit cases of chemical exposure, and the Pentagon conducted an internal review, revealing more than 600 American service members reported chemical exposure in Iraq since 2003. Veterans exposed continue to suffer side effects. Operation Avarice might have helped reduce the incidents of exposure by identifying toxic warheads and destroying them through proper procedure.

U.S. not concerned with degraded weapons? The Islamic State might be the market for some.

Despite two wars and an international demilitarization effort, the center of Iraqi chemical agent production in the 1980s, Muthanna State Establishment, was never fully cleaned of sarin-filled rockets, mustard and sodium cyanide, a precursor for the warfare agent tabun. The U.S. turned the guarding of Muthanna over to Iraqi forces, and last June, the Islamic State took control of the facility.

In one bunker, 2,500 sarin-filled chemical rockets and 180 tonnes of sodium cyanide (treated with decontamination solution but still hazardous) remained. In another were left 2,000 mustard-contaminated 155mm artillery shells and contaminated mustard containers and construction materials, the Guardian reported. All are toxic, but only the sarin munitions could be revamped into weapons.

The UN said the sarin was of poor and degraded quality, and US state department spokeswoman Jen Psaki said the weapons would be difficult to use, as they had been dismantled by UN inspectors in the 1990s. The lack of concern sounds eerily familiar. The U.S. has downplayed the danger of chemical weapons in Iraq over the last decade and underestimated the concentration of sarin. One can only hope confidence the weapons cannot be used is justified.

American ambivalence to the weapons seems inconsistent with the efforts of Operation Avarice. If the U.S. was not overly concerned about degraded rockets falling into the hands of the Islamic State in 2014, why would it pay to remove similar weapons from the market in 2005? Was Operation Avarice simply a cleaning initiative aimed at reducing toxic materials for Iraqis? Unlikely.

The Islamic State attacked a Syrian city with chemical shells in 2014, and dismantling his own chemical weapons production facilities, Syrian President Bashar Assad is leveraging the Islamic State’s use of the weapons to urge the international community to work with his regime in its campaign against the Islamic State.

Secrecy is often necessary in matters of national security, especially to protect the officers and assets involved. Too little is known about Operation Avarice to judge if the CIA made the right decision to keep the program secret. But the consequences of refusing to widely acknowledge the presence of chemical weapons in Iraq cannot be ignored. At the very least, the military needed stronger coordination among soldiers, officers and military doctors to ensure the health and safety of combatants.

Perhaps the military, Congress, and the international community could establish a reasonable protocol for testing explosives for chemicals or detonating them on site without always calling in specialists. The military might also have provided additional training in identifying potentially hazardous weapons to squads.

If militaries experience tactical pressure to ignore chemical weapons, additional policy should explore pathways to facilitate weapon removal – allowing for quick destruction of non-toxic weapons and the flagging of potentially hazardous materials for specialists. Re-examining the UN Convention in an operational setting, and strengthening coordination and transparency among the U.S. military, government, and public, could ensure the mistakes of Iraq are not repeated.