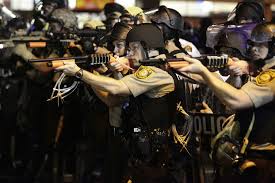 It is high time we started looking and asking for ways to prevent such incidents from happening again. However, if you are a parent of a young black man or black teenage son in USA…you must have, by now, armed him with the knowledge that life is not fair, that he is playing a game against a stacked deck and he must go out of his way to avoid and diffuse situations like what happened in Ferguson. Yes, having rights is not worth much if you were laying in a jail cell, hospital bed or in a grave. This is a reality to which you must accept; failure to do so could be more than dangerous to your health, period. The discussion I had with my son when he started driving on how to deal with the police force is this…do not talk back, remain calm (even if you feel you’re right) answer yes sir, no sir and COOPERATE fully and if you can grin….smile. Let’s face it. They don’t have batons like in Britain or other British colonies. They have the guns and the bad cops aren’t shy about using them. Indeed, every parent, black or white, should give the same advice to their teenage child.

We all know that prevention is always better than cure. The Los Angeles Assistant Police Chief, Earl Paysinger , articulated it well in this one statement “We’ve learned that community outreach can’t wait for the day when you’re in trouble and need help”. I say, Amen. The Missouri police departments should learn one or two things from police departments in Central Wisconsin; who usually put an event called “coffee with a cop”. A way for officers to meet the citizens to talk about concerns and issues and meet the officers that serve and protect them. They could learn a lot from Central Wisconsin in good decision making. The good cops out there, you better start sitting on the bad ones. I have never been comfortable simply blaming everything on racism…what of “anger” or “adrenaline”, “fear”, “hot temper”, “bad personal mannerism” or “poor training” ? Wilson has no business being in the police force to begin with. He is the type that brings bad name to a lot of very competent, calm and good police officers that keep all of us safe. Ferguson blew up because so many people have been harassed that they automatically assume this fits that pattern of subtle racism.

Another important step to mitigate this constant problem is for the police force to reflect the composition of the population they serve. African Americans make up 67 percent of the population of Ferguson, Missouri…but there are just three black officers on the 53-member police force. To make matters worse, some of the officers don’t even live in Ferguson. Something is wrong here. There are definitely college graduates from Ferguson city or high school graduates who can be recruited to go to police training school. This constant knee jerk reaction to police shootings can be reduced by tackling the root cause. It is just like having a leaky faucet in your kitchen and a broken pipe gushing water in your basement. When the plumber arrives would you tell him to fix your leaky faucet first and ignore the pipe in the basement until the faucet is fixed? Way to prioritize!!

I hope the truth comes out and when it does, one thing for sure is Michael Brown will still be dead; and one side or the other will not be happy. My heart and prayers still goes out to Michael brown’s family. That shooting was terribly, horribly wrong. Putting six bullets in an unarmed civilian is virtually always going to be wrong. It doesn’t matter that the civilian was big or may have been unruly. Why six bullets? Up here in northern USA, we don’t even kill a Deer with six bullets.

It doesn’t matter whether Officer Wilson is a cold blooded murderer motivated by racism. From a professional point of view it should be over for Wilson. From a criminal point of view, he deserves a fair trial. Wilson already has a website set up for him where the donations pour in like a river of hate and bigotry and he is hoisted up like some sort of folk hero. Those sites were filled with the most tiresome, stereotyped and sickening cliches of insane racism. Wilson didn’t write those comments and didn’t ask for those comments. But associating Wilson’s case with that kind of filth only hurt him, and hurt him badly. How shameful and macabre is it that a person that snuffs out a young man’s life gets a website like that for donations. Gunning down unarmed children isn’t a “cause”, it is a crime.

Yes, there are bigots who will latch on to the cause, just as there were hooligans who latched on to the demonstrations. The hooligans no more diminish the notion that the shooting should be properly investigated than the bigots diminish the notion that the officer is not presumed guilty. The demonstrations are diverse in race, showing it is humanity crying for its own. Color should not be allowed to separate all of us from our humanity.

Sadly, we can’t hear Brown’s side of the story and many aren’t all that concerned with it to begin with. Michael Brown should have been arrested to stand trial for any crimes he committed, not shot in cold blood. Even if a scuffle ensued and that Mike Brown challenged Darren Wilson’s authority and for that he died? I’d rather have a black eye than blood on my hands but maybe I read too much of the red words from the New Testament. Some people would shoot a guy in the back for running off with their TV. I’d rather buy a new TV than kill a human being for few hundred dollars of soon-to-be-obsolete property. However, some people are sinfully too prideful. Wilson is deemed innocent until proven guilty but not Michael, really? This is one of the reasons that all cops’ cars should be equipped with a camera that are recording at all times immediately a suspect is stopped. We have the technology and it’s cheap. What’s the problem here!!

I often tell my children that while I know that things are not fair or equal, we still have to decide how we are going to deal with that reality today. The clock on life is ticking. If you wait for life to be fair you may be waiting until life is over. A black teenager has to be absolutely flawless and perfect, I told them, in order to glean any resemblance of value to his life. You just have to make the best choice you can under the circumstances to counteract the effects of these injustices on your life right now. I have learned how to navigate through this world (Africa, Europe and USA) and thrive, while fully embracing who and what I am. I will pass the tools of resilience to my children, that’s the best I can do. Again they should be fearless and gentle. Fearless through faith…per fidem intrepidus,…gentle and wise.

The War in Nigeria