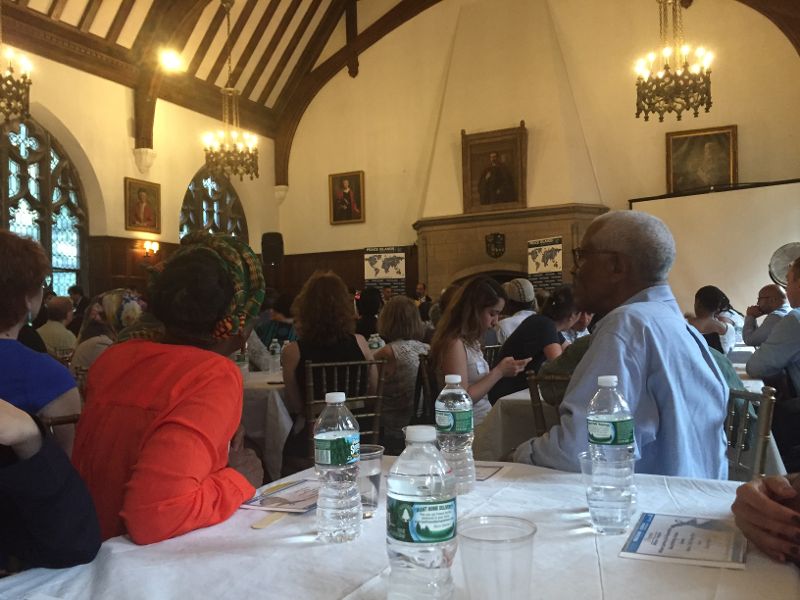 There was a quiet sense of unity in the air. The room was decorated with signs of Caucasian, Christian America, such as images men in graduation robes. However, the room was full of burqas and headscarves, images the American media might associate with hatred and violence. But, these people were not gathered together with the goal of violence, rather the goal was peace. The Interfaith Ramadan Iftar dinner, held at Union Theological Seminary in New York, consisted of live music, whirling dervishes, Turkish food, and speakers about Ramadan, interfaith, and the theme of the night – “food justice.”

One of the first performances at the dinner was live music and Whirling dervishes, an inspiring cultural experience that educated the audience about a historic Sufi tradition. The term dervish means a member of a Muslim (specifically Sufi) religious order who has taken vows of poverty and austerity.

The Iftar dinner featured traditional Sufi music, with men on instruments such as the Tanpura. Alongside the musicians was a whirling dervish. Whirling dervishes are part of a Turkish Sufi tradition. Spinning in circles from right to left continuously, the dervish men wear white gowns, symbolizing death shrouds, and tall brown hats. The spinning is a form of worship. The ceremony represents a spiritual journey: the dervish attempts to act as a bridge between mankind and the gods.

As the dervishes turn, one arm reaches towards the sky, taking from god and the other towards the earth, giving life to the earth. The whirling alludes to the centrality of the heart. This cultural tradition exemplifies a core theme of the dinner — peace. To achieve world peace, it is necessary to share and teach elements of our cultures, as that is how understanding is achieved. Exchanging of culture and ideas reveals the humanity in others.

Whirling Dervishes was not the only tradition the audience experienced. Speakers also discussed Ramadan, the four-week long, summer Muslim tradition, during which members of the faith fast between sunrise and sunset. Jerusha Lamptey, Muslim feminist scholar discussed how Ramadan was not only about atoning for sins, but about the cultivation of self-control and self discipline. Ramadan is supposed to cultivate a sense of compassion or empathy for people who are starving; however people who have the choice to fast only gain a glimpse at their real privilege. In her speech, Lamptey alluded to the theme of food justice. She talked about how from Ramadan we see the food system for what it really is and we see that we are all a part in the system. She discussed how going to the grocery store and buying food perpetuates the system that leaves millions hungry.

Many of the speakers discussed the importance of interfaith events and what the dinner truly represented.

“We are bringing our hearts together in love and that is what Ramadan really means,” Dr. Serene Jones, the president of the Union Theological Seminary, said.

People of many different faiths and nationalities came together at the dinner, placing aside often contentious disparities in opinion of belief, to sit down, laugh and eat together.

One of the most meaningful parts of the dinner was hearing a quote by Rumi: “Out beyond ideas of wrong doing and right doing there is a field. I’ll meet you there. When the soul lies down in that grass, the world is too full to talk about. Ideas, language, and even the phrase ‘each other’ doesn’t make any sense.”

Events such as these represent humans making their way to that field.