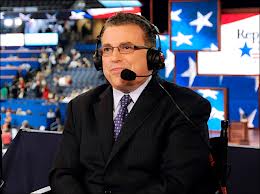 Ignoring the First Amendment principles, Yahoo News has fired its Washington Bureau Chief David Chalian after he was caught on a hot-mic during an online video broadcast saying that Mitt Romney and his wife, Ann, had no problem with African Americans suffering as a result of Hurricane Isaac.

“They’re not concerned at all. They’re happy to have a party with black people drowning,” Chalian said over a break during the ABC News/Yahoo News webcast, in reference to the fact that the GOP convention in Tampa is taking place as Hurricane Isaac makes landfall on the north Gulf coast.

“We have already reached out to the Romney campaign, and we apologize to Mitt Romney, his staff, their supporters and anyone who was offend,” she said.

By this action Yahoo News has extended the queue of unemployment in the country by one person.

Without supporting the journalist’s comments, it is clear that Yahoo News’ action is tantamount to intemperate action that matches intemperate utterances. That is not how it should be. In this political season lots of people make wild comments or gaffes. Many of them apologize and move on without losing their jobs.

The action of Yahoo News is unexpected of a news organization in the US but resemble what one could expect from Robert Mugabe’s Zimbabwe where freedom of expression is a luxury.

Pause for a second and imagine the reaction of journalists and human rights activists if the circumstances that led to Chalians loss of his job occurred in undemocratic countries. It will be condemnation, agitation for free speech and all that.

While Yahoo News is not operated by government or dictatorships, its action is clearly a manifestation of the subtle power of Corporate America which is as powerful as dictatorships in emerging countries. Yahoo News is indeed pandering to the political elites and powerful financial titans of our times by casting David Chalian into the labor market.

Yahoo News’ action is even more unacceptable because it took the action too hastily without considering David Chalian’s apology. David offered a profuse apology on Face book:

“I am profoundly sorry for making an inappropriate and thoughtless joke. I was commenting on the challenge of staging a convention during a hurricane and about campaign optics. I have apologized to the Romney campaign, and I want to take this opportunity to publicly apologize to Gov. and Mrs. Romney. I also regret causing any distraction from the exceptional coverage of the Republican convention by Yahoo News and ABC News”.

Firing Chilan will definitely arm critics of the media. Almost every speaker at the GOP convention railed at the media for being biased in reporting conservatives’ values. Now and again, prominent right wing ideologues have accused the media of supporting left wing ideologies.

The media will continue to be the victim of political bickering between the left and right. Either side of the political spectrum criticizes the media when it is convenient but will never applaud the media when it exposes malfeasance and ineptitude of their making. The truth is that politicians rationalize media behavior from a selfish and myopic perspective.

Innocent Victims: The Unintended target of US sanctions

US adjusts trading strategy with Africa, leverages the power of Africans in Diaspora