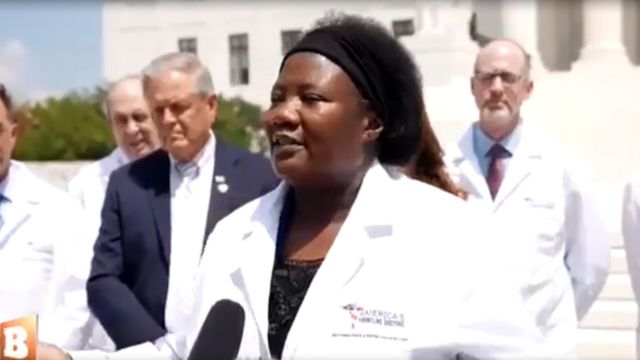 Again, Nigeria is in the news! This time not for living in “huts and s… hole” country, but for spirited debate on the correct treatment of coronavirus pandemic. The conservative media and allies of President Trump appear to be embracing the views of a Nigeria-trained medical doctor based in Houston – Stella Emmanuel who is stressing the efficacy of the discredited Hydroxychloroquine in the treatment of Coronavirus.

When someone appears on TV wearing a white lab coat and a stethoscope around their neck, they are selling something. A number of scientific studies have determined that Hydroxychloroquine is not only ineffective against the coronavirus, but that it could cause fatal heart arrhythmia and death!

While I share the same African heritage with Emmanuel, it is important to remind Americans that she also serves as the head of Fire Power Ministries, which is located in a Houston strip mall and promotes a baptism of fire program that offers “miracles, healing, and deliverance.” Therefore, her medical expertise in the treatment of coronavirus is questionable.

The religious group has claimed that COVID-19 is a hoax. If it’s a hoax, there is no need for a cure in the first place. She was quoted as saying “if my page is not back up, Facebook will be down in Jesus name…” Really? Today Facebook is still standing.

Quiet often, I get calls of these conspirators and sometimes the callers will even provide grainy highly-magnified cellphone images as evidence that they are not crazy. Unfortunately, much like pictures of Big Foot, they seem to be taken at the lowest resolution possible with a 20-year-old Nokia Flip phone while driving at highway speeds over a rutted gravel road.

As with most conspiracy theories, it involves a hefty dose of setting aside common sense and reason. Not to mention disregarding the more obvious reason why something may be occurring. In the case of the annual sighting of low-flying, slow moving helicopters, the logical reason is that they are out inspecting Xcel Energy’s transmission lines. Since transmission lines are up in the air, it is easier and quicker for the power company to check the lines with helicopters than any other means. I have to think it is a twisted sense of humor that drives them to paint these things black and making them look as sinister as possible.

The growth in conspiracy theories is somewhat troubling and, in some cases, fairly ironic such as the over-the-top religious types who are very vocal in casting doubt on anything they themselves did not witness. I seem to remember a story about a guy named Thomas that has the same sort of issues.

It is also interesting how the conspiracy theories seem to heavenly reinforce the preconceived ideas of the people who have them. The further out on the fringes you are on each side of the aisle, the wilder the theories become. Could you believe that one of the lawmakers here in USA, sued a local government for mandating mask wearing. Arrogant lawmaker or stupid?

As a medical Professional, Americans should disregard the recent conspiracy theories of Dr. Judy Mikovits et al, a known figure in the anti-vaccine movement whose body of work includes a study on chronic fatigue syndrome that was roundly criticized in the scientific community and abruptly retracted in 2011. In a recent 26-minute concoction called “Plandemic” they argue that America’s top doctors, particularly Dr. Anthony Fauci, a member of the White House’s coronavirus task force and the nation’s leading expert on infectious disease— cannot be trusted to provide information on the crisis. Their story is that “Dr. Anthony Fauci manufactured the Coronaviruses in monkey cell lines and shipped them to Wuhan, China, where the illness was first detected.”

The documentary was banned from Facebook and YouTube for providing false information on COVID-19. As people continue to die from COVID-19 we are subjected to this nonsense. The ‘report’ has been discredited and yet… some Broadcast Networks air it as factual. It is wrong and dangerous. This is so insane it isn’t even worthy of having to be discredited, it would be like a report on how pigs can fly had be discredited.

The temptation to broadcast discredited conspiracy theories is further confirmation that a section of the news media traffic on ignorance, hate, and suspicion because false narratives sell in the age of fragmented mediascape. Money. And as long as you don’t care how much damage you do, how many people your lies kill or what happens to the country as a result, then, hey, you’re good!

A conspiracy nut says things and an extreme right news network supports it. That’s all it is going to take to go viral. Maybe we can also stop the right-wing whinny myth about the “main stream media”.  Of course, a bizarre and ridiculously complicated theory is what these people accept as the reason for coronavirus. But I guess that covers all conspiracy theories. I am surprised this angle has taken so long. Millions will believe it. It simply astounds me that so many people want to be willfully ignorant. This is all so tragic and terrifying.

I particularly enjoy when people go on social media rants about “main stream media” cabals that gather in clandestine meetings to practice mind-control techniques. In all honesty, I am privy to some, when groups of newspaper people get together, the biggest question is where the bar is located and then after a few rounds tell about how great their towns are compared to people from other places…. even if there seems to be an awful lot of black helicopters flying around.

Dr. Osy Ekwueme is a practicing physician in the United States.