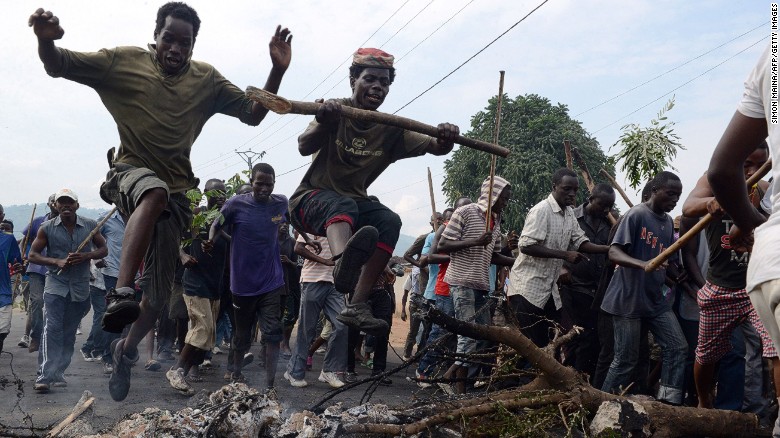 Burundi has erupted in celebrations following a military coup ousting the unpopular President Pierre Nkurunziza, though it remains unclear if the coup will stick.

Major General Godefroid Niyombare, who led the coup, said a salvation committee had been established, but a spokesperson told BCC that the president’s forces were in complete control.  Mr. Nkurunziza, who was seeking a third term despite constitutional limits, fled to Dar Es Salaam, Tanzania to speak with other state leaders among the East Africa Community (EAC), and rumours from sources on the ground indicate he is now on his way to Bujumbura, Burundi.

“The situation in the country is still extremely muddled,” France 24 reported.

A representative from the Burundi Mission to the United Nations said the mission was waiting for information from Bujumbura and could not comment further.

According to statements from sources in the area, who wished to remain anonymous to protect their status with the Burundi government, the military is seeking to instate an interim president and hold presidential elections as soon as possible, with only about two month’s delay.

Mr. Nkurunziza’s’s public statements have aimed to deny the coup, and later, downplay its significance in order to maintain order.

“The situation is under control. There is no coup d’etat,” the Burundi Presidency tweeted in French at 5:14 EST this morning. A subsequent tweet a few minutes later stated the coup had failed.

“The President of the Republic declares that national and international opinion says this coup has failed and the perpetrators are being pursued by defense and security forces to be brought to justice,” a press release five hours later added.

It appears Mr. Nkurunziza is following a historic mantra of despondent African leaders to deny an issue’s existence and hope it defuses. But his changing statements on the coup might tarnish the leader’s credibility to both valuable international allies and his citizens during this fragile period.

Amidst weeks of violent protests and police brutality, Mr. Nkurunziza said before the coup that his government would investigate and punish protestors and private radio stations accused of supporting them. In the past few weeks, his administration has been restricting access to social media and communication apps such as viber, regional sources told CMPI through SMS.

The East African Community has been slow to act on the festering crisis. It condemned the coup Wednesday and is slated to hold a summit in two weeks, according to live update tweets.

Regional diplomacy has made denouncing Mr. Nkurunziza’s drive to stay in power difficult, with the EAC opting instead to “call for dialogue.”  Views on term limits vary among East African nations. Kenya and Tanzania have retained term limits, but Uganda abolished them in 2001, and Rwanda’s Paul Kagame, scheduled to leave office in 2017, said he would leave the matter up to the people of Rwanda.

Following a diplomatic mission of her Permanent Secretary that delivered 150 laptops to Burundi’s electoral mission at the beginning of May, Kenya’s Foreign Affairs Cabinet Secretary Amina Mohammed told The EastAfrican she hoped for peaceful and fair elections but would put forth a position on Mr. Nkurunziza’s relection campaign.

In light of the violent coup, the electoral mission might have to wait a bit longer to make use of Kenya’s laptops. But the presidency, regional dissenters andpolitical analysts are in accord that Burundi should hold elections soon and transition to a newly elected government.

The airport at Bujumbura was shut down this morning and has yet to reopen.