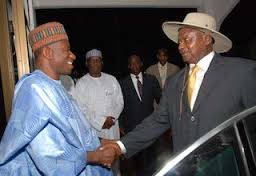 By Osmond Ekwueme
Legislation imposing repressive sanctions on gays have recently been adopted in Nigeria, Uganda, and some other African countries. In Nigeria it was signed into law by President Jonathan Goodluck, at the beginning of the year 2014 just like President Yoweri Museveni of Uganda. It was really a momentous decision and entering into risky endeavor where the outcome is left to chance. When people who just vaguely felt uncomfortable by homosexuality, or hadn’t thought much about it one way or the other, had to see the arguments for the law…we come to conclusion that the law really made no rational sense. Every time we witness an act that we feel to be unjust and do not act we become a party to injustice. The operative structure of bad governance is always associated with most witnessed acts of injustice.

In a Pew research center survey conducted last March, 98% of Nigerians said they do not believe society should accept homosexuality. This must be a backlash against the new visibility of gay people. Therefore, the legislation was designed to please the majority of the populace …an argumentum ad captandum. It was not a well-thought out law. Self-righteousness tends to cloud the ability to reason and deliberate.

The law Nigeria adopted is harsh and imposes a 14yrs prison term for anyone entering into same-sex relationship, as well as a 10 yr sentence for anyone found to support gay clubs or meetings. The law is really about protecting bigoted, homophobic Christians and Muslims from another of God’s unique creations…creations that they perceive as “damaged” or “inferior”. God knows the law flies in the face of common sense. The next law should be stoning adulterers…..it is then, we will know they are serious but how many lawmakers will be left standing!! I believe the Bible is sacred and that it is a collections of sacred parables and letters meant to guide one’s life and meant to be taken literally most of the times and sometimes figuratively and with reason.

Gay sex has been illegal in Nigeria since British colonial rule; but convictions were rare in the South and only occasional in the mostly Muslim North. One may ask why this draconian law now? The saying “more law, less justice” summum ius summa inuria holds true here. The difference when it comes to dealing with gay people is because of Southern Christian culture. Africa’s culture trump theology. The genteel Southern neighbors don’t want to know, hear about, or learn about your private lives. Gay people were regarded as social deviants but still were treated with respect as human beings. Most straight Southerners I know see people making out at cinema (movie) theater and want them thrown out. The south has always been a place where you keep private life private and others can gossip about it if they want. I even remember that kissing one’s girlfriend at a dark street corner is done in a way that no one sees you and relate it to your parents. Yes, many Southerners are a bit prudish in general and grew up thinking private lives were meant to be private. I am a product of that region and I know what I am talking about. Our custom is our law…we don’t need new laws. It has always been known that when a republic is at its most corrupt the laws are most numerous.


This is a religious fanatic law that borders on obsession and madness. They no longer feel bound by present society’s laws, passing into a conviction that they answer to a higher authority. It welcomed the rejection of civility toward others. While I don’t know other religious beliefs, but as a practicing Catholic, a man of faith…..I do think I know Christianity. This makes me wonder, how can someone claim to be Christian and yet ignore the teachings of Jesus? “In ALL things do unto others as you would have them do unto you for this is the law……” There are no exceptions. Catechism of the Catholic Church explicitly states that gay people “must be accepted with respect, compassion and sensitivity” and that “every sign of unjust discrimination in their regard should be avoided”. Our Holy Father, Pope Francis I , when asked about his approach to gay people said “The church stand is “ Who am I to judge them”. Enough said here. And the last time I checked the Bible, God pretty much said that judging others isn’t really something mere mortals ought to be doing. Honestly, this seems as a Sharia law by any other name. This is making end runs around democracy. Nigeria is not a Theocracy and will never be.

One of the pastors supporting this law was quoted as saying he doesn’t care if it is bigoted, homophobic or whatever and that if the Bible says 2+2 = 5, he’d believe it. This shows how emphatically ignorant and hateful some Christians are willing to be. God never intended us to be stupid. Biblical faith wants nothing to do with a mindless Christianity. Compared to other religions, Christianity is “preeminently the reasoning religion”. The Bible commands people to know what they must believe in. The Catechism of the Catholic Church teaches that and late Pope John Paul II’s encyclical, Fides et Ratio, also affirms that God’s existence is a fact demonstrable by reason. Indeed, if one does not attempt to understand what one believes, one does not really believe. “Blind Faith” is not true faith.

Laws that targeted a particular group of people are dangerous to our society. They promote further division at a time when Nigeria is already deeply divided. One of the biggest flaws with people who defend this law is that they lack any kind of imagination whatsoever. They cannot for the life of them imagine that this law could result in them being victims of discrimination. They, after all, are not gay. Bigots are rarely rational, logical or critical thinkers. Nigeria will become a happy hunting ground for all sorts of extortion schemes. People will accuse others of homosexuality because they want their job, their girl friend, their property___ or they will accuse others of homosexuality as a sort of pre-emptive strike (accuse them before they accuse you). It will create a society in which no one is safe.

Gay people are not existential threat to Nigeria as Boko Haram is. Nigeria has better things to worry about than sexuality. It is certainly not moral to criminalize and marginalize a group of people.