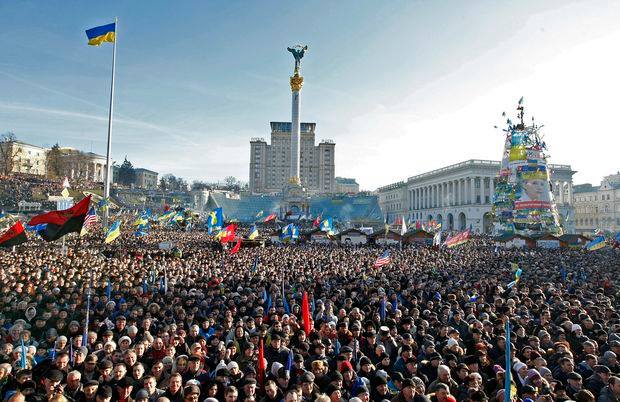 As an American who follows Ukraine, I’m often asked how I keep up with the ever-changing political situation in the country. Despite Ukraine’s relatively free press and vibrant civil society, staying informed and avoiding fake news is easier said than done. Many of the most accessible English-language news sources are funded by oligarchs or other politically connected special interests. To separate the signal from the noise, I will address two common misconceptions about Ukraine—and offer sources to counter these misleading narratives.

MISCONCEPTION 1: The Maidan Revolution in 2014 ended in victory for the Ukrainian people when pro-Russian dictator Viktor Yanukovych was deposed. During the Revolution of Dignity, the world watched as scenes of violence, destruction, and hope for the future unfolded in the heart of Europe’s largest country. Although the Ukrainian people, fortunately, succeeded in ousting Yanukovych, the “pro-Western” government that replaced him, sadly carried on his legacy of corruption and lawlessness.

According to a recent article by the European Council on Foreign Relations, “The central demands of the revolution of dignity were to transform Ukraine into a country that respects the rule of law, treats its citizens equally and respectfully, and puts checks and balances in place to prevent the unlawful enrichment of political elites. [President Petro] Poroshenko and his government have failed miserably regarding all of these demands…his administration is transforming new Ukraine into a mirror image of the old Ukraine.”

The most reliable major English-language outlet in Ukraine, Kyiv Post, offers daily insights on the fight against corruption and on the country’s ever-changing political landscape. Radio Free Europe/Radio Liberty also covers Ukraine more closely and objectively than most English-language outlets. Independent Ukrainian journalists, such as Mykola Vorobiov and Rostislav Shaposhnikov, are also excellent sources of information—but tend to publish their most detailed reports in Russian or Ukrainian language.

But Ukraine’s political elites spend vast resources countering this narrative in the United States, especially because the survival of the regime depends on IMF loans and foreign aid. Despite overwhelming evidence, Washington think-tanks and media outlets still offer a platform to those who contend that Ukraine’s government is making progress toward reform.

Of course, buying influence in Washington is not a phenomenon unique to Ukrainian oligarchs. But for would-be Ukraine watchers, it is especially important to investigate the source of pro-government claims. Op-eds written by Ukrainian government officials, articles authored by “experts” who run consulting businesses in Ukraine, and even the opinions of American officials who worked with Poroshenko’s government on unsuccessful reform initiatives are not objective sources of information—even if they are published by reputable outlets.

On the other hand, some American officials who have worked in Ukraine—like former USAID consultant Josh Cohen—do offer thoughtful critiques of where reform efforts went wrong. Likewise, while think tanks like Atlantic Council are certainly not immune to political pressure, scholars like Anders Aslund and Violeta Moskalu highlight Ukraine’s corruption crisis and failure to reform. The Jamestown Foundation is also an excellent source of information on Ukraine’s political landscape.

Finally, the best information about Ukraine comes from primary sources, such as the recent Cato Institute panel “Is Ukraine on the Right Course?” that featured different perspectives from on the ground (quite literally, as opposition leader Mikheil Saakashvili Skyped into the meeting from a protest in Kyiv). Cato Senior Fellow Andrei Illarionov, who served as the moderator, offers a wealth of reliable firsthand knowledge about Ukraine in English and Russian.

MISCONCEPTION 2: Because Ukraine is at war; anti-corruption crusaders like Mikheil Saakashvili are “destabilizing” the country. Ask a Ukrainian to name the country’s biggest problems and you’ll likely hear one of two answers: “Corruption” or “Russian aggression.” Politicians, the media, and international observers often treat these as distinct challenges, but in fact, they’re inseparable. Indeed, corruption and oligarchy create a serious national security issue. The Ukrainian political elite made their vast wealth in Russia, and the president himself has enormous business interests in Russia.

Moreover, Ukraine is unstable, but not because of political opposition leaders. In the four years since the last revolution, living standards have plummeted as corruption mushroomed. The broken promises of the revolution created the instability in Ukraine, not Saakashvili and his ilk. Saakashvili simply gives a voice to the Ukrainians suffering every day from poverty and lawlessness. The popularity of controversial opposition leaders stems from the reality that the government has not done enough to address these serious problems.

HONORABLE MENTIONS: Reform-oriented political leaders do exist in Ukraine. In addition to Mikheil Saakashvili, who publishes updates and news in Russian, Ukrainian, and occasionally English on his public Facebook page, I follow Serhiy Leshchenko, Oksana Syroid, Mustafa Nayyem, Egor Sobolev, and others on Twitter. Although they speak English, they usually post in Ukrainian. This is not an exhaustive list, and I would welcome further recommendations from fellow Ukraine-watchers.

Christina Pushaw is a Political Consultant based in Washington, D.C.

Health insurance and a pre-existing condition