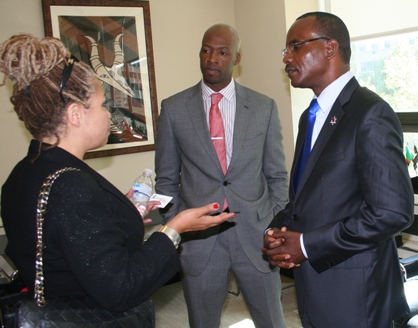 Okere exchanging views with Ms. Nicole Peacock of the State Department at the CMPI Dialogue in New York while John Kiganda (middle) of Africa Diaspora for Change looks on

Early this year on February 20th, we were invited to the White House by the White House Business Council on the forum captioned “DOING BUSINESS IN AFRICA.” The focus was: Putting Africa into perspective. I believe that caption rhymes very well to today’s dialogue “POWER AFRICA”
My comment during the breakout session of the Doing Business in Africa forum, was aimed to get our focus in-line with the ancient Chinese proverb that says: “Give a man a fish and he will eat for a day; teach a man to fish and he will eat for a life time” Which means Africa needs strong working friendly partners. Africa does not want to remain a Charity Case. We need trade and we need willing partners to elevate our people.
When President Obama along with first Lady and their daughters traveled to Africa last June, The President made a visit to Ubongo Symbion power plant in Dar es Salaam Tanzania.
THE President declared the Power Africa initiative. For me, this is one of the positive ways to put Africa in perspective. And I’m very proud to say that Continental Africa will remain grateful to this administration. Thank you, Mr. President for this timely intervention.
I grew up in Nigeria, in a town called Obibiezena in Owerri -North Local Government Area. I know the horror of DARKNESS. It’s a setback, and obstruction to progress, and to our children’s ambitious future.
As the chairman of the Maryland Nigeria Sister State Executive Committee along with the office of the Secretary of State of Maryland – Mr. John P. McDonough, and his deputy Dr. Rajan Natarajan with over 20 business leaders led a successful trade delegation to Cross River state and Ondo State in November 2012.
There, we visited a snack food factory in Calabar. The CEO of the factory explained the scary aspect of his business in the region; how power [electricity] has been the only impediment to the progress of his business. Remember, Power problem in Sub Saharan Africa is pretty much the same in the continent.

January 1999, my daughter was three years old _ now she is seventeen; her first time to Africa was a nightmare. She cried every night because there was no light at my sister’s apartment in Ikeja Lagos. Lights go out consistently the weeks we were in Ikeja in Lagos. To a point we had to move from one hotel to another every night.
The affordable hotels in the area at that time do not have well maintained standby generators.
A life, a home, a business or a city without power [Electricity] in Africa is scary, horrifying, and it’s a wilderness full of mosquitoes. This is how we all grew up. We studied with lanterns, candles, or even firewood when parents could not afford kerosene or candles. Thank God we produce smart and intelligent people in spite of the insufficient energy and infrastructure challenges.


WHAT THE GOVERNMENT MUST DO
1. Robust Partnership with Diaspora Africans and our American friends, and partners who wish to support us to brighten and improve the standard of life in Sub Saharan African families.
2. The host governments must eliminate the bureaucratic bottlenecks and red tapes to accommodate real change
WHAT DIASPORA MUST DO
1. THIS CAMPAIGN: what we are doing here today through CMPI dialogue is a perfect example of what we should be doing, and the best way to promote and advance President Obama’s Power Africa agenda.
2. SOLIDARITY: we must work together to support and sustain President Obama’s vision to Power Africa and put Africa into an enviable perspective Working together will facilitate the Obama Power Africa now he is in the White House.
3. WE MUST BE WISE AND CIRCUMSPECT:
We must be careful and avoid unnecessary sectional struggle which had long prevented our progress and rendered the Diaspora community unprogressive and dysfunctional because of the unnecessary in-fights instigated through strife and bickering of egoistic members.

Being a speech delivered at the CMPI DIALOGUE in New York by Dr. Sylvester Okere, Executive Director of Continental African Leadership Council (CALC)

Media freedom under assault in US, Report finds