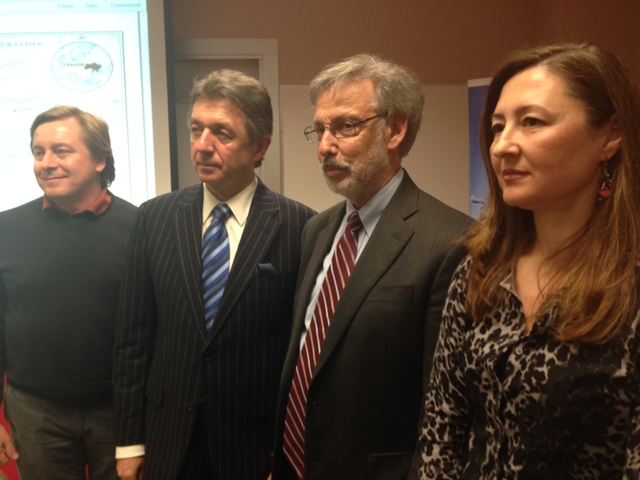 By Francisco Bozzano-Barnes
Amid the controversy about the circulation of anti-Semitic pamphlets in eastern Ukraine, the country’s Ambassador to the United Nations, Dr. Yuriy Sergeyev has rejected such campaigns suggesting that it was part of Russia’s propaganda machine designed to present Ukraine in a negative light.

The Ambassador also said that the accusations appearing in the media about Nazis in Ukraine were a Russian smear tactics orchestrated by the Russian media.

Ukraine’s top diplomat told an audience at the 3rd Annual Conference on Media & Democratic Governance poignantly themed “Seeing through the Spin: Sorting Fact from Fiction in Public Information” that his country needed the support of the international community to overcome the threats from Russia.

Dr. Sergeyev who was the keynote speaker at the conference hosted jointly by The Center for Media and Peace Initiatives (CMPI), Rutgers University-Newark School of Public Affairs and Administration (SPAA), The Society of Professional Journalists (NJ Chapter) used the opportunity to clarify doubts about the territorial limits in Ukraine and confirmed that the existing borders were clearly established before the ongoing crisis. He addressed the territorial disputes between the country and Russia and claimed to have been party to the pertinent UN discussion, where there had been general agreement on Ukraine territory.
The Ambassador requested the support of the International community for a country that gave up her nuclear capability in exchange for security guarantees from both Russian, US and other western powers. Whether the security guarantees are effective in the wake of Russian aggression is an open debate.

Visiting Ukrainian journalist, Alexander Ostashko, the Editor-in-Chief of Context Context-Prichemomorie News Agency provided useful perspectives on the state of media in Ukraine and painted a gloomy picture for the industry.

Mr. Ostashko who spoke through an interpreter, Dr. Olga Zbarskaya, a director at CMPI stated that contrary to some reporting, media does not support terrorism in Ukraine.

He lamented the lack of adequate resources for the media in Ukraine, pointing out that professional development of journalists and institutions for training of media professionals were grossly inadequate.

The media in Ukraine, Mr. Ostashko observed, was under the control of the military while the mainstream media was under the strangle hold of financial interests, the oligarchs, and indeed Russia’s political elite believed to exert intense pressure on news organizations in the region.

Richard Brodsky, Senior Fellow at the Wagner School of Public Service at New York University and former Chair of the New York State Assembly Committee on Authorities and Commissions spoke on the Bridgegate Scandal currently afflicting the Chris Christie’s administration in New Jersey.

Drawing from his experience managing the New York portion of Port Authority, Mr. Brodsky attributed the circumstances that led to the closure of George Washington Bridge by New Jersey Governor’s aides to lack of oversight and disregard for established checks and balances.


“The Port Authority: Will It Survive? Should It Survive?” – the focus of Brodsky’s luncheon lecture provided him the opportunity to x-ray public administration’s do’s and don’t’s stressing the need for due process, transparency, recognition of the fiduciary duties of trustees and the budget office.

Earlier at the signing of a Memorandum of Understanding between SPAA and the Center for Media and Peace Initiatives, Dr. Marc Holzer, Dean, School of Public Affairs and Administration, Rutgers University maintained that a free press was the “sunshine of our democracy”.
He noted that there wasn’t enough support for the media and expressed the hope that SPAA’s partnership with CMPI would empower the media to support public policy towards peaceful outcomes.

In a response, Dr. Uchenna Ekwo, President, Center for Media & Peace Initiatives reiterated the commitment of the center towards the professional development of diaspora journalists, saying that the center’s New York location was strategic being the media capital of the world with abundant resources for media training.

Dr. Ekwo praised SPAA as one of the leading schools of administration in the country adding that the school’s expertise in performance management would be vital in providing needed training of journalists in public policy and good governance.