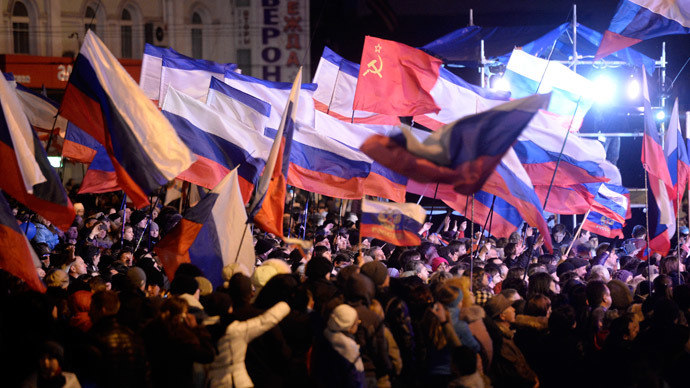 About 97 per cent of Crimean voters on Sunday overwhelmingly backed a referendum to secede from Ukraine and join Russia, in an election denounced by the United States, Europe, and the Ukrainian government as illegal and destabilizing.

A similar referendum took place on January 9, 2011 in Sudan on whether South Sudan should remain a part of Sudan, an Africa country plagued by fratricidal wars. Almost by a similar margin as the recent Crimean referendum, the people of South Sudan voted overwhelmingly to secede from Sudan.
The difference between Crimean and South Sudan referenda is that while the former is denounced by the powerful American and European axis, the latter received the blessing of the United Nations, United States, Europe and many others. Another sharp distinction is that whereas the people of Crimea voted to join another country, South Sudan voted to become independent and thereby became the youngest nation state to date.

These differences notwithstanding, the spate of referenda and agitation for self determination in Russia, china, Africa and other parts of the world are indicative of a world order that is insistent on correcting past injustices and redrawing of erroneous international boundaries. The referenda revolution is catching up and it is a symptom of the need to right the wrongs of the past. Watching on television the jubilant crowds and the fireworks that exploded at the end of Crimean votes, I felt the passion and nostalgia that the citizens might have felt.

As the former Soviet leader, Mikhail Gorbachev told reporters after the referendum that Crimea’s choice corrected past mistakes of the Communist regime in Moscow. In his words: “earlier Crimea was merged with Ukraine under Soviet laws, to be more exact by the [Communist] party’s laws, without asking the people, and now the people have decided to correct that mistake.”

Historically, Crimea had experienced a litany of annexations between 1783 and 1954 by Russia, Germany, USSR, and lastly Ukraine. Before this latest annexation, the former Russian Premier Nikita Khrushchev had “donated” Crimea to Ukraine in 1954 as a gesture of goodwill for what analysts could not explain completely other than that Khrushchev may have acted because he had Ukrainian roots.
It is with this historical lens that I view the reactions of United States and Europe over the latest annexation of Crimea by Russia as mere posturing. Instead, world leaders should work to correct the mistakes of the past.

Nowhere are these mistakes more rampant than Africa where borders were carved out by colonial administrations without the consent of indigenous peoples. In November 1884, at the request of Portugal, the then German chancellor Otto von Bismarck called together the major western powers of the world to negotiate questions and end confusion over the control of Africa in the famous Berlin conference. At that conference not a single African participated and yet they divided Africa among themselves and in most cases separated kith and kin and put them in different countries. Today, you find the Yoruba ethnic group in Nigeria scattered in neighboring Benin Republic, and Togo; then the Ewe speaking part of Ghana also found in Cote d’Ivoire. In East Africa, Kenya, Somalia, Rwanda, Burundi have similar stories of separated kith and kin.

In fact, most of the wars and violence in Africa are traceable to these artificial boundaries. The Biafra war in Nigeria that took place between 1967 and 1970 is believed to have occurred because disparate entities of present Nigeria were forced to coexist together not by their will but by the whims of political expediency. One hundred years after the amalgamation of the North and South of Nigeria, that country still faces the challenge of a forced union.

So if Mikhail Gorbachev recognized the Crimean referendum as a measure to right the wrongs of the past by seeking peoples opinion over where they choose to live, the world should start a movement towards holding referenda in countries where history forced a union without the consent of the people. Perhaps, this could be a panacea to the much needed world peace and unification.

Therefore, United States and European Union should stop wasting time imposing sanctions that will not achieve the goal of reversing the referenda revolution in Crimea or Russia. Instead, they should redirect their energies to conflict zones especially in Africa where political actors ignored lessons in consanguinity in state formation.

The chances of political and economic stability are more in states with common language and identity. United States is stable because they speak the same language and citizens are therefore able to communicate with one another without interpreters. In Crimea, 60 per cent of the population speaks Russia as their native language and their integration into the Ukraine society must have been challenging. So their choice to join their kith and kin in Russia is partly a quest to be in a political space where they could communicate better.


In the final analysis, let freedom reign; let the choice and voice of people prevail around the world; and may the referenda revolution go on. The states that were formed without the consent of the people should correct the mistakes of the past. Countries where national elections are scheduled soon should include referendum-like questions in the ballot.
For example, Nigeria, Africa’s most populous country could be the next place to test the power of referendum. Instead of wasting time and resources in conducting what it called Sovereign National Conference, the authorities in Nigeria should include in the ballot in next year’s general elections to ask citizens if they wanted Nigeria to continue as a country or three countries. Such a step might be the beginning of the end of ethnic-motivated violence that undermines development and economic growth in Nigeria and other African countries. A referendum is indeed democracy in action. And for all lovers of democracy around the world, let the people make a choice as to where or country they want to be.