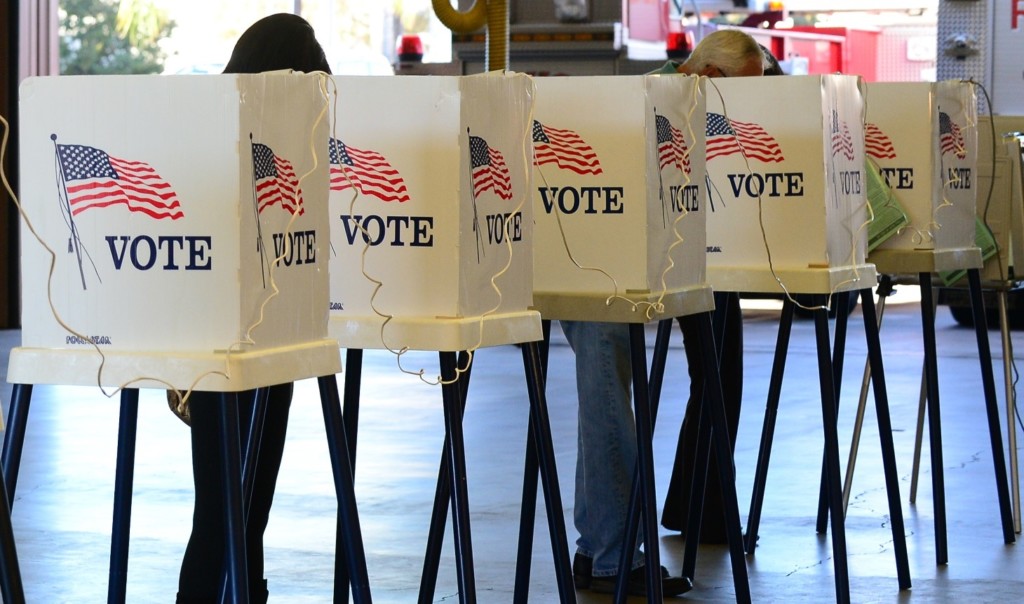 Citizens vote on Election Day at Fire Station #71 in Alhambra, Los Angeles County, on November 6, 2012 in California, as Americans flock to the polls nationwide to decide between President Barack Obama, his Rebuplican challenger Mitt Romney, and a wide range of other issues. Alhambra is one of 6 cities in California's 49th Assembly District, the state's first legislative district where Asian-Americans make up the majority of the population. AFP PHOTO / Frederic J. BROWN (Photo credit should read FREDERIC J. BROWN/AFP/Getty Images)

With the 2016 conventions of the Democratic Party and the Republican Party over, the stage is set for the full campaign season for the November presidential election in the United States. At the event, RNC formally nominated New York billionaire, Donald J. Trump as its presidential candidate while DNC followed a week later to make Hillary Clinton its presidential flag bearer, the first time a woman clinched a presidential ticket of any major political party in US history.

Notwithstanding the blitz, glitz, thrill, razzmatazz, choreography, and excellent testimonials for both candidates that surrounded the conventions, a majority of the American voter may not have been more confused or orphaned in a presidential election year. Yet, the parties offer quite distinct contrasting views of America. How did the country get to the point of decision paralysis in performing the most sacred civic duty in a democracy – voting in elections?

The Republican Party nominated Donald Trump who is not loved by the party especially the political elite. Trump’s appeal flows from the angry grassroots Republicans especially the so called white Americans who feel threatened by an increasingly ‘chocolate’ America. On the other hand, Democrats in an opposite appeal chose a candidate- Hillary Clinton anointed by the political elite in the face of strong objection from the grassroots. What a paradox? The GOP elites including past Republican presidents and two immediate presidential candidates oppose Trump while ordinary folks like his politics. For Hillary, all Democratic leaders are in tank for her historic adventure but the Bernie Sanders’ crowd representing the base of the party resent the spouse of a former president with passion.

The electorate stands at a crossroad. Hillary is viewed as smart, experienced, competent, and qualified to be president. In a ringing endorsement of Hillary, President Obama captured the sentiment of the Democratic Party elite when he told delegates at DNC convention in Philadelphia that “No man, woman: Not Me, Not Bill, Nobody  is better qualified than Hillary to be president of the United States”. The large swath of the US population who hates Hillary including the ordinary folks in the Democratic Party certainly disagrees with President Obama’s testimonial of his former Secretary of State. Supporters of Bernie Sanders – Hillary’s rival in the primaries booed several speeches at the Democratic Convention after orchestrating the ousting of DNC chair – Debbie Wasserman Shultz who was viewed as biased towards Hillary. In fact, the grassroots opposition was so strong that the party barely pulled the convention from the brinks.

Conversely, Donald Trump is generally viewed as dangerous, intemperate, and unqualified to become president of the United States even in the face of massive support from Republican primary voters. His party leaders treat him as a petulant child. They often come to clean up the mess he consistently created along the campaign trail. Speaker of the House of Representatives, Paul Ryan, a Republican called him out several times including labeling Trump’s comments against a Federal Judge as “text book definition of racism”. Republican Senate Majority Leader, Mitch McConnell also acknowledged that the GOP candidate “doesn’t know a lot about the issues.” The fact that the highest Republican elected officials are not proud of a candidate chosen by the primary voters is symptomatic of the chaos and dystopia of American politics and frankly democracy.

Indeed, the choice presented to Americans in this presidential year exposes the shortcomings of the inherently binary nature of US politics. Hillary has numerous supporters just like Donald but in this year’s election, many voters – Democrats and Republicans don’t want to vote for either candidate. What are the options for this category of voters? Sit at home on Election Day?  No doubt, the binary nature of US politics denies some voters of their civic rights in a democracy thereby making them orphans in a democracy. The status quo presents a frustrating challenge for the future of democracy and the ability of the country to deal with a myriad of domestic and international issues.

Regardless of the outcome of the November election, the electorate will remain unsatisfied with what surely will be a continuation of politics of destruction and cannibalism. There will continue to be a contestation of values between two Americas aptly displayed in Ohio and Philadelphia within two weeks of both parties’ conventions. Should Hillary win in November, Republicans will continue their passion of fighting her every step of the way, reinventing gridlock in Washington in new ways. The situation might even be worse if American voters delivered Trump to the Oval Office because many Democrats, Republicans, and indeed the international community already frightened about the prospect of a Trump presidency will strive to delegitimize his administration.

Donald Trump made a lot of promises that can be delivered only in a dictatorship. He infamously told delegates at the Republican Convention in Cleveland, Ohio that “I alone can fix” America’s problems. Such messianic impulses are familiar refrains of dictators and not American democracy where there are three co-equal branches of government – Executive, Legislature, and Judiciary.  Donald Trump took for granted the power of Congress in the success or failure of his utopian proposals and did not seem to appreciate the need to walk across the aisle to convince law makers of the other party. As expected
Trump’s faux pas was exploited by Democrats including Obama who wittingly said America doesn’t “seek to be ruled”.

For Hillary who has served as Senator and demonstrated a capacity to work with Republicans in the past, it is unlikely that Republicans will give her a breathing space to advance what critics have called her dramatic shift to the left to satisfy Bernie Sanders group of liberals. Some of her policy proposals are likely to be buried in a hostile Congress still under Republican control thereby stoking anger and frustration among the electorate. As those who struggled for comprehensive immigration reform under Obama’s presidency can testify – all demonstration without legislation leads to frustration. Hillary had a taste of Republican obstinacy when, as First Lady, she failed to advance health care reform legislation under Bill Clinton’s presidency in the early 90’s. Will Hillary face a similar fate in a future Clinton administration? No one can predict the future but her experience in Congress will likely be an asset to the administration if she prevailed in November.

As troubling and confusing as the political terrain might be for American voters this year, one thing is clear: the American voter is not about to trade America for another country. For those orphaned electorate, they are likely to remain without a choice and voice. Do they have options? Should they emigrate to other democracies such as Nigeria? This is probably unthinkable. While democracy is on trial all over the world, America’s democratic participation is still better than many. At least, voters are sure their votes count in elections unlike some countries that manipulate votes and ignore the will of the electorate.