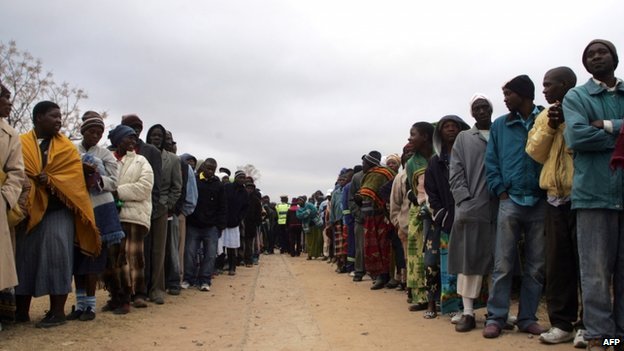 Zimbabweans queue to vote in presidential and parliamentary elections

Zimbabwe’s main opposition party, the Movement for a Democratic Change (MDC), and its candidate Morgan Tvsangirai, opposing President Robert Mugabe, have been overwhelmingly rejected by the Zimbabwean people. The vote tallies showed the MDC lost its majority in the parliament and the party of President Mugabe, ZANU-PF to achieve a two-thirds majority. This will also be the third time that Tvsangirai will have failed to unseat the western-vilified President Mugabe.

It is no secret that the MDC and Tvsangirai have been heavily supported by Great Britain and the United States, hoping to finally remove President Mugabe from office and weaken ZANU-PF, even though it was evident that Tvsangirai was already “a spent force” who has lost credibility, and whose support from the population has been in decline since the 2008 election.

While the apparently defeated opposition is screaming fraud, the two main African institutions observing the election dismissed these claims and accepted the elections as reflecting the will of the people even with their serious technical difficulties. Former Nigerian President Olusegun Obasanjo, who headed a 70-person African Union Mission to observe the election, declared it free and credible, based on available evidence. His observations were publicly corroborated by other members of AU delegation. All observers praised Zimbabwe for the peaceful nature of the election process. In response to Tsvangirai’s statement that the election should be considered “null and void,” Obasanjo responded that it is up to the opposition to back up their claims by submitting evidence to prove it. Representatives of the Southern African Development Community (SADC), which had over 500 observers in Zimbabwe, expressed similar acknowledgement of a credible election, describing the voting as “free and peaceful,” but imperfect.

With these African institutions supporting the election, the United States and United Kingdom will have more difficulty in outright dismissing the voting results, especially among the nations of Africa. Leading the charge to discredit the election has been the Zimbabwe Election Support Network (ZESN), a collection of non-governmental organizations which claim they had 7,000 observers at the polls, and that ZANU-PF disenfranchised almost 1 million registered voters. So far, the ZESN is the only organization to make such allegations. The ZESN is no innocent objective organization. It was formed about the same time—circa 1999-2000–as the British oligarchy and American allies, through the London based Zimbabwe Democracy Trust (ZDT), established the MDC and Tsvangirai as their tools for regime change.
Both the ZESN and the MDC were and are foreign-funded, created for the sole purposes of removing President Mugabe from office, following his defiant policy of redistributing Zimbabwe’s fertile land to the Zimbabwean people instead of allowing it to be controlled by 4,500 British-Rhodesian farmers. Renowned philanthropist, George Soros, through his Open Society Initiative for Southern Africa (OSISA), established in 10 southern African countries in 1997, has coordinated with the ZESN for regime change in Zimbabwe. The former national chair of the ZESN from 2001-2007, Reginald Matchaba-Hove, happens to now be a board member of Soros’s OSISA, as well as a darling of the National Endowment of Democracy (NED), an organization which is known, like Soros’s Open Society, to work to overthrow nations. The NED has funded the ZESN regularly with yearly grants ranging from $40,000 to $55,000.

According to an article appearing in {The Herald} of Zimbabwe on April 22, during the last four years the ZESN has also received over $5 million from United Nations Development Program, the Canadian Embassy, the Norwegian Embassy, the Royal Danish Embassy, the Electoral Reform International, Freedom House, the International Republican Institute, and the OSISA.

If the AU and SADC maintain their support for the Zimbabwe elections, and with Tsvangirai defeated, what new nasty operations against Zimbabwe and President Mugabe should we expect?

The challenge of moderating 2012 presidential debates