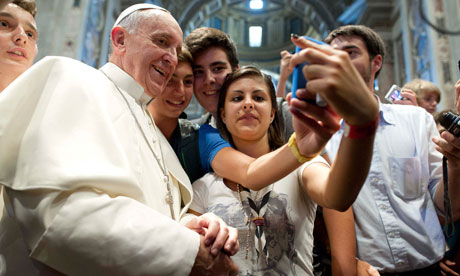 By Osmond Ekwueme
The first Jesuit pope said a lot in a long interview with the Jesuit American Magazine publications. Reading the entire interview was a revelation; rereading it prompts me to need to understand this extraordinary Pope better. That the church needs reform is certain; the interview proved Pope Francis knows this. The church is on the cusp of an opportunity to reform itself, and to give hope to the poor and to the ailing. As we all know, concern for the poor echos throughout the Bible.

God’s will was done when the Papal conclave gave the papacy to Cardinal Jorge Mario Bergoglio of Argentina. It seems the new Pope is saying…adeste fideles christi et ecclesiae….o come, all ye faithful for Christ and for the church. My Roman Catholic brothers and sisters are delighted to follow.

However, too much is being read into his words. People are hearing what they have long wanted to hear, instead of what he is saying. He is just changing emphasis. He is not changing teachings. Take this: “We cannot insist only on issues related to abortion, gay marriage and the use of contraceptive methods” he said. These should be raised “in a context” not “all the time”. He argues that the church is like a “field hospital” where one must tend to a patient’s wounds first and then take a holistic view of a person’s needs.

Ditto for most of the media who have magnified the Catholic Church teaching on sexuality as if it were the center piece of the faith. It is not and it has never been so. The church’s recent emphasis on sexuality had led it astray from the basic teachings that emphasize charity and concern for our fellow man. I am glad the good Pope is getting back to basics. The basic message that Jesus brought to humanity was one of love for our neighbor and of tolerance. The Pope is not reversing the church teaching concerning when life starts, but rather the notion that this should trump all other Catholic teachings and beliefs. It is a welcomed breath of fresh air. He condemned the pharisaic moment in the church. The Pope is going back to the Jesus of the Gospel.

It’s a sad depiction of so many Catholics’ smug hatred of others that the Pope’s obvious reminders to “Love Thy Neighbor” and “Leave the judging to God” is perceived as radical. His deeper insight is the priority of the person. Yes, in every way that matters to God, human beings are completely equal and completely loved. They can’t be reduced to ethical object lessons. Their dignity runs deeper than their failures. They matter more than any cause; they are the cause.

It’s tiresome but predictable that those wedded to enshrining Catholic ethical precepts in civil and criminal law are resentful of the Pope’s admonition for a little humility. 2000 years later, Christ’s exhortation to all of us to diminish ourselves and our natural wants in favor of the spiritual ones as the path to faith, true happiness and salvation. It means giving up the egocentric drive that comes naturally to me and many others. As a Catholic and a sinner, it’s still the difficult part too. Charity means sacrifice. Real hope means acknowledging my transitory and rather unimportant existence on this earth in the face of what lies afterward. Chastity means giving up my selfish, natural lusts for the sake of a solid marriage and stability of a family for the sake of my children. In a nutshell, life is not all about me! It is this central message that the Catholic Church has given me and I cling to it. It has astounded me for years how persons who consider themselves ‘true’ Catholics regularly supported public policy proposals that stripped the poor of any access to education, health and job training. It never fails me also; that the ones that constantly evoke Christianity is the one that least honors its precepts. If they had been in office 2000 years ago, they would have cut funds for turning loaves into fishes (excuse my drift) with due respect.

I would love to hear why it seems more important for the church here in USA to focus so acutely on the issue of contraceptives/obamacare instead of focusing on the plan’s aim to help many millions of the uninsured being able to take their kids to the doctor/hospital should they get sick.

It is also ridiculous to claim that the insurance mandate, which applies to secular employees, represents a new constraint on religious freedom. This is clueless piffle. This is based on an utterly false and ridiculous pretense…that religious freedom in the US is under threat. The practice of religion cannot be interfered with by the government; but it is a longstanding legal principle that religious belief does not constitute license to break the secular law. It is easy to see why Pope Francis would wish to distance the church from this kind of monomania. It is this kind of thing that gives our incredibly compassionate religion a horrific face. Surely, the Lord expects us to show mercy to the least among us who are alive as much as toward the unborn.