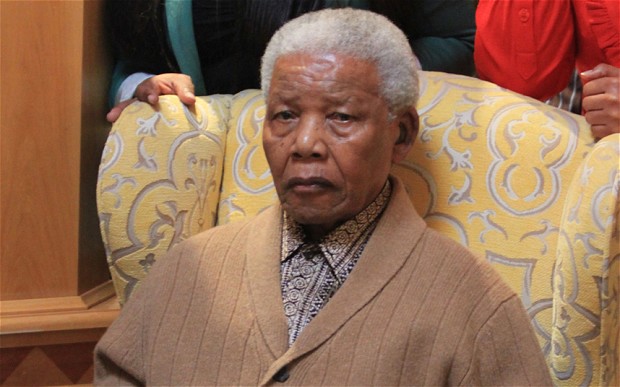 By Uchenna Ekwo
Former president of South Africa Nelson Mandela is dead. The liberation and anti-apartheid icon was 95.

South African president Jacob Zuma announced the Madiba’s death Thursday. Zuma ordered the country’s flag to be lowered at half mast in honor of the departed world hero.
Zuma paid glowing tribute to the world’s most outstanding political figure of the 2oth century.

According to reports, Nelson Mandela’s family and friends started gathering at his house last night, just days after his eldest daughter said the revered former South African statesman was “on his deathbed”.

Two of Mr Mandela’s granddaughters and Bantu Holomisa, a close family friend, were among those seen entering the house in the Johannesburg suburb of Houghton, along with military personnel responsible for the former president’s health.

Mr. Mandela spent 27 years in prison after being convicted of treason by the white minority government, only to forge a peaceful end to white rule by negotiating with his captors after his release in 1990. He led the African National Congress, long a banned liberation movement, to a resounding electoral victory in 1994, the first fully democratic election in the country’s history.
Mr. Mandela served just one term as South Africa’s president and had not made a public appearance since 2010, when the nation hosted the World Cup. But his decades in prison and his insistence on forgiveness over vengeance made him a potent symbol of the struggle to end his country’s brutally codified system of racial domination, and of the power of peaceful resolution in even the most intractable conflicts.

Years after he retreated from public life, his name still resonated as an emblem of his effort to transcend decades of racial division and create what South Africans called a Rainbow Nation.

CMPImedia will bring you more reports and analysis of this historic development in the days and weeks ahead.

Democracy on Trial in Kenya