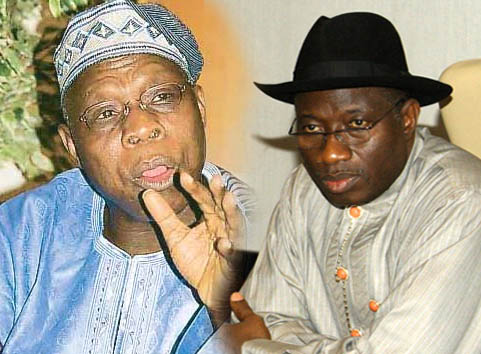 By Lawrence Ekechi
Thank you very much for your insightful re Nigeria/Presidents Obasanjo/Goodluck. From Tafawa Balewa, Generals Ironsi, Gowon, Murtala, Obasanjo to President Shagari; Generals Yar’Adua, Babangida- (Shonekan-3 month Interim civilian president; Generals Abacha, Abubakar to Obasanjo and Goodluck respectively, nothing changed. The only thing that changed/happened is they are all millionaires and buying property in Dubai and in a host of other countries at the expense of fellow Nigerians.
Obasanjo and Goodluck can do or say all they want, today’s nemesis is an extension of the corruption that has plagued our pre and post-colonial leaders past and present. Blinded by greed and lack of vision we lost the world’s investment destination nation that was Nigeria in the 60s to Indonesia, Malaysia, Brazil, South Korea, etc., etc. Today’s scenario is an extension of a bad relay race orchestrated by the aforementioned that failed before it even started and aided immensely by foreign agents. The result is we have endured a massive waste and loss of manpower and brain drain of our young Nigerian men and women
Until we realize that power belongs to the 167 million Nigerians, those who have vested interests to satisfy their selfish ends will not stop. Under this premise, those of you who are in the mass media can help by creating the awareness among Nigerians that power is in their hands to make the change.
You can do this by helping to launch a robust campaign backed by the truth so that the Youths of Nigerian can begin the march to a CONSTRUCTIVE NON-VIOLENT ENGAGEMENT TO TAKE THEIR COUNTRY BACK AND TO SAY ENOUGH IS ENOUGH.
Our past leaders – military and civilian have brutalized Nigerians in the violent corrupt manner of governance; either by shooting at us or by unscrupulous governance for they have done both. Therefore, this brings me to this. I quote, “In the establishment of a relationship of oppression, violence had already begun”; by Paulo Ferreira “Pedagogy of the Oppressed” Here is where we find ourselves in Nigeria. But, we as a people must NOT (repeat NOT) resort to any form of violence but through a concerted, constructive, sincere and informed effort to speak truth to power. Truth always conquers darkness.
Similarly, “No one can make you less than you are unless you let him,” Eleanor Roosevelt.
Nigerians are a very smart people and to be taken for granted by their governments over the past five decades plus, is the basest ingratitude.
The Print/Electronic media, etc., etc., has a duty to perform in this equation. Social media has helped to move the dissemination of information to a new dimension. The media must play its role in exposing the corrupt practices of our leaders no trifles, no favoritism. After all, and before now The Nigerian mass media was classified as one of the most vibrant in the world especially during the past several brutal military regimes that characterized our politics for many years.
There is a saying thus, “If you make a mess on a pathway on your way to the farm, you will meet flies on your way back”
“You may hold a kid’s toy only as long as your arms don’t ache you. When they do, because they will, it is a matter of when, you will drop the toy and the kid takes possession of what rightly belongs to him.”
What happens after this self-evident truth is any one’s guess. Remember also, families have been battered decimated, broken up, ruined, dreams shattered, people have lost their lives in a host of half-imagined nameless reasons due to lack of sustainable governance on the part of Nigerians leaders north, south, east or west.