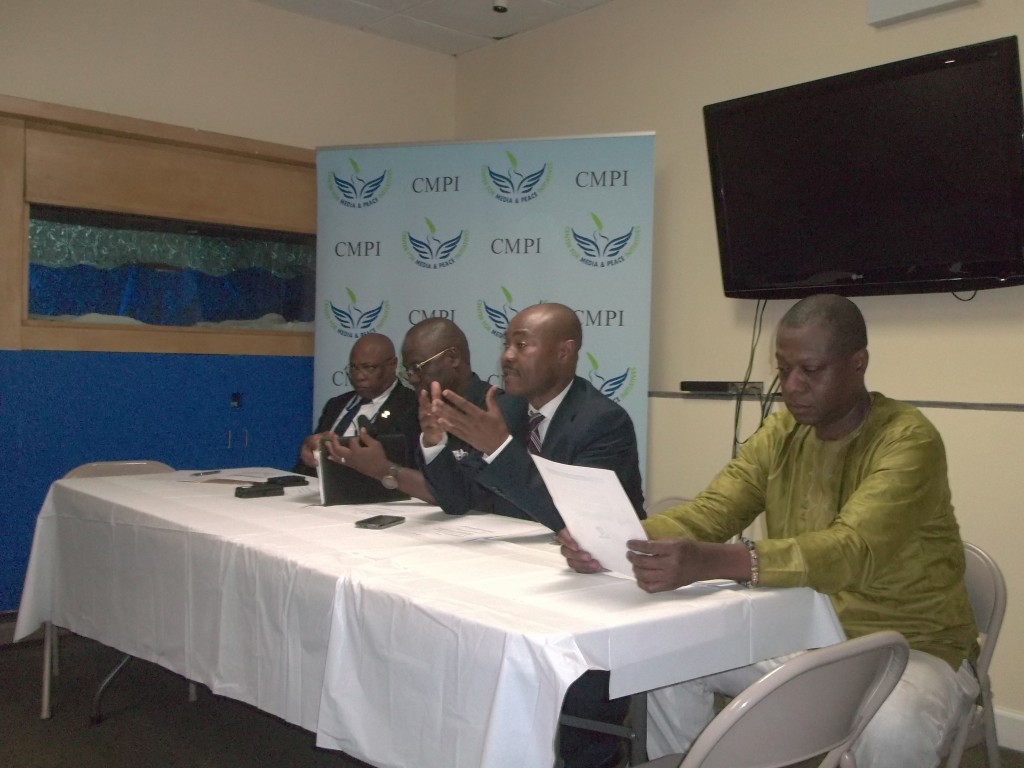 The dwindling influence of the mainstream media as well as the growing power of social media in orchestrating change were in full display in the recent power shift that occurred recently in Nigeria, Africa’s most populated country.

Addressing an audience at a CMPI Dialogue in New York, veteran Nigerian journalist and TV anchor, Mr. VinMartin Ilo described how savvy political strategists of the All Peoples Congress – APC of victorious Muhammadu Buhari employed the new media to the maximum.

Faced with the daunting task of re-branding himself from an image of dictator who was very unfriendly to the media as military head of state in 1984, noted Mr. Ilo, handlers of Muhammadu Buhari used every available media to re-create, re-package, and redefine the one-time military strongman.

At the forum organized by the Center for Media and Peace Initiatives (CMPI), Mr. Ilo reminded the audience that it was during Mr. Buhari’s military regime in the 1980s that some Nigerians and critics of his regime, including journalists and popular Afrobeat musician, Fela Anikulapo Kuti were jailed.

Fully conscious of his past image, and coupled with his advanced age, the compromised nature of the traditional media, the Buhari campaign keyed in to the over 75% of Nigerians with access to telephones and social media such as Twitter, Whatsapp, Instagram, Facebook among others, to facilitate and deliver their political messages. The team also identified and targeted younger generations that were unborn during the tenure of then Major General Buhari.

The laundered image of a hitherto, perceived dented one was repaired and polished and vigorous and poignant political campaign messages delivered to the populace. Mr. Ilo added that for the first time in the history of Nigeria, not only was an incumbent President kicked out of office through the ballot box, some members of both the upper and lower houses of the National Assembly also lost their seats.

In a way, the animosity towards Buhari due to his past suppression of the media failed to match the perception of his incorruptibility. “ Buhari may be viewed as an enemy of the traditional media, but the electorate considered his stand against corruption as credible”, said Mr. Ilo.

The focus of APC prior to the election was that they had an entirely new person. That Buhari had seen the light and changed. Social media played a key role in promoting him. There are a 170 million Nigerians and 123 million have access to cell phones. 55 to 50 percent of citizens have access to the Internet. This means that three quarters of all Nigerians have a cell. The Buhari camp used Facebook, Twitter, Watsup, etc. Young people plaid a key role, since many of them didn’t know about his past as a dictator. The APC also brought in foreign media experts to help to run the campaign.

The mainstream media was dominated during the elections by two front line institutions: The Nigerian Television Authority and the Federal Radio Corporation of Nigeria. There were also some independent networks.

The main problem, Ilo faces as a TV Anchor, and to large extent his country’s media, is that it is challenging to maintain journalistic independence, since he himself as anchor has to procure advertising revenues, which challenges professional independence.

During the election the government in power spent lots of money imposing considerable content on the mainstream media. They said a lot about Buhari’s imposition of the death penalty to drug dealers, to scare voters away from him. But, it did not stick, hence the outcome of the election in favor of Buhari.

But the APC was skillful at using their candidate’s military background as a guide for his future success in bringing security back to the country and defeating terrorists.

So the media was center stage during this campaign. But what moved the vote towards Buhari was people’s hunger for change. But, Ilo expressed the hope that  Nigerians would not live in fear because of Boko Haram or to behave in the manner that Americans have reacted towards terrorism in recent years.

Perhaps, the main weakness of the Buhari campaign lies in the fact that the campaign was fought to seize power, but no clear plans of what to do with this power once it was seized. It reminds one of Mario Cuomo – former New York State Governor’s famous quote “ You campaign in poetry. You govern in prose.”

It means that the poetry of campaigning is lofty, gauzy, full of possibility, a world where problems are solved just because we want them to be and opposition melts away before us. The prose of governing is messy and maddening, full of compromises and half-victories that leaves a sour taste in one’s mouth. Governing, however, is also specific where campaigning is usually vague.

In his remarks, Dr. Uchenna Ekwo, president of Center for Media & Peace Initiatives, New York extolled Nigerians for the peaceful outcome of the election, saying that it called for celebration in the media. “If the elections had ended in violence, Nigeria would have continued to dominate the headlines of every imaginable international media organization”, Ekwo said.

He expressed the hope that the media would put a spotlight on the Buhari administration to help in the restoration of normalcy in the country.

The forum made up of people from different countries used the opportunity to discuss wide ranging issues including historical governance is Africa.

Dr. Kwame, started saying that the weight of history is not rationalist, but traditionalist, and that it was necessary to be original. With this approach, based on tradition and innovation, it would become possible to come up with an African way towards the future.

He reminded the audience of Max Weber’s three major sources of legitimacy: tradition, reason and historic and charismatic. The monarchic tradition was seen as based on the popular belief that the monarch should always retain power. The rationalist approach inspired representative democracy. For him today’s focus in Nigeria is on democracy and not on tradition. For him, the reason why Nigerian people are so excited about this new president is because they feel that their vote counted.

Ghana-born Kofi Ayim, who’s just written a book on African traditional leadership, said that the European colonists changed and degraded the role of traditional leaders because they were concerned with the effectiveness of this system undermining their colonial interests.

He explained that the Akan Court in Ghana, for instance, elected kings with executive duties, since they had to make decisions and being the community’s mouthpiece; judiciary duties resolving conflicts in the community and they could promulgate new rules exercising their legislative duties. Using the drummers they had a media system to communicate with their people.

In these duties and power to communicate, Kofi saw parallelisms with the three powers of modern democracies and the existence of the fourth power encompassing today’s media. The king’s power was not greater than that of the people around him, since it was based on consensus building. He said that, since the Europeans wanted to control Africans, they destroyed this system. As a consequence, now African leaders want to promote western style democracy.