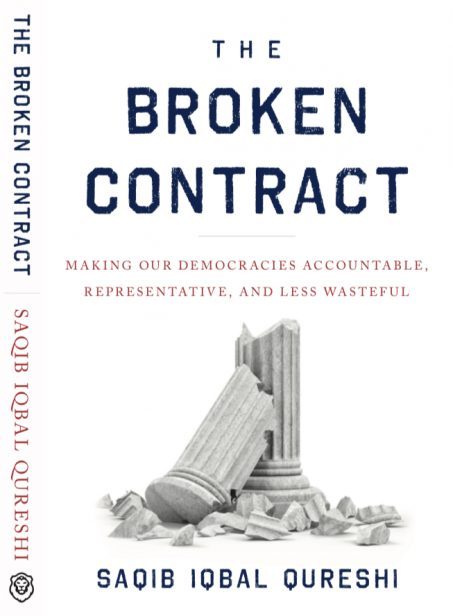 Around the democratic world, citizens seem to be in outright revolt against government and the elite. Should that be surprising? Saqib Qureshi points out that, between 1989 and 2019, “the top 1 percent of Americans by way of wealth became US$21 trillion wealthier while the bottom half lost $900 billion.” Is it any wonder, as Qureshi points out, a miserable 58% of Americans turned out to vote in 2016, which may have been one of the most significant elections in the recent history of Western civilization?
But many other writers have approached these facts and gone nowhere interesting with them. Which is to say, I have to admit I approached Qureshi’s latest book, The Broken Contract: Making Our Democracies Accountable, Representative, and Less Wasteful (August 4, 2020), with some degree of trepidation. Would this be more of the same? I am excited to stand corrected. The book is by turns witty and wonky, clearly well-researched, thoughtfully written, pleasingly approachable, pleasantly accessible, and provocative in all the right ways.
Qureshi has all the right facts at his fingertips, presenting an argument that is as compelling as it is necessary: “Our governments are not meaningfully representative.” The “people in government,” and especially the elected officials, he demonstrates, look, sound, and earn nothing like the citizens they ostensibly represent. He is courageous enough to bring emotion into this analysis: Such unrepresentative governments lack overall in one critical ingredient. “Empathy,” he writes.
Those in power are more male, whiter, and wealthier than the demographically shifting population they supposedly serve. As such, they don’t understand the people they govern. They don’t seem to want to, or at least, they seem content not to. It is the unrepresentativeness of government, Qureshi proposes, that led to a class of leaders fully willing to power this wicked wealth inequality, pursuing policies that bankrupted the poor, shattered the middle class, and launched the upper classes into high orbit.
Therefore, Qureshi argues, appealingly and creatively and surprisingly, the failures of western democracies, and especially the failures we see in Anglo-America—Qureshi is a Canadian of British origin—“are not entirely economic.” Rather, as Qureshi contends, “the mechanics of our ‘democratic’ government … triggered much of today’s economic challenges in the first place.” In other words, it is not the economy, stupid. That’s the effect—not the cause. How different and refreshing a perspective from what we often hear.
At a time when we are having necessary and overdue conversations about race, representation, identity, and ethnicity, The Broken Contract proposes that a failure to reflect who we are results in governments that don’t care how we are. This is one of the most appealing insights in an appealing book, but it is by no means the only one. What the reader will find is sober, rational, grounded, and personable analysis, accessible to and interesting to a person from the right, the left, or the center—because Qureshi refuses lazy categories and partisan cheerleading.
The Broken Contract is organized into four parts; the first asks the bigger questions, like “How did our democracies get into the circumstances we now find them and ourselves in?”
The second, third, and fourth parts address the three major issues of government waste, representation, and accountability. In each part, the problem is capably diagnosed, and genuinely thoughtful, post-partisan solutions are presented by an author with the right credentials. In addition to serving as an advisor to several Western governments in the past, Qureshi is the author of a previous book, Reconstructing Strategy: Dancing with the God of Objectivity. His doctoral work, meanwhile, was completed at the London School of Economics.
I enjoyed reading this book and returning to its arguments time and again. It was not only informative—but reassuring. When the loudest voices are the likeliest to be heard, a sobering assessment of where we are headed, and how now to change direction, is urgently needed. Qureshi has outlined for us a path forward, back to the promise of democracy and away from its betrayal and deterioration. Whether we take it, however, is up to us.

Dr. Uchenna Ekwo is of the Department of Mass Communications, Medgar Evers College of the City University of New York.

Pandemic or plague: Coronavirus is equalizer for Kenyans