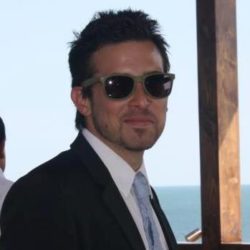 Joseph Hammond is an award-winning journalist and the managing editor of New Africa Daily. He is a fellow with the African Union’s iDove program and the Vice Chairman of CMPI’s Governing Board.

A former Cairo correspondent for Radio Free Europe, Mr. Hammond has also reported from four continents on issues ranging from the Arab Spring to the M23 rebellion in the Eastern Congo.

As a consultant, Mr. Hammond worked for the Politico Infocus, Oxford Business Group, Global Integrity, and has also worked as a consultant on international aid projects related to conflict issues. In these roles, he has worked in Qatar, Egypt, Turkey, Indonesia, Bahrain, Jordan, Ghana, the Czech Republic, and elsewhere.

He was a 2014-2015 Fulbright-Clinton Public Policy fellow with the government of Malawi. Hammond has also held fellowships with several think tanks including the National Endowment for Democracy, the Atlantic Council of the United States, International Center for Journalists, the Heinrich Böll Stiftung North America Foundation and other organizations.

His international coverage has ranged from reporting on an FDLR terror attack in Rwanda to a man who fought a lion in Mansoura in Egypt. In 2013, Hammond embedded with the  M23 rebellion in the Eastern Congo becoming one of the last journalists to do so before the group’s rout by United Nation’s forces.