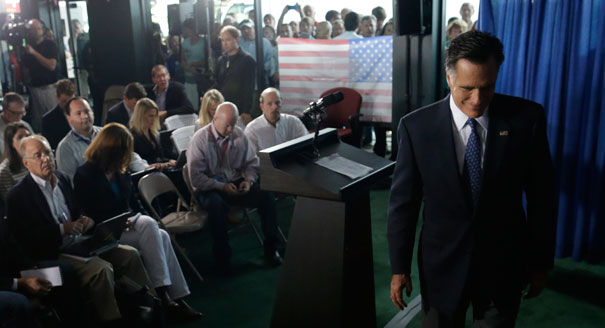 It’s one of the oldest tricks in the Republican playbook: In times of political crisis, blame the liberal mainstream media.

Former presidential candidate Rick Santorum attacked the media and “smart people” for not being on the side of conservatives in a speech to the Values Voter Summit recently.

“We will never have the media on our side, ever, in this country,” Santorum, a former Pennsylvania senator, told the audience at the Omni Shoreham hotel. “We will never have the elite, smart people on our side.” The media “doesn’t like the other side,” Santorum said. “And not necessarily, I would argue, because they agree with them, but because they can influence the country.

Santorum’s outburst is emblematic of current assessment of media behavior in the ongoing presidential election campaigns. The leaked infamous video of Governor Romney insulting a section of the American electorate is already being seen as an attempt by the media to discredit the Republican presidential candidate.

So why does the Republican Party play the victim always in political journalism?

Whether justified or not, attacks against the press have served as a conservative defense mechanism for decades: From George H.W. Bush’s “Annoy the media!” bumper sticker in 1992 to Sarah Palin’s criticisms of the “liberal lame stream media” in 2008, to the billboards and advertisements around the country this year that read, “Don’t believe the liberal media!”

But in an election season where leading conservative voices have often led the charge in faulting their candidate, Mitt Romney, over his campaign strategy, his penchant for secrecy, and the vagueness of his policy platforms, “blame the liberal media” has become a problematic rallying cry. Traditionally, conservatives have locked arms and defended the standard bearer when he’s on his heels — but since Romney emerged as the presumptive nominee, there has been a pervasive feeling among establishmentarians and right-wing pundits alike that Romney is not their man.

Recently, The Wall Street Journal’s editorial board slammed Romney for being too vague on his health care policy proposals. The Weekly Standards’ Bill Kristol knocked the candidate for running a “pre-Ryan sort of campaign,” comparable to that of Michael Dukakis in 1988. Radio show host Laura Ingraham chastised Republicans for losing what should be a “gimme” election, and said the party should be “shut down” if Romney doesn’t beat Obama. Rush Limbaugh suggested that the party was insufficiently conservative. And this was just the latest round in the ongoing criticism Romney has had to face from his own side over the past year.

In that context, it is difficult to see how this past week’s rallying cry against the “liberal mainstream media” — over the media’s coverage of Romney’s criticism of the president’s foreign policy and of Obama himself — lasts beyond the current news cycle. The ambition of such attacks has always been to deflect criticism against the right and demonize a coalition opposition on the left. But even leading conservative voices who level criticisms against the political press, caution against relying on a Palin-style anti-media effort.

Leading conservative journalist, Bill Kristol wrote that Romney was “right to reject the counsel of the mainstream media, which is to keep quiet and give President Obama a pass,” and that the media does have a liberal bias. “There is a ‘gotcha’ culture, and they’re happier to play ‘gotcha’ with Republicans than with Democrats,” he said.

But Kristol also said it was “always a mistake” to rely on anti-media attacks to make an argument. “I have a sentence about the media in my piece, which is really about foreign policy, but it shouldn’t be the consensus of conservatives in general to blame the media,” he said.

John Podhoretz, who wrote a searing attack on the media’s criticism of Romney in  New York Post, made a similar argument: “Blaming the media can be a crutch, and Romney is open to all kinds of criticism, but this was a unanimity of opinion from a press corps that votes 90 percent Democrat,” he stated. “At this point, the referees are the fans: these are people who have the same opinion about things, their positions harden and grow and solidify, and it becomes the consensus.”

In defining “the media,” Podhoretz made the point of distinguishing the opinions of liberal and conservative pundits, such as himself, from a mainstream consensus defined, as he puts it, by “CNN, NBC, ABC, CBS, The New York Times, The Washington Post, POLITICO, and The Associated Press.”

“If Josh Marshall wants to proselytize over at Talking Points Memo, that’s fine. Anyone can write whatever they want,” Podhoretz said. “My problem is when guys like Mark Halperin [of Time Magazine], John King [of CNN], Mark Murray and Chuck Todd [both of NBC] simply pick up that ball and run with it.”

Indeed, the notion that Romney had made a poor political calculation in blasting Obama after the attacks in Cairo and Libya became the consensus. On his blog, Halperin wrote that “the Gang of 500” — the political insiders and reporters who drive the daily media cycle — was likely to see Romney’s attack against Obama “as one of the most craven and ill-advised tactical moves in this entire campaign.” The observation — one of those frequent instances in which personal analysis is attributed to the “conventional wisdom” — echoed across social media and in fact became the conventional wisdom.

“The press really took the ball up on that, and ran with the Obama administration — there was a herding, flocking, and schooling behavior,” Rick Wilson, the Republican media strategist, argued. “They all run to the sound of the bell ringing, slicing of the onion thinner and thinner on how Romney handled this, as opposed to actually addressing the important question at hand: Is the Middle East about to blow up and turn into a river of blood?”

If the “Gang of 500” was quick to come to consensus that Romney had blown his response to the attacks on U.S. diplomatic facilities, the right was just as quick to go looking for evidence of a media conspiracy.

Within hours, the conservative blog Right Scoop posted video of CBS’s Jan Crawford and NPR’s Ari Shapiro on a hot mic discussing the questions they would ask Romney regarding his attack on Obama — as if two reporters working to make sure their question would get answered was evidence of some grand plot to ruin the GOP candidate. The video got picked up by Drudge Report, and on Fox & Friends conservative writer Michelle Malkin called the two journalists “tools’ and “stenographers” of Obama, and said their dialogue underlined “the obituary of mainstream objective news.”

Meanwhile, many of the same voices that had been lobbying hand grenades at Romney — Kristol, Ingraham, National Review editor Rich Lowry, the Journal, Limbaugh — circled the wagons and rallied to Romney’s defense.

In the Wall Street Journal, the editorial board wrote that Romney’s “political faux pas was to offend a pundit class that wants to cede the foreign policy debate to Mr. Obama without thinking seriously about the trouble for America that is building in the world.”

Over at Red State, conservative blogger and CNN contributor Erick Erickson said the media “be clowned itself” [sic] by focusing exclusively on Mitt Romney’s statement while ignoring major developments out of North Africa and the State Department.

Podhoretz made a similar argument when he pointed out in his own column for the Post that after complaining about Romney’s decision to “politicize” the violence overseas by attacking Obama, no one in the press called the president out for swiping at Romney in an interview with CBS News that aired the same day at 4 p.m.

The anti-media line of attack has now been taken up by the Romney campaign, where staffers are echoing the lines from supportive editorials: “I love all these reporters saying that they thought the Democratic convention was better,” one senior adviser told BuzzFeed today. “Of course, they did. It’s like a steak lover saying they like a steakhouse. They served what 90 percent of reporters love. And they liked it? Shocking.”

But Republican strategist Steve Schmidt cautions against relying too heavily on the anti-media crutch.

“Every single presidential campaign — Ronald Reagan, George W. Bush — has to navigate this issue of bias with the media, and the first rule of navigating it is to understand that not every criticism is evidence of media bias,” Schmidt, the chief strategist for John McCain’s 2008 campaign, pointed out. “This is just part of the scrutiny that comes with running for president: Every day is playoff football, and you can’t always make the claim that the coverage is through the prism of bias.”

Wall Street Journal columnist Peggy Noonan, who in a departure from some of her fellow conservatives criticized Romney’s handling of foreign policy situation (“he looked weak,” she said on Fox News), said charges of media bias were legitimate but indicated trouble for Romney’s campaign.

“Mainstream media is stacked toward Democrats and against Republicans, toward liberalism and against conservatism. That is the way it is, and winning Republicans have to break through the prism with the force of their thoughts, their philosophy, their words and persona,” she said. “It’s hard: When it’s working they know they have a guy so strong he broke the prism. When it’s not, they are angry at the prism. Their anger is legitimate and deserved, but it’s also a sign of unease.”

Part of this article was culled from Politico

Is Nigeria a failed state?