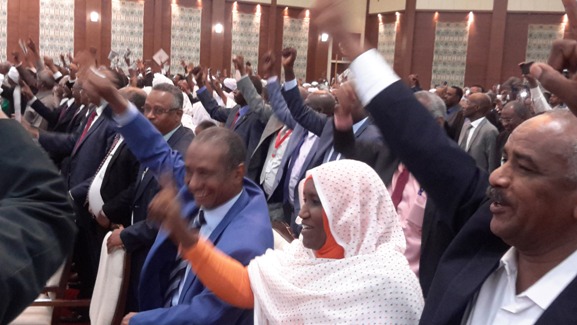 On Monday October 10, Sudan celebrated the conclusion of the historic National Dialogue intended to give birth to a New Sudan and new constitution.  Joining Sudan’s President Omar al Bashir on the dais were the heads of state from Egypt, Uganda, Chad and Mauritania, all who spoke in support of the agreement along with representatives from Russia, China, Ethiopia, and the Islamic Cooperation Organization. The following day President Bashir was seen dancing at an outdoor rally in front of cheering crowds. A senior member of the ruling National Congress Party-(NCP) told CMPI Correspondent that the significance of this agreement is only second to the founding of Sudan in 1956 when Sudan liberated itself from British colonialism. President Bashir also announced extending the cease fire between government forces and military opposition groups in Darfur, Blue Nile, and South Kordorfan until the end of the year. Resolving the long standing internal armed conflict is essential for Sudan to proceed to the vital task of developing its flailing economy and improving the living standards of its people in the face of the US led sanctions against the African nation. Undoubtedly, the sanctions are inflicting undue hardships and pose critical obstacle for Sudan’s advancement on the path of progress following the remarkable accomplishment of the National Dialogue.

The signing of the document on National Dialogue is the culmination of a more than two year process that began in July 2013.  Recognizing the need for the NCP to initiate a transformation of the country after economic and political difficulties following the separation of South Sudan, President Bashir called for a far reaching and transparent National Dialogue in January 2014 to reexamine fundamental concerns of the population. These included issues of peace, unity, the economy, external relations, freedom of speech and press. One of the most important concepts that were addressed included that of citizenship and identity. In what appeared an invocation of Sudanese pride, one member of the Umma Federal Party participating in the National Dialogue who preferred anonymity stated “we are not Arab nor African, but Sudanese in Africa?”      Seventy-four political parties and thirty-four armed movements joined the dialogue. Three armed rebel groups refused to sign the National Document; the JEM, the SLA, and the SPLM-N, but the opportunity for them to sign will remain open. The political side of the dialogue was conducted in the “seven plus seven plus one” discussions between the NCP and the opposition parties and movements. For the society at large, tribal leaders, religious groups, NGOs, unions, civil society, respected individuals, and citizens were invited to join the dialogue. Women represented a large minority-33% of participants in the process.

Sudanese from all parties and sections of society are hopeful that the National Dialogue will finally lead to peace and stability in Sudan, which has been hampered by internal strife for approximately fifty of their sixty years of independence. A new constitution will be written with new laws to embody the fresh conceptions that have emerged from this multi-year process. Supported by the platform created by the National Dialogue, Sudan has a propitious moment to articulate and implement a visionary national economic program to realize its full economic potential and lift its people out of poverty. To help unify the nation, which has suffered from years of civil conflict, all parties should coalesce around a program for investment in the most vital categories of infrastructure; electrical power, railroads, water management, roads and finally cultivate Sudan’s huge amount of fertile land that has never been fully exploited. Such an infrastructure led developmental approach will not only increase the productivity of the economy for the benefit of all citizens, but will provide meaningful productive employment that will give the youth hope for the future.

Lawrence Freeman is a political and economic analyst for Africa