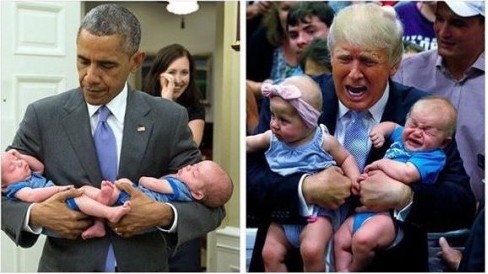 Republicans have promised to repeal and replace the ACA. They are now in a position to actually do that and, low and behold, they have no replacement. They want to repeal it and wait for another 2 years to replace it. Suddenly, people are entertaining the possibility that they might actually be cut off from any possibility of getting health insurance. One doesn’t have to be Sherlock Holmes to recognize that making health insurance affordable for low-income people is not a high priority for some politicians. I wonder how many of the people who have recently signed up for insurance have spent the last few years parroting the talking points about “tyranny” of the ACA. As Josh Hill noted, “there is something grimly amusing about this situation”.

It is ridiculous on the face of it. Yes, it is ridiculous for us to have to stress over whether Congress is going to cancel the affordable care act, leaving people with no insurance. If this program needs tweaking, do so, don’t drop it. Maybe the carriers themselves deserve some scrutiny; they are notorious for raising rates every year, Obama care or not. I am a medical doctor well-versed in health policies, but it doesn’t take an advanced degree to know that what the Republicans are proposing defies common sense. ACA could use some tweaks, easy to make. The people I have talked to are pleased to have benefits, although they’d like to see premiums kept down. It needs improving, not a death knell. People need to flood social media in support of Healthcare for all, not only those with great jobs, or the wealthy.
What a bizarre world we live in. People voting for a party that says they will repeal the ACA and then the same people rush to sign up for it in case they really meant they’d take it away. “Make America Sick Again”, a veiled reference to Trump’s campaign slogan “Make America Great Again” being parroted by Congressional Democrats may seem to be a partisan theme but in reality throwing away the ACA will definitely guarantee more Americans left with limited options when they get sick. So, does a Trump Administration desire to return to pre-Obamacare era and deny healthcare from more than 20 million Americans?

ACA didn’t just make health care insurance available for 22 million (or so) Americans. 137 million Americans saw improvement in their own health insurance by expanding coverage for “preexisting conditions”, ending lifetime caps, making coverage for offspring up to age 26, and other insurance reforms. A wide swath of the public needed the ACA and found relief. Only in America can a one week stay in the hospital cost more than your average middle income earners entire annual salary. Repealing the law would throw all those millions of Americans back to the sharks, to be ripped off by rotten insurance plans that take fat premium payments from us and refuse to cover illness when needed. Repeal and replace strategy doesn’t actually solve any of the problems. In fact they will make most of them worse. All of the major components of the affordable care act work together and you can’t just kill some of them without messing everything up. Simplest explanation is the old joke about a motorist who runs over a pedestrian, then tries to fix the damage by backing up….and runs over the victim a second time.

The linchpin in the whole thing is the individual mandate which is the one component that is most unpopular. Everything else is pretty popular. You can’t kill the individual mandate and keep the prohibition against denying coverage for preexisting conditions or the lifetime limits. Not unless you want insurance markets to completely collapse in a death spiral of rising costs.

ACA has been portrayed as collapsing under its own weight, unable to hold down health costs or provide the insurance choices its advocates promised. Now, let’s throw a spanner in the works of this argument…. regarding the higher than expected health costs and subsequent bailing of insurers, wasn’t this attributed to the pent-up demand for medical care of patients? Many had not had medical care for years prior to the ACA. As such, their medical conditions went untreated and were worse, and thus more expensive to treat, than if they had medical care all along.

If the population is too sick to profitably insure, then perhaps the private insurance market is not the right model to use. Health care for profits is a violation of basic human right! I always thought that when these insurers go to church for show and hear the priest/pastor say that “it’s better to give than to receive” they are all laughing inside their hearts and minds and going…right!, only for suckers. Like Jesus, healing the sick for free, that’s nuts! Pathetic lack of humanity and empathy vacuum…isn’t it? Perhaps the ACA needs a public option as a complement to the private insurers. Or, perhaps we need Medicare for all to provide a basic and humane level of care, with private insurers filling the demand for supplemental coverage. I think health care shouldn’t be a privilege; it should be a right for all. If you are wealthy enough for the bells and whistles, lovely, but your wealth should not determine your treatment. Just remember, a healthy population is a productive population. Healthy people work, start businesses, and pay taxes.