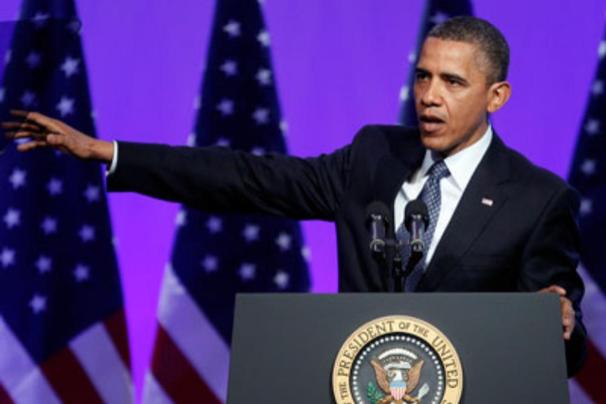 President Obama says the media can play a role in breaking Washington’s partisan gridlock by the way they shape debates on public policy.

“One of the biggest factors is going to be how the media shapes debates,” he tells Editor Frank Foer and owner and publisher of The New Republic Magazine, Chris Hughes. “If a Republican member of Congress is not punished on Fox News or by Rush Limbaugh for working with a Democrat on a bill of common interest, then you’ll see more of them doing it.”

According to analysts, the right-wing media, especially Fox and Limbaugh, have an outsized influence on Republicans — and are arguably more powerful than most members of congress. But Obama notes that left-wing media plays a role in shaping political debate, as well.

“The same dynamic happens on the Democratic side,” he said. “I think the difference is just that the more left-leaning media outlets recognize that compromise is not a dirty word. And I think at least leaders like myself—and I include Harry Reid and Nancy Pelosi in this—are willing to buck the more absolutist-wing elements in our party to try to get stuff done.”

The president also faulted nonpartisan media outlets for their adherence to “he said, she said” journalism, which places equal blame on Democrats and Republicans when, according to the president, Republicans should bear more blame.

“That’s one of the biggest problems we’ve got in how folks report about Washington right now, because I think journalists rightly value the appearance of impartiality and objectivity,” Obama told Foer and Hughes. “And so the default position for reporting is to say, ‘A plague on both their houses.’ On almost every issue, it’s, ‘Well, Democrats and Republicans can’t agree’—as opposed to looking at why is it that they can’t agree. Who exactly is preventing us from agreeing?”

Obama also suggested that the media’s obsession with confrontation presented a roadblock.

“Some of the institutional barriers have to do with our media and what gets attention,” he said. “Nobody gets on TV saying, ‘I agree with my colleague from the other party.’ People get on TV for calling each other names and saying the most outlandish things.”

But the president is apparently interested in the media’s well-being. Foer and Hughes describe Obama asking “in granular detail about the health of the media business.” He also expresses frustration with “his own difficulty accessing newspapers and magazines on his ultra-secure presidential iPad, which doesn’t allow him to enter required subscriber information.”

Hughes, an Obama donor who worked on the 2008 campaign, bought The New Republic last year. The newly redesigned magazine was launched on Monday.
This report was first published in Politico.com and New Republic.com