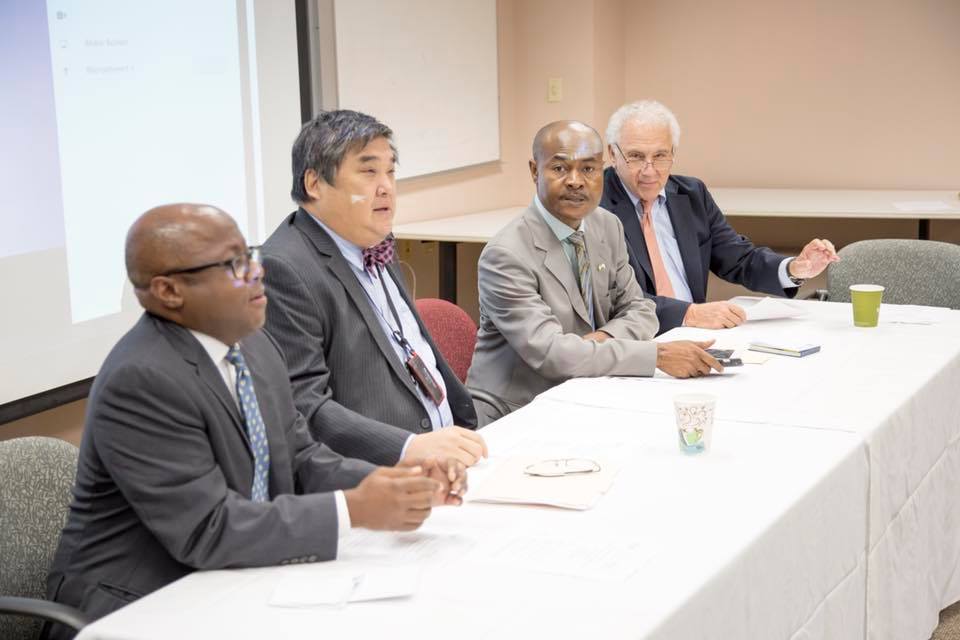 Following extensive debate, discussion, and dialogue, participants and speakers at the 2017 Gershowitz Conference on Media and Democratic Governance agreed that the media reports and policies on global migration fuel wrong perceptions about immigrants and refugees. Perception matters, says Keynote Speaker, Dr. Ariane Chebel d’Appollonia of Rutgers University’s School of Public Affairs and Administration who has spent many years conducting research on immigration.

Professor Ariane identified wrong perceptions of migrants as posing economic and social threats as well as threats to national identity and national security.

Relying on relevant theories and data with illustrations, Arianne told her audience “one is more likely to win a mega millions jackpot than being killed by a refugee in a terrorist attack”.

Firas Kayal, from the Office of the United Nations High Commissioner for Refugees, New York Office, amplified the views of the soft-spoken Ariane, saying that contrary to public perception, poor countries host more migrants than rich countries of the west.

“We are calling on the international community to share the burden of these countries… often a lot of people in power; a lot of politicians; people in in the academy; and even some journalists think that the largest number of the displaced people around the world are hosted by the West or and this is completely untrue because eighty five percent of the sixty six million people are actually hosted by poor countries and middle income countries”.

The problem, he said, is that while the world attempts to solve crises in different regions, more crises erupt in cycles.

The cycle of violence that bred refugees and global migration attracted the attention of Milton Allimadi, the Editor-in-Chief of Black Star News who joined other panelists to pick holes in the stereotypes and negative portrayal of immigrants in the west.

In the opinion of Allimadi, most migrants who flee their countries do so out of necessity and mostly as a result of domestic and international pressures.

He singled out Libya, Syria, and Uganda to drive home his point.

The West destabilized Libya that was once a stable country thereby perpetuating violent conflicts in the Sahel; the weapons stolen from Libya are believed to have strengthened terrorist organizations such as Boko Haram and Al Shabab.

On the other hand, the proxy war among world power in Syria has created unprecedented refugee situation in the world. In Uganda, said, Allimadi, the West turn a blind eye to malfeasance of the Museveni government’s war against his people.

Under these circumstances, people flee for safety abandoning their homes and jobs to seek refuge in the West and then the government becomes unreceptive and label the migrants as lazy and terrorists? This is the irony of the immigration debate.

The quick reaction of President Trump to the recent attack in New York by an immigrant from Uzbekistan who killed 8 compared to his reaction to the Las Vegas shooting that killed more than 50 was singled out as a classical example of using immigrants as scapegoats for what Professor Ariane phrased as “security rhetoric conflating immigrants, asylum seekers, and terrorists and emphasizing security policies based on the blurring of the distinction between immigration controls and anti-terrorism”.

Ronald K. Chen, Co-Dean and Distinguished Professor of Law, Rutgers Law School and Michael A. Benjamin, Associate Editorial Page Editor, New York Post addressed the dichotomy of views by top US policy makers in the labeling of migrants as lawless and irresponsible group of people.

In the words of Benjamin, “I want to talk about what happened this week – where an immigrant for some reason decided he was frustrated with his life and chose to attack bicyclists and pedestrians on the West Side of Manhattan. And President Trump immediately spoke out on this issue and called it a terrorist attack and then proceeded to attack the visa programs that allowed that fellow into United States. To demonize individuals or entire groups of individuals when one person in this case commits an act of terror worse or a crime is not helpful”.

In his remarks at the conference, Dean of the School of Public Affairs and Administration, Rutgers University, Dr. Charles Meniflield noted that the discussion and debates during the conference enabled participants to investigate how the media policy makers shape immigration and social policies.

He expressed delight with the conference facilitators for giving prominence to the vigorous dilemmas associated with populism and data and in light of recent political developments in the United States and Europe.

Striking a similar tone, Mr. Massimo Tommasoll – Permanent Observer for International Institute for Democracy and Electoral Assistance (IDEA) to the United Nations spoke on the wave of populist sentiments across the world especially in Europe and United States.

He attributed the rise of populism to collapse of public trust on political parties and other institutions of democracy.

“Political parties are on trial; institutions are less trustworthy and hence politicians are running against establishment figures”, Tommasoli said.

In his view, both the mainstream and new media are challenged to embrace the new environment where citizens embrace the message of anti-establishment figures and thereby encourage reforms of political parties and emergence of new actors within the media industry.

Joseph Hammond, of the American Media Institute in Washington and of Center for Media and Peace Initiatives took a historical overview of populist leaders in American and other countries and remarked the wave of populism in the US has the potential to bring about change in the long run.

“We studied with lanterns, candles, or even firewood”