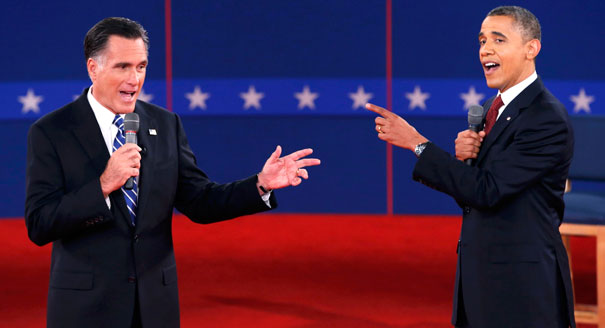 With three televised debates down, one more to go, and the political campaigns reaching a crescendo, the 2012 presidential elections have taken a toll on the credibility of the media as arbiters in the democratic process.
As has become evident in this campaign season, both Democratic and the Republican campaigns have been mired in falsehood. President Barack Obama and Governor Romney have excelled in stretching the truth at convenient times, thereby confusing the electorate. A clear example is on taxes. Whereas Romney’s tax plan calls for 20% cuts across the board, an increase in defense spending, and a cap on deductions, Obama’s tax plan is just focused on making the wealthiest 2% pay more in taxes.
On the campaign trail both candidates say things the way they like to say them but the television debates have done little to hold the candidates to sufficient scrutiny. Clearly, the policies of the both candidates are unable to resolve the deficit problem. Mitt Romney argues that he would not have any policy that adds to the deficit but further tax cuts and increased military spending will definitely add to the deficit. On the other hand Barack Obama has yet to provide a credible solution to reduce the deficit beyond letting the Bush tax cuts to expire for the wealthiest 2% of the population.

As serious as the issues in the 2012 election are to America’s future, it is time for the media to call out the candidates when they lie. Voters may have become weary of lack of principle or flip-flop of candidates on different positions, but journalists should begin to use appropriate words to describe the positions of politicians on different issues. The use of such euphemism as flip-flop to describe a politician who lies or changes like chameleon should change. If a politician is caught lying, he should be told in unmistakable terms. Some may argue that it is indelicate to accuse a president or presidential candidate of telling lies. At the same time, such individuals who attain such positions should be honorable enough to always tell the truth. After all, Caesar’s wife should be above suspicion and to whom much is given much is expected.

For example, Romney’s image got a beating when Candy Crowley – the moderator of the second presidential debate corrected the Republican candidate’s assertion that President Obama took two weeks to call the attack in Libya an act of terrorism. Candy’s real time fact-checking was good and that is what an umpire is supposed to do. That is what other journalists who are interested in America’s future should do more often. Chris Wallace of Fox New Network is another journalist who has demonstrated high degree of professionalism in questioning politicians about the veracity of their claims. His interviews with Obama administration’s UN Ambassador Susan Rice on the Libyan attack imbroglio, and Republican vice Presidential candidate, Congressman Paul Ryan on the arithmetic of the campaign’s tax plan stand out as classical examples of how journalists should hold politicians accountable. The Sunday shows of different television networks such as CNN’s State of the Union, CBS’ Face the Nation, NBC’s Meet the Press, and Fox News’ Fox News Sunday host high profile politicians every Sunday and sometimes allow them to get away with some platitudes, rhetoric, campaign talking points, half-truths, and outright lies. The strategy of many of the hosts has been to repeat their questions in different phrases to get answers from an evasive interviewee. The hosts argue that the audience is smart enough to understand when a politician is evasive or not telling the truth. Admitted there are smart audiences but not all are and therefore need the host’s help in calling out the interviewee. Politicians should be told about their lies to their face instead of being polite to them when it is obvious truth suffers a setback.

In a fragmented mediascape, if journalists in traditional media organizations are unable to call out politicians’ mendacity, citizens will definitely use the booming and buzzing social media to call attention to questionable behavior of politicians. Today, citizens not only have the votes but also voices in the ongoing debate about the future of America. The twitter traffic that heralds the presidential debates is a proof of heightened political participation of citizens in the democratic process.

The news media should live up to its professional responsibilities – shine a spotlight on truth and falsehood by politicians who aspire to govern. Politicians’ lack of credibility should not be allowed to infect the media because a credible media system is a desideratum for a healthy democracy.