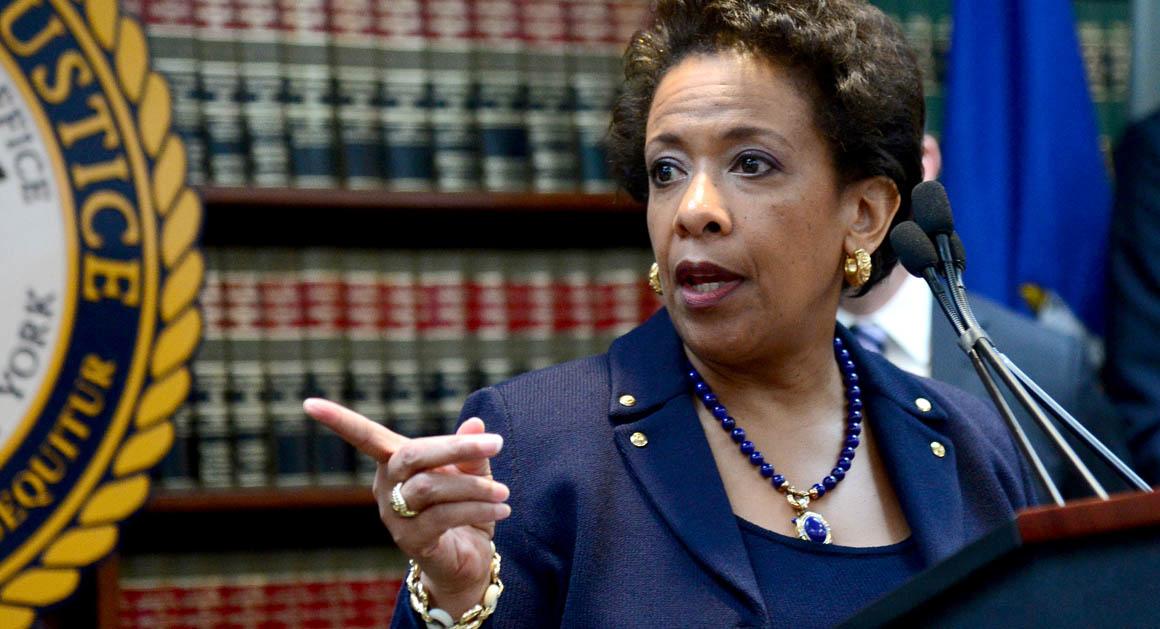 U.S. General Attorney Loretta Lynch holds a press conference to announce law enforcement action against FIFA Officials in a 47-count indictment at the US. Attorney's Office in Brooklyn, NY, on May 27, 2015. Nine FIFA Officials and Five Corporate Executives charged with racketeering conspiracy, corruption and money laundering. (Photo by Anthony Behar) *** Please Use Credit from Credit Field ***

The recent arrest of some officials of Federation of International Football Association – FIFA in Zurich, Switzerland took a lot of people by surprise especially considering that United States with an unimpressive record in soccer is leading the charge to cleanse the corrupt world soccer governing body.

Also in contention is the standing of United States to bring charges against the FIFA officers accused of money laundering and wire fraud.

The legality of the arrests and poor US interest in soccer, notwithstanding, what is important is that the dramatic development initiated by the new US Attorney General, Loretta Lynch signals that there is probably few hiding places for highly placed individuals who choose to be corrupt.

The FBI may have travelled across the Atlantic ocean to arrest suspected corrupt officials, it is also expected that the agency should put its nose in the home front to track ill-gotten wealth that come into the US through influential political and business leaders around the world.

Last year, I encountered one Kenyan-born, Isaac Newton Kinnity at the entrance gates of the United Nations on a one-man protest against the impoverishment of poor countries by rich nations who allowed leaders of African countries to stash away stolen money in banks located in the US and other western countries.

His protest probably did not gain traction but the arrest of FIFA officials in the Transparency International –designated least corrupt Switzerland is a reminder that if US could act swiftly to rein in on corrupt practices, the country should assume a Gestapo role in combating movement of illicit money from leaders of poor countries to the United States.

In part US claims it has standing in arresting FIFA officials because the fraud allegedly was perpetrated using banks in the United States. By the same principle, FBI should henceforth start arresting corrupt leaders in poor countries that transfer their ill-gotten money to US banks to buy houses, cars, or shares in lucrative capital market in the United States.

How about those who perpetrate violence and transfer money to buy weapons to kill fellow citizens in manufactured conflicts to further their political aspirations? Many warlords in conflict zones in Africa are believed to have financial connections around the world that fund internecine conflicts. The quid–pro-quo in exchanging money for weapons is not different from allegations of bribery, larceny, and extortion leveled against the FIFA officials arrested in Zurich.

It has been praises for newly minted top US law enforcement officer, Loretta Lynch who was known mostly as the woman who couldn’t get an up-or-down vote on her nomination as attorney general.

But after only a month in office, reports POLITICO, she could hardly have crafted a more attention grabbing debut than the dramatic announcement she made Wednesday of an American-led takedown of corruption in FIFA, the governing body of international soccer.

Newspapers, television and almost every imaginable news outlet around the world with exception of Russia glorified the arrest of the FIFA officials.

In seven years as chief prosecutor in Brooklyn, Lynch oversaw a slew of financial investigations that targeted some of the world’s biggest banks and won admissions of rigging multi-billion-dollar markets in mortgages and global currency.

But none of those cases managed to punch through the noise like the U.S. legal assault on FIFA and the arrests of seven of its officials Wednesday morning at a Zurich hotel.

Let’s hope that Lynch will make eliminating international network of corruption the central focus of her remaining 18 months in office and pas the torch to her successor in a fashion that it gradually becomes a trend.

Peaceful Sudan is in sight?