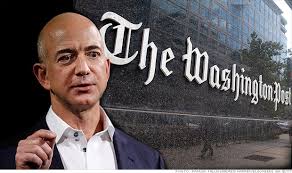 To learn that Washington Post has been sold less than a week after New York Times Company sold The Boston Globe is telling about the frenetic speed with which newspapers are going extinct.
New York Times aptly described as shocking to the media industry, the sale of The Washington Post, the newspaper whose reporting helped topple a president to the founder of Amazon.com, Jeffrey P. Bezos for $250 million.

What is really frightening is the prospect of a democratic society without a newspaper. The trend towards the decline of newspapers suggests that the Internet will ultimately wipe traditional print journalism as we know it.

In 2009, the 100-year old Pulitzer Prize winning Christian Science Monitor abandoned its daily print format and chose instead to go digital. Other publications are thinking of changing their business model to reflect the growing influence of the Internet in journalism.

The sale of the flagship publication such as The Washington Post to a savvy Internet entrepreneur with an estimated personal fortune of $28 billion sets the stage for turning off printing presses in parts of the world where Internet has become an essential part of life.

Almost everyone acknowledges the high cost of running newspapers in today’s challenging economic environment. Newsprint, delivery trucks, drivers, and circulation costs and many other expenses conspire to make contemporary newspaper management a herculean task. These challenges persist as circulation figures plummet. For example, the esteemed Washington Post struggled over the years with dwindling circulation figures and loss of revenue. In the past 7 years, the newspaper circulation declined by almost 50 per cent while in the past 6 months, it posted $49 million in lost revenue.

The story is the same in most newspapers and their worth is depreciating by the day. Consider the sale last week of The Boston Globe to John W. Henry, the owner of the Boston Red Sox for $70 million far less than $1.1 billion New York Times Company paid for the newspaper in 1993. Under normal business circumstances, the value of such a product ought to have appreciated over 20 years. But, it never happened and that means that traditional newspaper business is on a death spiral and as such has no value.
What is happening to newspapers is symptomatic of a larger disease afflicting journalism especially with regards to declining media credibility. Realistically, why should anyone read newspapers today? Traditionally, people read newspapers to get information about investigations and revelations about government and society which in most cases cannot be obtained from radio or television. Investigative journalism defined credible newspapers such The Washington Post. Bob Woodward and Carl Bernstein’s investigative reporting instigated the process that saw Richard Nixon resign as President of the United States while New York Times’ role in publishing the Pentagon Papers is still fresh in the minds of media historians and others.

There are lots of malfeasance happening in government, labor unions, Wall Street, Churches and Mosques etc that requires the attention of the media and that can help to bolster media credibility. But it appears that there is no appetite for investigation anymore. Instead, there is so much emphasis on celebrity journalism and reliance on press releases and news conferences; gossip journalism and infotainment disguised as news. Even more seriously is the polarized politics of contemporary society that pits the media into two major ideological divides—Conservative and progressive.

Journalism has become so much opinionated nowadays that even television stations no longer rely on their reporters for analysis. They depend on political hacks that go in the name of contributors or political analysts. The media-political complex is booming at the expense of serious journalism. Consequently, the audience has shrunk to a very tiny size that agrees to the political ideology of the newspaper of choice, an echo chamber of some sort.

While we may be concerned about the growing demise of newspapers, it is important to remember that in the history of mass communication, one form of communication often replaced another as society progressed technologically. The progression from the invention of printing press by Johannes Gutenberg in the 15th Century to the evolution of radio and television in the 20th century and now the Internet shows the constant improvement in the channels of communication at every point in history. What is significant is that in all these periods, society witnessed gradual erosion of control by media owners or proprietors. For example, in the 15th century, owners of printing presses determined access to the printing press as well as what gets printed. Thereafter was radio but the airwaves could not be controlled as much as the printing era. Television shared similar characteristics. And today, the Internet has moved journalism away from the traditional fourth estate of the realm to what Eric Schmidt, the Chairman of Google calls “interconnected estate” where access and admission is not restricted whether you are a professional journalist or not; rich or poor; and black or white.

The future of The Washington Post under the management of Amazon’s founder Jeffrey Bezos is promising considering his success in using the Internet to change the face of retail business. It may not surprise many people if the Amazon founder changed the newspaper’s business model to fit into a more cost-effective digital publication. How he will do it remains unclear but his pedigree as trail blazer familiar with ground breaking ventures should inspire confidence in Graham family (former owners of The Washington Post) and the entire staff and readers of The Washington Post.

In the final analysis, Bezo’s revolutionary instincts may change print journalism beyond what veteran media mogul Rupert Murdoch can accomplish. Time will tell!

Democratization of information and imperatives of sustainable development