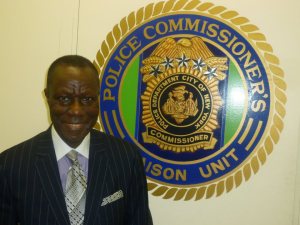 The field of candidates contemplating a run for Public Advocate Bill de Blasio’s job continues to grow with Sidique Wai an NYPD official of African descent joining the list.  Sidique Wai, an activist involved in African and Muslim outreach, told reporters he was “seriously thinking” about mounting a campaign for the job himself. Mr. Wai, who’s also the President of the United African Congress, described the possibility as “really of interest to me.”

“It’s an extremely important, influential position depending on what the individual brings to it,” the potential candidate added, energetically describing what he might do. “Let me give you a small example: I would bring government to the people, have people get the services they need on the streets….I would get government on wheels! I will go from borough to borough, seven times.”

Interestingly, Mr. Wai actually ran against Ms. James before, when they both lost to Councilman James Davis in 2001. Mr. Davis would later be assassinated by a political rival, leading to Ms. James winning the special election to replace him.

“Let’s do it, let’s let the best person win!” he exclaimed when we brought up the other candidates in the race. “When I do this right, I can tell you it will be a different race.”

Before we concluded our brief interview, we asked Mr. Wai if, as an NYPD official, he had a perspective on the police force’s controversial “stop-and-frisk” tactic, especially as Mr. de Blasio and the leading Democrats running to replace him have all come out strongly against it.

“There’s a lot of misinformation,” he explained, adding he would reveal his position during the course of the campaign, but that “there will be nobody running for citywide office” that will have the “pulse of the community” and the “experience” necessary to address the issue besides him.